The man who died following a stabbing in Kingswood, Co Dublin, this morning has been named as 39-year-old Gareth Kelly.

The incident happened in the Brownsbarn Estate as he tried to start his car to go to work.

Mr Kelly, who is originally from Tallaght, is believed to have been staying over with his partner in the estate, which is a small cul de sac.

His car would not start when he came out to go to work at 7am.

He had opened the car bonnet and was trying to start the car when he was attacked and stabbed a number of times, before collapsing and died on the street between two cars.

His body was removed to Dublin City Morgue and a post-mortem examination will be carried out tomorrow.

A woman in her 30s was arrested near the scene and is being held at Clondalkin Garda Station.

Detectives are investigating the possibility that the attack could have happened because Mr Kelly parked his car in the wrong parking space. 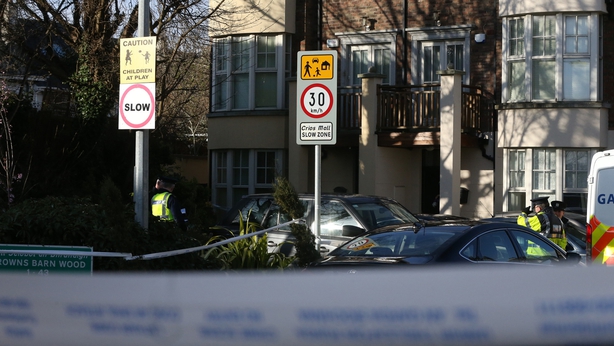 Gardaí do not believe there was any personal relationship between the woman and the victim, and do not know if she knew him.

Medical and psychiatric assistance is being made available to the mother-of-three in custody.

Gardaí in Clondalkin are appealing for anyone who was in the area between 6am and 7am, anyone with dashcam footage or anyone with any information to contact them.

They say they are following a definite line of inquiry and not looking for anyone else at present in what they describe as a "highly unusual" murder.