Three Irish soldiers killed in a roadside bomb blast were "deliberately targeted" in a revenge attack over the abduction of a Lebanese explosives expert, newly declassified State papers have revealed.

The claim emerged after the three men died in a roadside bomb blast in Lebanon in 1989.

The chief of staff at the Department of Defence was sent to Lebanon after the attack to liaise with United Nations authorities in their investigations.

The incident happened when the truck they were travelling in hit a mine near Braashit in south Lebanon on 21 March 1989.

In a government note, it stated that the early investigations by the UN were not complete and it had not been possible to establish who was responsible for placing the explosive device or who it was directed at.

The report from the chief of staff stated the "most plausible" explanation was that the three Irish soldiers were deliberately targeted as an act of revenge by supporters of a known Lebanese explosives expert who had been abducted by the Israelis the previous year from within the Irish battalion area.

Extra security measures were brought in after the attack, including a specialist search team trained in mine discovery.

Weeks before their killing, Private Michael McNeela was killed by a round of heavy machine-gun fire by the South Lebanon Army (SLA) as he manned a checkpoint in the southern end of the country.

An Irish government minister spoke to the Israeli Charge D'Affaires and told him that the SLA was armed, financed and trained by Israel, and that this incident was "bound to have a negative effect" on Israeli-Irish relations.

The Under Secretary of the United Nations spoke to the Israeli Charge D'Affaires in New York to lodge a complaint about the killing. 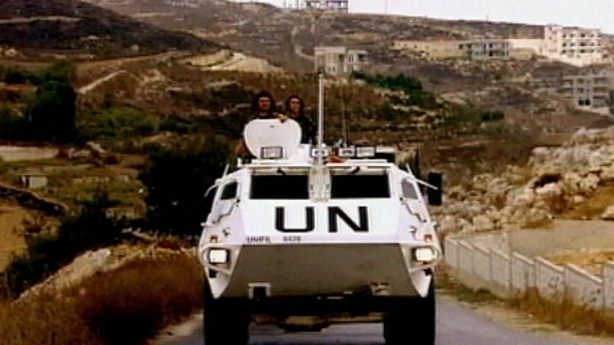 The Israelis told the Irish government that following an investigation, a member of the South Lebanon Army had been jailed and that the unit had been removed from there.

The government said it was "deeply concerned" and "determined" that everything possible will be done to minimise future risks for members of UNIFIL.

"SLA in South Lebanon is illegal and that we held Israel responsible for the action of the SLA and we expected them to exercise effective control over the SLA," the government said.

The Minister of Defence in Lebanon, Adel Osseyran, wrote to his Irish counterpart Michael Noonan to express his "profound sadness".

In a letter dated 23 March 1989, he said: "I wish to express my profound sadness and strongest condemnation of the aggressive act which resulted in the death of three Irish UNIFIL soldiers in Lebanon.

"Whilst offering my sincerest condolences to you and the Irish people, I would like, at the same time, to affirm the deepest attachment of the Lebanese to these forces.

"We highly appreciate their presence on our soil, their efforts and the sacrifices they make."