Homeowners promised a multi-million euro redress scheme to fix defective building blocks say they are "disappointed" the scheme remains closed a full year after it was approved by the Government.

The Mica Action Group (MAG) say the are tired of "rhetoric" from the Government, who wrote to them as recently as last week saying the scheme would be open soon.

MAG spokesperson Eileen Doherty told RTÉ's This Week programme that the group was "disappointed" the scheme had remained closed, while the Department of Housing and Donegal County Council continue discussions around how it will operate.

She said there were in excess of 5,000 affected homeowners, most of whom are located in Donegal.

She said they cannot wait much longer for financial aid; and that the price for waiting to open the scheme would be further deterioration in the homes and a greater cost to the taxpayer and homeowners to fix them.

Mica was contained in bricks sold for many years; but it is entirely unsuitable for construction blocks. The homeowners were promised by Government last October that they could avail of a redress scheme, after exhausting other legal and insurance options.

MAG say a conservative estimate of the total cost to fix all homes affected is in the region of €800m. The group was disappointed that they received just €20m more in the Budget for 2020, which will be added to a similar sum allocated for 2019, but which went unspent as the scheme remains unopened for applications.

She said the total €40m falls far short of what is needed.

Homeowner Christina Crumlish, who lives in a Mica-affected home (below) at Sheskin near Donegal’s Malin Head, said that the longer it takes for the scheme to open, the worse the homes are getting. Major cracks that emerged in the exterior leaf of her home a decade ago have now spread indoors. 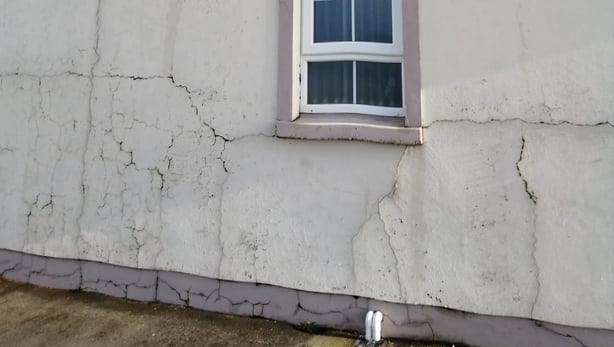 Letterkenny-based engineer Damien McKay, who was appointed to train a panel of engineers to asses the homes as part of the long-awaited scheme, told RTÉ that a further delay would add to the costs.

The Department of Housing and Donegal County Council said they are continuing to discuss details of the scheme and are working on getting it up and running.

No details about how the scheme will operate have been formally published, but Ms Doherty told RTÉ that the Department told them in a recent oral briefing that homeowners would have to pay at least 10% of the costs, and no alternative accommodation or warehousing costs were to be covered via the scheme.

This, she said, would exclude many who could not afford to pay for somewhere else to live and also pay their mortgage for up to 12 months.