Phil Hogan has been confirmed as the EU's next trade commissioner.

The nomination of Mr Hogan, 59, means he will be the EU's chief trade negotiator if and when free-trade negotiations commence between the EU and the UK after Brexit.

In announcing the appointment, the next head of the EU's executive, Ursula von der Leyen, said Mr Hogan was "an excellent and fair negotiator" and had done a "brilliant" job heading agriculture affairs in the outgoing commission.

"It is very important to have together a very good free trade agreement," Ms Von der Leyen told a news conference to unveil her team for the next commission, which must still be approved by the European Parliament.

Mr Hogan's appointment is arguably a powerful signal that the EU will continue to prioritise the issue of the Irish land border if and when those negotiations get under way.

However, there are other major trade negotiations in the pipeline, which means Mr Hogan will have a full agenda.

The EU is keen to champion the rules-based global trading system currently under attack from the Trump administration, and vulnerable to the escalating trade war between the US and China.

Mr Hogan's team will emphasise his role as agriculture commissioner in helping to conclude both the EU-Japan deal and the EU-Mercosur agreement.

The latter has been heavily criticised by Irish farm organisations because it paves the way for an increase in South American beef exports into the EU.

The appointment is a significant achievement for Taoiseach Leo Varadkar, who had lobbied for Ireland to be given a key economic portfolio in the new European Commission.

Ursula von der Leyen introduces Phil Hogan as EU Trade Commissioner: "He is known as a hard and fair negotiator"

In a statement congratulating Mr Hogan, Mr Varadkar said: "Ireland sought a major economic brief in the new European Commission, and I am very satisfied that we have secured it.

"Commissioner Hogan will of course work for Europe as a whole, but it is a definite advantage to have an Irish person in charge of this crucial brief over the next five years.

"He will take the lead on the EU's post-Brexit trade deal with the UK, as well as Mercosur and the EU's trading relations with India, the US and China.

Phil Hogan's appointment as EU Trade Commissioner is a very positive development for Ireland. We sought a major economic brief in the new European Commission, and I am very satisfied that we have secured it.

"He is widely respected in Brussels and across the EU as a skilled negotiator and someone who builds alliances.

"He has proven to be vociferous on Brexit, and I am sure that this will continue in his new role.

"We look forward to working closely with the new Commission President, Ursula von der Leyen, who has already shown a deep understanding of the negative impact Brexit could have on Ireland and across the EU."

Today I am grateful to present my well-balanced, agile and modern Commission that is led with determination, clearly focused on the issues at hand and provides answers. #EUstrivesformore pic.twitter.com/cF7SBxfhtp

Mr Hogan said he is "very pleased to have been nominated" for what is "undoubtedly one of the most important economic portfolios in the College of Commissioners and the appointment comes at a very important time for the European Union and for Ireland".

Speaking on RTÉ's Today with Sean O'Rourke, Mr Hogan said the EU faces many challenges over the coming years with the US, China, reforming of the WTO and reaching a free trade agreement with the UK.

He said he looks forward to meeting British Prime Minister Boris Johnson in due course.

Mr Hogan said trade is two-way and everyone must be happy with the end result. He estimated that it would take at least six to eight months before a mandate for the negotiations would be received from member states.

He added that if Mr Johnson was to make changes to his existing policy and come closer to the deal agreed with former British prime minister Theresa May, then a deal could be reached by 31 October.

However, he said, whether this would be enough to get it through the House of Commons remains to be seen.

Mr Hogan also said the EU would seek to convince US President Donald Trump to see "the error of his ways" and abandon some of his reckless trade policies.

"Mr Trump certainly has indicated his clear preference for trade wars rather than trade agreements. If he keeps up this particular dynamic of protectionism, I expect that the European Union will continue to forge deals around the world," Mr Hogan said.

"But obviously we are going to do everything we possibly can to get Mr Trump to see the error of his ways and hopefully that he will be able to abandon some of the reckless behaviour that we have seen from him in relation to his relationship with China and describing the European Union as a security risk."

Meanwhile, Denmark's Margrethe Vestager has been named as competition chief, retaining the role she has held for the last five years in which she has clashed repeatedly with US tech giants.

Ms Vestager gets a beefed-up remit as vice-president charged with building "a Europe fit for the digital age".

The new European Commission will boost its fight against climate change by making it a top portfolio to be handled by Frans Timmermans.

Minister for European Affairs Helen McEntee said having an Irish person as trade commissioner would "mean that our interests will be represented in any trade talks with some of our largest trading partners". 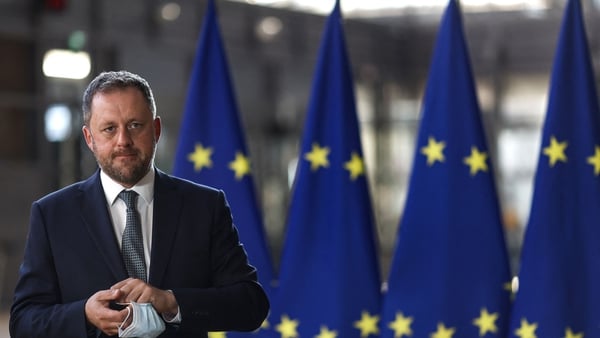