The United States wants the terms of Britain's exit from the EU to protect stability on the island of Ireland and respect the Good Friday Agreement, US Vice President Mike Pence has said.

Mr Pence arrived in Shannon Airport shortly after 4pm today for a two-day visit in which he will meet the President and the Taoiseach, and also connect with his ancestral roots in Co Clare.

Mr Pence was greeted at Shannon by the Minister for Foreign Affairs Simon Coveney and the Mayor of Clare Cllr Cathal Crowe. 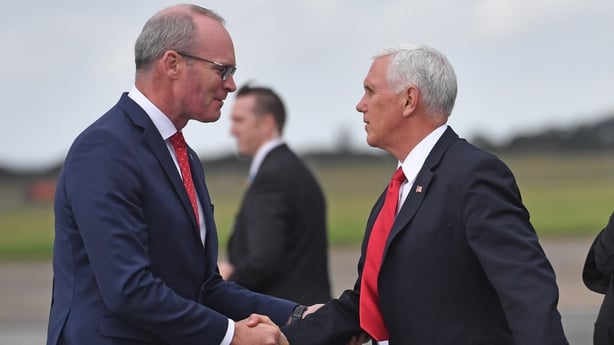 They had a brief meeting in Shannon Airport before Mr Pence's party travels to Doonbeg, where he will stay overnight at the Trump international golf resort.

Speaking to reporters in Shannon, Mr Pence said: "We will continue to work closely with our partners in Ireland and the United Kingdom to support a Brexit plan that encourages stability and also one that keeps the strong foundation forged by the Good Friday Agreement."

He said he was delighted and privileged to be back on the Emerald Isle, the land of his Grandfather. Referring to it as the old country, he described it as a land for which he had the greatest of warmth and regard.

US VP Mike Pence says he's privileged to be back in the Emerald Isle pic.twitter.com/MhOod6JZeC

Mr Pence also expressed his appreciation for what he described as the security partnership that exists between Ireland and the US, referencing Shannon which he described as an important hub for US forces which was especially meaningful, adding that he looks forward to further co-operation.

Tomorrow, Mr Pence will fly to Dublin for a series of meetings and will meet President Michael D Higgins in Áras an Uachtarain and later meet Taoiseach Leo Varadkar at Farmleigh House.

He will also hold a meeting with the newly appointed US Ambassador to Ireland Edward Crawford and US and Irish business people.

Mr Pence returns to Doonbeg tomorrow evening and is due to have a private dinner at Morrisseys restaurant in Doonbeg which is owned by a distant cousin, Hugh McNally.

He has family roots in Ireland, his grandfather Michael Cawley emigrated from Co Sligo to Chicago in the early 1920s and his grandmother Mary Maloney's family had historic links with Doonbeg.

There have been a number of statements from campaigners and poets saying his visit is not a cause for celebration.

Clare-based campaigner Ruairi McKiernan, a former member of the Council of State and a founding member of the Uplift organisation which campaigns on a number of issues including support of migrants, said while Mr Pence likes to talk about his migrant roots in Ireland, he is part of a regime in the US which is causing suffering to modern day migrants.

He has also been criticised by Clare poet Sarah Clancy for his opposition to recognising LGBT people and laws protecting them.

It is understood Amnesty International will be protesting at the visit by Mr Pence in Dublin tomorrow.

His Irish visit was originally due to take place on Friday but was brought forward to today, after it was announced that he would visit Poland over the weekend to attend World War II commemorations in place of President Donald Trump.

Mr Trump cancelled his trip to remain in the US to monitor Hurricane Dorian.