The estimated cost to the Exchequer of the National Broadband Plan increased from €1bn to €3bn between December 2015 and April 2018, according to new information about the tendering process from the Department of Communications.

The final figure was crystalised following more than 400 meetings between senior officials with potential bidders regarding the level of market risk they would be prepared to take and the amount of money they would invest.

Under the revised plan, passed by Cabinet today, 1.1 million people will receive high-speed broadband within seven years under a build and operate contract which runs for 35 years.

The total cost to the taxpayer, which is less than half of the cost of the total plan, is capped at €2.97bn - a figure which includes €545m for contingency.

Despite the Government's plan being based on a "most pessimistic" projection, a cost-to-benefit analysis still suggests there will be a "marginally positive" outcome.

In addition, the contract will include significant "clawback" measures to ensure the State will secure any financial windfall should what are described as "extremely conservative" expectations are surpassed.

The Government deciding that developing a completely new national broadband network would have "huge cost" implications, and so opted to use and improve the existing network which it is argued "maximises interconnectibility"; "saves costs" and "lowers risk to the State".

This in turn meant, it is suggested, that the optimal arrangement for the State would be to allow the consortium own the upgraded parts of the network at the end of the contract, as the relevant fibre cables only have a 25-year life span.

The documents also reveal a once-off €100 for a broadband connection, something which officials consider to be a "low price" and will  "encourage uptake".

Officials believe there are significant protections included in the contract, for example, staggered subsidy payments to the successful consortium will only be paid-out by the State when they have achieved "set milestones".

If contracts are finalised, the majority of the State €3bn subsidy would be paid-out in the first ten years of the 25-year contract.

Lawyers from both the State and the consortium will not negotiate to finalise the contract which should be completed "by the autumn" with one official saying "shovels will be in the ground the day after."

Suggestions that a public utility, like the ESB, could provide the entire broadband service were ruled out on the basis that it would have a "higher long-term cost" and could fall foul of European Union state aid rules.

Under the plan, the roll out of broadband must commence "in every county" within two years with 130,000 actually connected, however it will be up to the provider to determine how it happens depending on their commercial analysis.

The roll out of broadband must be completed within seven years.

The contract specifies that as not all homes and businesses can be connected using fibre, as much as 2% will be secure high-speed internet via other technologies like 5G.

It's envisaged there will be support for what are called Broadband Connection Points (BCP) to help business people in remote areas. 300 BCPs are planned - such as seven for Carlow and 23 for Cork. 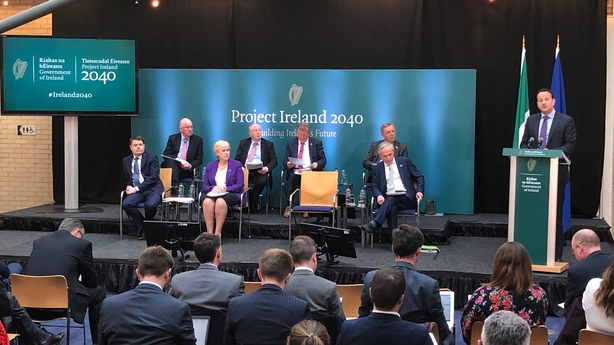 The plan has been robustly backed by Taoiseach Leo Varadkar at a news conference this evening.

He said: "We cannot allow any part of our country to be left behind".

He added that the €3bn figure constituted value for money.

He said costs to the exchequer would be limited to €3bn and the State would only pay out to the consortium after strict targets were achieved.

Mr Bruton contended that all other options would take longer, cost more and deliver a product with lower ambition.

Fianna Fáil's communications spokesperson said today's announcement that the Government is proceeding with the plan was nothing more than a PR exercise two weeks out from local and European elections.

He said if it was more than that we would be talking about the signing of a contract that would show real intent to roll out high speed broadband to rural areas.

Brian Stanley, Sinn Féin's spokesman on communications, said the rising costs of the plan may be explained by the fact there was only one bidder.

He said there are questions that need to be answered about the cost of the project, the duration of the rollout and the conditions in the contract if it were to fail.

Former minister for communications Denis Naughten has said that while the estimated cost has increased from €1bn to €3bn, this allows for overruns on the project.

On RTÉ's Drivetime, Mr Naughten said the likely cost of the plan is €2.1bn.

He said there are clawbacks built into the contract between the State and the consortium which mean that if savings are made the major beneficiary of these would be the State.

Mr Naughten said he is delighted the project is going ahead, adding that whoever made the announcement today is irrelevant.