Speaking at a conference on policing, the Minister for Justice has said the murder of Lyra McKee in Derry is a tragic reminder of the real and persistent security threat from republican paramilitaries.

The conference held at NUI Galway is also being attended by Garda Commissioner, Drew Harris.

The minister said that while Ireland faces threats from international terrorism more than at any time in the past, the reality is that a more traditional security threat remains.

Addressing experts in the fields of human rights, policing oversight and national security, the minister said those who killed Lyra McKee had no thought for the human rights or democratic wishes of the communities they cynically purported to represent.

"Your wish to drag this island back to a dark and bloody past will not succeed because our resolute commitment to peace, democracy and fundamental rights will never be diminished.

"We, like so many others over the past few days, stand with Lyra".

Today's conference will focus on recommendations in the recent report of the Commission on the Future of Policing in Ireland.

Minister Flanagan described the past number of years as difficult for An Garda Síochána as an organisation. He said he regularly meets with gardaí around the country and that there was a real appetite for change within the organisation itself and at grassroots level.

He said the recent report of the Commission on the Future of Policing in Ireland set out what he described as a "very challenging" blueprint for change. 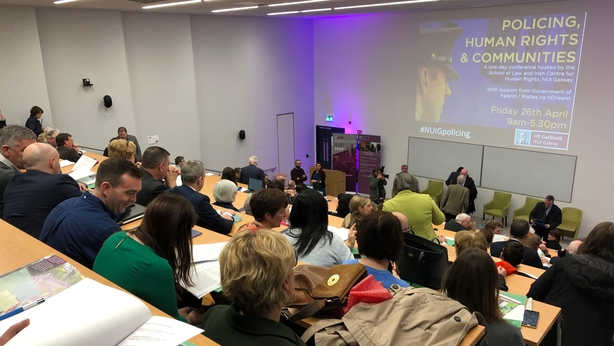 The report acknowledged human rights as the core purpose of policing and was fully supportive of policing with communities.

The minister said that at the same time, Gardaí have powers of arrest, search and detention which may involve interference with the rights of some individuals in certain circumstances.

While lawful, he said these powers had grown up in a piecemeal fashion and new legislation would be prepared to ensure transparency in what he called this "key exercise of coercive power".

In response to the Commission's recommendation, he said his department would support priority projects including the setting up of a Human Rights Unit, developing a Human Rights Strategy and the roll-out of human rights training to all Garda members.

National security was another key focus in the report on the Future of Policing and the conference heard of new structures being put in place including the establishment of a new National Security Analysis Centre and the provision of an Independent Examiner for the oversight of national security powers.

The Commission also recommended that An Garda Síochána move to a local model of policing. Minister Flanagan said that District Policing is the backbone of police work and the police commission.

He said this means in essence, that frontline police and their role in solving problems affecting community safety, reducing crime and preventing harm should be positioned at the core of the organisation.

Following the appearance by minister Flanagan, Garda Commissioner Drew Harris reiterated An Garda Síochána's commitment to delivering an effective and efficient police service that is independent and impartial.

Mr Harris stressed the importance of ensuring that the human rights of each individual engaged during Garda interaction are fully vindicated.

A human rights based approach to policing, Garda Commissioner added, will enable the delivery of a police service that secures the confidence, support and co-operation of all communities.