The chief executive of Sport Ireland has said he believes that John Delaney is still on the Football Association of Ireland’s payroll, despite stepping aside from his current role.

It came after Mr Delaney, Executive Vice President of the FAI, said yesterday he was stepping aside pending the completion of an independent review.

Addressing the Joint Oireachtas Committee on Transport, Tourism and Sport, John Treacy said: "I believe he [John Delaney] is still on the payroll while this investigation by Mazaars is going on."

Mr Treacy also told the committee he understood that Mr Delaney voluntarily offered to step aside from his role and the offer has been accepted.

The committee also heard that Mr Delaney did not receive a severance package when he resigned as Chief Executive of the FAI.

Sinn Féin TD Jonathan O'Brien has called for Mr Delaney to resign and he asked representatives of Sport Ireland if Mr Delaney has signed a new contract of employment in his new position of FAI Executive Vice President.

John Treacy and Kieran Mulvey of Sport Ireland said they do not know if Mr Delaney has signed a contract for his new role.

Mr O'Brien said that he is becoming "increasingly frustrated as we had a situation last Wednesday where an individual who was just two week in the job was actually under more pressure than someone who had previously held a position in the FAI for about 15 years.

"That just shows the level of dysfunctionality within the system. We now have a situation where two board members are gone. A further eight board members have indicated they are going to step down. And the individual at the centre of all the controversy is only stepping aside."

Earlier, the Minister for Transport, Tourism and Sport said that the FAI wrote to him to indicate that the organisation's board will step down.

Speaking at the committee, Shane Ross read out the correspondence he received from FAI President Donal Conway.

"It is the intention that the existing board will step down to allow for a new board to be constituted in the best interests of football," the Transport, Tourism and Sport Committee was told.

It comes as the Taoiseach raised the possibility of the Office of the Director of Corporate Enforcement investigating the FAI.

Responding to a question from Fianna Fáil leader Micheál Martin, Leo Varadkar said that the ODCE may probe the FAI under company law.

Mr Varadkar also said he wanted to see a detailed investigation by Sport Ireland of the affairs of the Association, adding that the Government shared the concerns and "anger" of football fans about how the FAI was run.

Today, the Companies Registration Office received a report from auditors of the FAI, Deloitte, saying that the accounts of the Association are not being properly kept.

Deloitte declared that the FAI is contravening section 281 and 282 of the Companies Act.

Speaking at the committee meeting, Chair of the Joint Oireachtas Committee on Transport, Tourism and Sport, Fergus O'Dowd said that it had come to his notice that "proper books of accounts are not being kept by the FAI".

"A form H4 has been filed with the Companies Registration Office yesterday with effective date 12 April," Mr O'Dowd said.

It is understood that once a H4 form is sent to the CRO, it is then obliged to send a copy of that to the ODCE.

The ODCE has said it does not comment on individual cases.

Meanwhile, when asked if Mr Delaney could retain his place on the board of UEFA, following news that the entire FAI board is to step down, a UEFA press officer said they had no comment to make regarding this topic.

However, it referred RTÉ News to the official page of the UEFA Executive Committee.

This page states that: "Each member of the Executive Committee to be elected by the Congress, except for the President and any female member, shall hold an active office (i.e. president, vice-president, general secretary or chief executive officer) within his Member Association. If this condition is no longer met during his term of office, he shall no longer be eligible for re-election."

Mr Ross described the FAI's appearance at the Oireachtas Committee last week as "shambolic", saying "even the most basic questions, for whatever reasons, went unanswered".

The Minister also said no new capital payments will be made to the FAI "until we receive credible answers".

The committee was also told by the Minister that yesterday's announcement that Mr Delaney had voluntarily stepped aside pending an independent investigation "fell far short of expectations".

The probe is one of a number of investigations into the finances and corporate governance of the FAI.

Yesterday, the association's Honorary Treasurer Eddie Murray and the Honorary Secretary Michael Cody voluntarily resigned from the Board of the FAI.

Sport Ireland and the FAI have agreed to appoint Aidan Horan, a director of the Institute of Public Administration, to head up the new Governance Review Group at the FAI, the Chief Executive of Sport Ireland has said.

Mr Treacy also told the Oireachtas Committee that Sport Ireland agreed with the FAI last night that a full audit of the organisation will take place.

He said: "Sport Ireland has accepted the FAI's offer of engaging with the FAI on the composition of their new Governance review group (to include a majority of external members) and to assist in identifying its external chairperson.

"Sport Ireland has identified a potential candidate Aidan Horan, a director of the Institute of Public Administration and that has been agreed with the FAI."

Sport Ireland has suspended funding to the FAI as it did not notify it of the €100,000 bridging loan given by Mr Delaney to the organisation in 2017.

Mr Treacy said that the FAI breached the terms and conditions for grant approval.

He said that 50% of the Youth Field Sport funding, which amounts to €1.3m, has already been paid to the FAI in 2019. The next payment to the FAI would be due in the third quarter of 2019.

Sport Ireland say the interim period before the next payment should be used by the FAI to take whatever actions are required to enable Sport Ireland to restore funding.

The FAI was insolvent in 2017 when it received a €100,000 bridging loan from Mr Delaney, it has been claimed at the Oireachtas Committee.

Independent Senator Pádraig Ó Céidigh questioned how the FAI - with an annual turnover of €50m - was so "strapped for cash" in 2017 that Mr Delaney had to give it a loan.

He asked: "What happened if Mr Delaney didn't have the money? Didn't have €100,000 to write a cheque? The FAI are insolvent, absolutely insolvent. That is the FAI gone."

Committee chair Fergus O'Dowd said the Office of Director of Corporate Enforcement needs to seize control of the investigation into the FAI.

He said there needs to be reform of the way the Oireachtas Committee system operates.

"The ultimate issue for me here is that we need to reform the committee system. We need to have more powers, we need to look at possibility having another referendum. The powers and capacities of us as committees to compel witnesses to come in or to compel them to answer questions has to be changed.

"I think that is what the public want. But we must frame that in a way that gives fair play to all of those witnesses whoever they might be, and give them due process," he added.

The Oireachtas Committee concluded this evening. 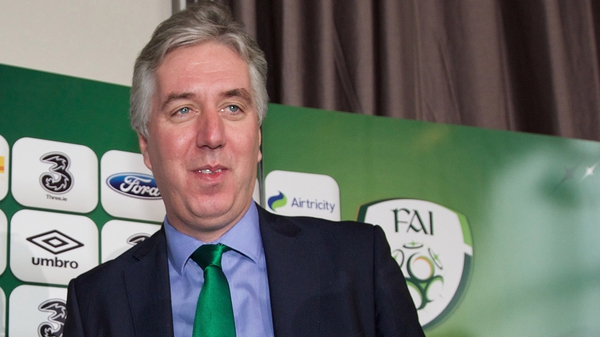