The Economic and Social Research Institute says the economic impact of Brexit on Ireland will be considerable in either a deal or no-deal scenario, with a cost to output this year of between €1.8bn and €7.5bn.

It says the economic shock of Brexit will have negative effects for Irish households, businesses, jobs and government finances.

The latest ESRI assessment of Brexit’s impact on the Irish economy looks at three scenarios - a deal, a no deal and a disorderly no deal.

Ten years after Brexit, the study says output in the economy would be 2.6%, 4.8% or 5% lower than if Britain had stayed in the EU.

In today’s money terms, that would mean a Brexit cost to the economy of between €8bn and €15bn.

The €15bn is roughly the cost of building seven National Children’s Hospitals, or three Metrolink lines - and that is just the 2028 hit to the economy.

Over a ten-year period, the Brexit bill adds up to around €50bn in a deal scenario, and an estimated €100bn in a disorderly no deal. For comparison, bailing out the banks cost €64bn.

As well as slowing down the rate of growth, Brexit will also mean fewer jobs in the economy compared with a scenario in which the UK stays in the EU.

The ESRI estimates that ten years after the UK leaves with a deal, employment in Ireland will be some 45,000 lower than it would have been if the UK remained a member state.

A disorderly no-deal Brexit would see that number almost double, with around 80,000 fewer in employment. 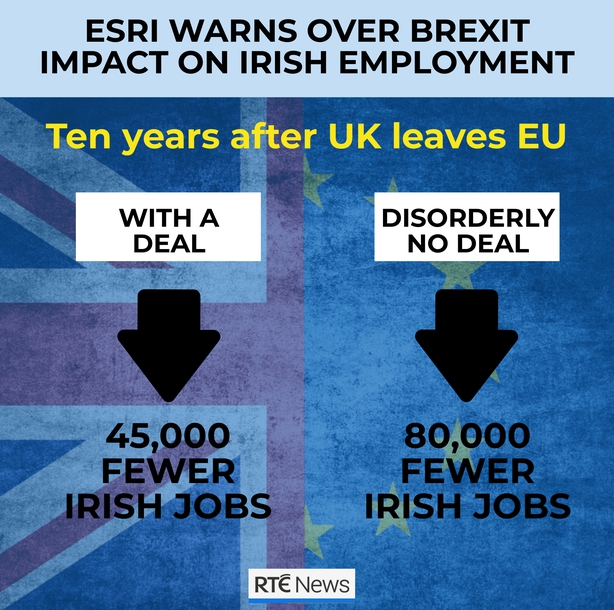 In broad terms, a disorderly no-deal Brexit is twice as harmful to the Irish economy as a UK exit with a deal.

In the short run, sterling is assumed to depreciate against the euro by around 3.5% in the deal scenario, 5.5% in the no-deal and 7.5% in the disorderly no-deal scenario.

In the long run (ten years), both types of no-deal scenarios are assumed to see sterling around 7% lower against the euro, while in a deal scenario, the rate remains about 3% lower.

This is assumed to lead to higher import prices for consumers, with a Brexit deal adding 0.5% to prices and a no-deal Brexit pushing prices up by 0.9%.

A loss in competitiveness of Irish exports would, say the ESRI, lead to pressure for some adjustment of prices in the economy, notably there would be downward pressure on wages, with real wages further eroded by higher import prices.

Overall, the ESRI says Brexit will act as a drag on growth in the Irish economy.

If the long run average growth here in a scenario where the UK stays a part of the EU is assumed to be 3%, a Brexit with a deal will reduce this by 0.3%, while a no-deal Brexit will reduce growth by 0.6%.

In other words, the economy’s long run average growth rate would be 2.4% instead of 3% - a reduction in the annual growth rate of about one fifth.

Because of this there is, unusually, more uncertainty around the short-term impact of Brexit, as it depends on how smooth any transition to new trading arrangements will be.

The ESRI’s estimates of the short run impact of Brexit suggest that by next year, the impact of a deal scenario will be to reduce economic growth by 0.6% - or €1.8bn (again, roughly the cost of the National Children's Hospital).

In a no-deal scenario, EU-UK trade flow is assumed to reduce by 44% relative to the baseline assumption (of the UK staying in the EU). This impact is front loaded, with about half of the hit happening in the first year, building up to 44% over ten years. 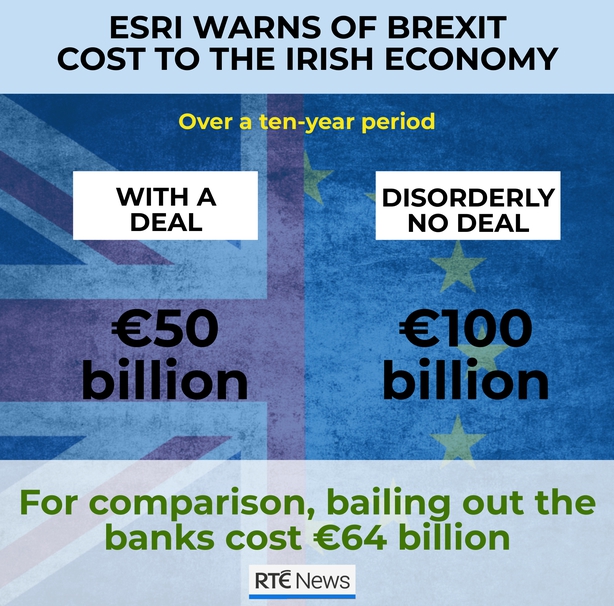 In a disorderly no-deal scenario, additional trade disruption is assumed for the first year, which is captured in this estimate by increasing the estimated impact of non-tariff barriers by a factor of three until the end of this year. After this the disruption reverts to the no-deal model.

Thereafter the adjustment is gradual, reaching 24% below the baseline of the UK staying in the EU after ten years.

In all the scenarios, the figures are adjusted to take account of a probable increase in Foreign Direct Investment diverting from the UK into Ireland.

The ESRI estimates this gain at around €26bn, which would increase the stock of Irish FDI by 3.3% in a no-deal scenario (starting this year), and 2.7% in a deal scenario (in which case the FDI inflow starts after the transition period ends).

There may be some Stormy days ahead for Donald Trump