A final decision on the National Broadband Plan is expected within weeks after a review found that the procurement process was not influenced by former minister Denis Naughten or businessman David McCourt.

The review by an independent assessor, auditor Peter Smyth, was delivered to the Government last week.

It examines whether contacts between Mr Naughten and Mr McCourt - who is leading the only consortium left bidding for the contract - undermined the plan.

The review was requested by Taoiseach Leo Varadkar after it emerged that Mr Naughten met Mr McCourt a number of times, including one meeting at Mr McCourt's home in Co Clare that was not minuted.

It found that: "The fact that the former minister met Mr McCourt or representatives of the other bidders outside the process is not in and of itself a basis for the finding that the procurement process has been tainted.

Mr Smyth said that he was "satisfied that neither the former minister nor Mr McCourt had the opportunity to influence the conduct of the tender process in favour of Granahan McCourt or otherwise.

"I also believe that the decision of the former minister to resign, thereby removing himself from the process insulates the process from any apparent bias created by his engagements with Mr McCourt."

Mr Smyth says the absence of formal minutes or meeting notes for a number of encounters meant he was reliant on statements from Mr Naughten and Mr McCourt and others for verifying the contents of the meetings.

"I cannot unequivocally state that State-led intervention under the NBP was not discussed at the meetings between the former minister and Mr McCourt outside the procurement process."

The report found that the communications protocol for the procurement process "does not expressly prohibit engagements between the bidders (or individual members of a bidding consortium) and the Department of Communications.

"Any such prohibition would have been impracticable in the context of the department's ongoing work outside of the procurement process.

"The requirement set out in the protocol is that engagements related to the procurement process for State-led intervention under the NBP themselves were subject to the protocol.

"Therefore, the fact that the former minister met with Mr McCourt (or representatives of the other bidders) outside of the process is not in and of itself a basis for finding that the procurement process has been tainted."

Former minister Denis Naughten has said the review confirms what he said himself at the time of his resignation.

He said he had not breached any aspect of the protocol by meeting Mr McCourt and had not influenced the tender process in any way.

In a statement this evening, Mr Naughten appealed to Dáil deputies not to make the matter a political issue for their own ends.

The Minister for Communications said he believes the process to issue a tender for the NBP can withstand any potential future legal challenge.

He said the assessment of the Granahan McCourt bid is continuing and issues such as value for money and governance have to be considered.

Mr Bruton said he hopes to bring that assessment to Government within weeks.

On reports the plan could cost up to €3 billion, Mr Bruton said: "until this process is over and we have made a decision on a tender there is no question of considering alternatives."

Earlier, Mr Bruton told a news conference following the publication of the review that the decision of his predecessor, Denis Naughten, to resign was the correct one.

Mr Bruton said report author, Peter Smyth, was clear that "having side meetings in a tender process that haven't been minuted ... could give rise to concern that there was a separate engagement between one of the bidders and the minister".

Taoiseach Leo Varadkar welcomed the report and said he expects a final decision on the remaining tender, which is being evaluated, within the coming weeks. 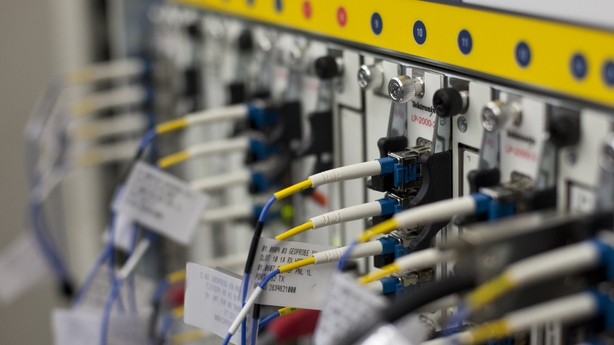 During Leaders' Questions in the Dáil, Fianna Fáil leader Micheál Martin said that over half a million homes and businesses are still without broadband.

He pointed out the original NBP was approved in 2012, it is now heading towards December 2018, and the process has moved at "a snail's pace" and the procurement process has been "mired in controversy".

Mr Martin said there was an extraordinarily high "level of connectivity" between Granahan McCourt and former minister Naughten.

"It is a level of engagement that is without precedent in terms of a bidding process," he said.

Responding, Mr Varadkar said: "I am satisfied that neither the former minister nor Mr McCourt had the opportunity to influence the conduct of the tender process in favour of Granahan McCourt or otherwise.

"I also believe that the decision of the former minister to resign, thereby removing himself from the process insulates the process from any apparent bias created by his engagements with Mr McCourt."

The Taoiseach said the consortium has changed in its composition but it is not a new consortium.

National Broadband Ireland - the only remaining consortium bidding for the NBP contract - has welcomed the findings of the Smyth report.

It said the report also confirms that any engagements with the Department of Communications "have always been in the sincere interest of supporting investment in rural Ireland which the National Broadband Plan represents".

The consortium said it has been committed to the NBP since the first days of consultation and remains committed to a successful conclusion "to bring world-class connectivity to transform the lives of over a million people in rural Ireland."

The Dáil will debate the findings of the Smyth report next Tuesday.

The debate will last for an hour and include questions to Minister Bruton.