A number of events have taken place around the country and in Northern Ireland to mark the centenary of the ending of World War I.

In Cork city, Lord Mayor of Cork Cllr Mick Finn laid a wreath at the Cenotaph on the Grand Parade.

He was joined by relatives of those who died in WWI and members of the Cork branch of the Western Front Association, who also laid wreaths at the monument.

The monument was erected by public subscription and unveiled on St Patrick's Day in 1925.

At St Francis Church, the Royal British Legion Cork branch remembrance service was followed by a march to the Cenotaph..

A civic ceremony led by @mickfinn01 is due to get underway shortly at the Cenotaph on #Cork’s South Mall to mark #Armistice100 - It is among a number of commemorative events in the city & county today. @rtenews pic.twitter.com/kD2Pc5D2C1

At the cathedral, the four years of the Great War were marked as the bell rung once on each of the four minutes leading up to 11am.

A two-minute silence was then observed before the service, during which all 400 names on the cathedral’s WWI memorial wall were read out.

A commemorative service took place, where students from the diocese presented 4,200 handwritten facsimile telegrams as an act of remembrance.

Students laying 4,200 handwritten ‘telegrams’ at memorial wall @SFB_Cork -
each one bearing the name of a Cork man  https://t.co/P42t79VnPu

Each 'telegram' will bear the name and address of a Corkman who died during the war.

As there is no one monument in the county with all the names on it, the Bishop of Cork, Cloyne and Ross, Dr Paul Colton said he had the idea of a writing 'telegrams', the means by which so many received the news the loss of their loved ones.

In Cobh - which was formerly named Queenstown - where the US Atlantic fleet was based from 1917, the largest bell of St Colman's Cathedral solemnly tolled 11 times at 11am to commemorate the 100th anniversary of the guns of World War I falling silent in 1918.

It was followed by a recital by carillonneur Adrian Gebruers on the 49-carillon, who performed Handel's The Dead March, and Chopin's Funeral March in memory of the people who died in 'the Great War'.

The 1,198 people who died on the Lusitania in 1915 after it was sunk by a German U-boat off the Old Head of Kinsale in 1915, and the local sailors who died in the Battle of Jutland in 1916, were also remembered.

Following a memorial mass in the cathedral, an Armistice Day centenary brass plaque was unveiled in the gardens of St Benedict's Prior, formerly Admiralty House, headquarters to the US Navy in WWI. Over 9,000 US sailors were stationed in and around Cork harbour by the end of 1917. 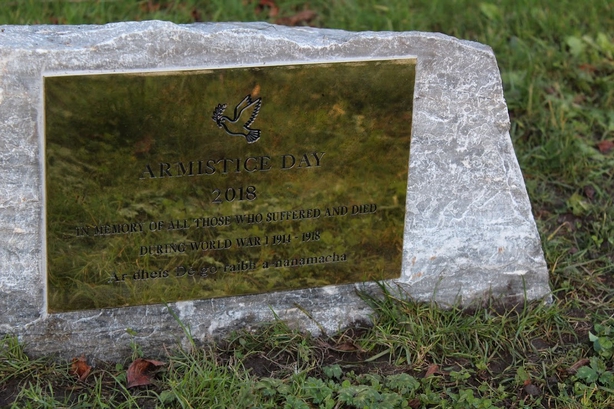 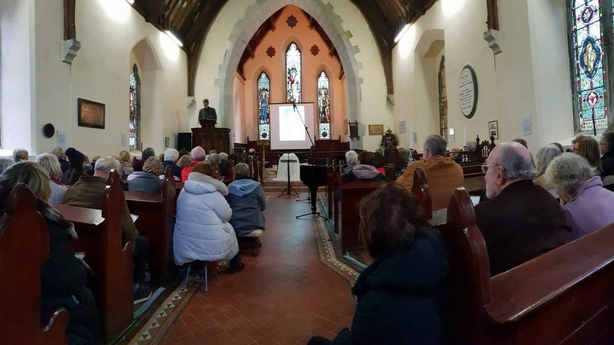 A crowd turned out for a special event at St John the Baptist Church, Valentia Island, Co Kerry, which included a performance by Gavan Ring, a baritone from Caherciveen, to mark Armistice Day on the island.

In Kilkenny city a number of events took place to mark the armistice.

The first began with a service of Remembrance at St Canice’s Cathedral, where 35,000 poppies, commemorating the Irish men and women who died in WWI, were laid from the alter down the central aisle. 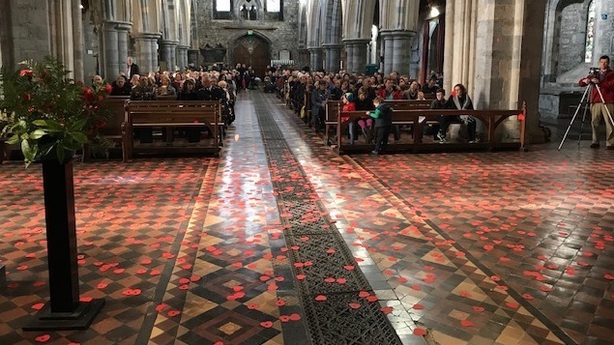 A candle lighting ceremony took place at the Kilkenny Memorial Wall, which contains the names of local men who died in WWI.

The leader of the Catholic Church in Ireland has said the Irish soldiers who died in WWI have bequeathed the modern generation a shared responsibility for healing the past and building lasting trust and peace.

Archbishop Eamon Martin was speaking at an Armstice Commemoration in St Anne's Cathedral in Belfast, the first time a Catholic Primate has spoken at such an event in the Church of Ireland Cathedral.

"The brave people we are remembering are calling us to recognise their shared suffering by building a better future where difference is accepted and respected," Archbishop Martin said.

The Catholic Primate added: "Peace is not merely ceasefire or the absence of violence and war. Peace is an ongoing work of reconciliation, justice and hope. It means coming out of our own trenches, building bridges not parapets, beating swords in ploughshares and spears into pruning hooks.

"The brave people we are remembering are calling us to recognise their shared suffering by building a better future where difference is accepted and respected," he said.

"Although standing at war memorials, wearing poppies, laying wreaths and the Last Post may not have been part of my tradition or upbringing, to remember the dead, to honour and pray for them - especially during the month of November - is important to the practice of my faith," said the archbishop.

"In recent years I have grown to understand more fully that, whilst we may remember in different ways, and whilst our forebears had differing and often conflicting approaches to the war, what unites us now in their memory is so much greater than anything that is talked up to divide us."

Meanwhile in Sligo, church bells rang out at 11.11am, and two minutes' of silence were observed by hundreds of local people who lined up to walk in memory of those from the county who lost their lives in the war.

A procession to commemorate those who died during the war took place in Sligo town; a collaboration between local historian Simone Hickey and the Blue Raincoat Theatre Company. 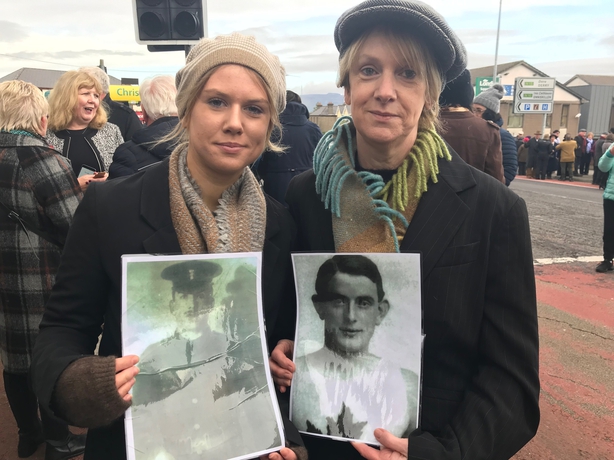 Each person walking represents an individual from Sligo who died between 1914 and 1918.

Ms Hickey estimates that 5,000 Sligo men fought in the war, with 605 of them losing their lives.

A further five Sligo civilians, including two women, died when the R.M.S. Leinster, sank after being hit by torpedoes in the Irish Sea in October 1918.

Ms Hickey represents one of those women, Emily E Barlow who was born in Riverstown in 1876 and who was returning to Cheshire in England after a visit to her family in Ireland. 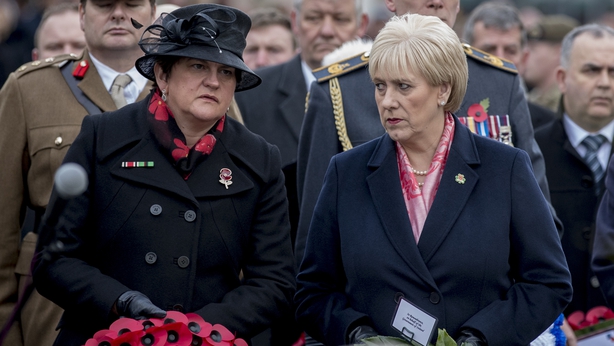 Hundreds gathered in the narrow streets to watch a musical procession including a brass band and bagpipes before representatives of the four main churches in the town led a service.

Remembrance Sunday in the Co Fermanagh town has an added poignancy after a Provisional IRA bomb devastated the event in 1987.

Eleven people were killed in the blast. A 12th victim, Ronnie Hill, slipped into a coma two days afterwards and died 13 years later.

A number of families of the bomb victims were present in Enniskillen for the ceremony.

One of the biggest events in Northern Ireland took place at the cenotaph at Belfast City Hall.

It was attended by Northern Ireland Secretary of State Karen Bradley and Tánaiste and Minister for Foreign Affairs Simon Coveney.

Representatives of all the main churches were present as well as the armed forces and PSN Deputy Chief Constable Stephen Martin.

Ceremonies also took place in Limerick and in Ennis, Co Clare, to remember those who died in WWI.

Wreaths were laid at the war memorial at Pery Square in Limerick city centre by Limerick City and County Council and by a number of veteran organisations. The memorial honours all those who died in the World Wars. 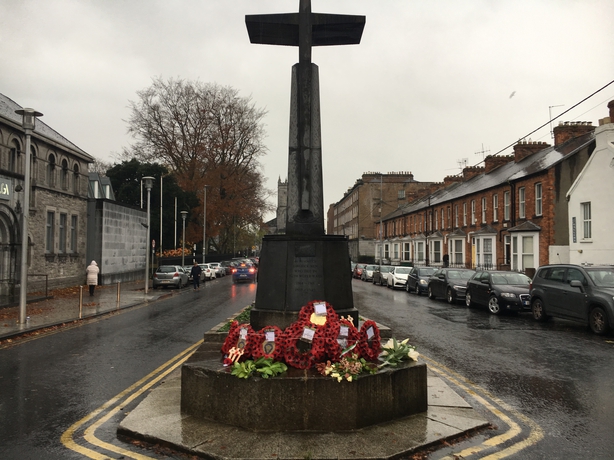 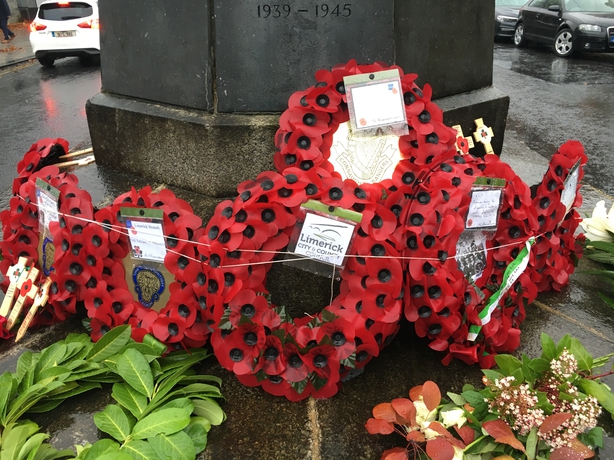 A wreath-laying ceremony also took place at the war memorial at Causeway road in Ennis, which marks the 700 people from Clare who died in the war.

The glass memorial was badly damaged in an act of vandalism in recent weeks, but the community was determined that the ceremony to mark Armistice Day would go ahead in Ennis. 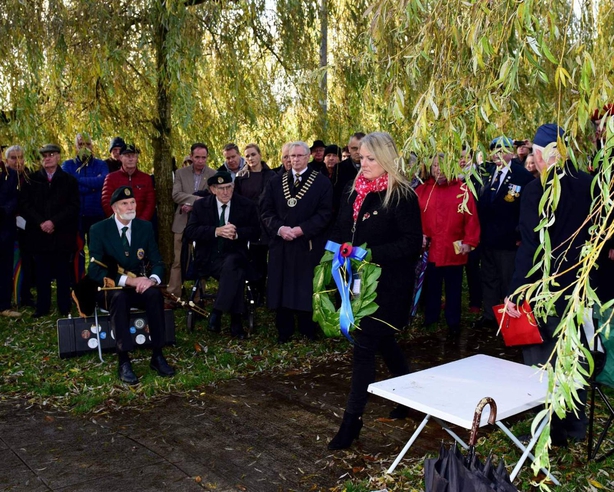