Gardaí have confirmed that a 26-year-old man died when his pick-up truck crashed in Dublin in the early hours of this morning.

The Nissan Navara 4x4 was carrying three people - the dead man, his brother and their mother - when it crashed into a tree and fencing at Fairview Park, north of the city centre, shortly after 1am.

The pick-up truck had come to the attention of gardaí a short time earlier.

It was being driven erratically on the Malahide Road and a patrol unit attempted to pull it over.

The vehicle sped up and was pursued by gardaí before it crashed a short time later.

The driver died in the crash.

His mother, aged in her late 40s, was injured and is being treated in the Mater Hospital.

Her condition is described as critical.

Her 13-year-old son - the dead man's brother - was a back seat passenger.

He received non life-threatening injuries and was taken to Temple Street Children's University Hospital for treatment.

No other vehicles were involved.

It is believed they had travelled from Belfast to Dublin to attend the funeral of prominent Traveller rights campaigner Nan Joyce who died in Dublin earlier this week. 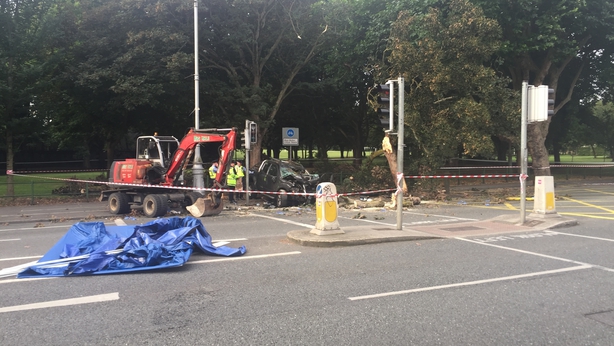 Gardaí said the Garda Síochána Ombudsman Commission had been notified of the incident.

A GSOC spokesperson said the vehicle involved "had come to the attention of gardaí" prior to the crash.