Some Ryanair pilots in Ireland have announced that they are to stage two further 24-hour strikes this month as their dispute with the airline continues.

The Irish Airline Pilots' Association branch of Fórsa announced the strikes will take place on Friday 20 and Tuesday 24 July.

It comes after the airline told its Irish pilots that today's 24-hour strike had got them nowhere, but that if they insist on further strikes, 'then so be it'.

A quarter of Ryanair's Irish-based pilots began the strike early this morning over their conditions of employment after talks between both sides broke down yesterday.

In a statement this evening, the union said that while some common ground was found in yesterday's talks, there was a failure to reach agreement on the terms of reference for a working group to look at the pilots' issues.

Around 100 of Ryanair's directly-employed pilots based in Ireland took to the picket line for the first time in the company's history today.

In a memo to all Irish pilots, Ryanair Chief People Officer Eddie Wilson described yesterday's talks with Fórsa and the Pilots Committee as constructive, but very frustrating.

He said that despite spending seven hours negotiating, the two sides were only in active negotiation for around two-and-a-half hours.

He criticised union demands for frequent adjournments, and alleged that they had failed to put forward clear responses to Ryanair proposals which had been submitted in advance .

He said Ryanair had pointed out that their proposals on command upgrades would only push the company to increase the number of direct entries.

Mr Wilson said the Ryanair negotiators had shown that a European-wide seniority list would actually work against Irish pilots in the case of base closures or downsizing elsewhere - and that hard-to-crew bases would be dumped on the most junior pilots rather than the current system of rotation.

He said the reality was that 80% of Irish based pilots are at the bases where they want to be so base transfers do not concern them unless other pilots elsewhere in Europe are more senior to them.

He alleges: "It is clear that the pilot proposals are designed on advice from competitor pilots whose experience is with small legacy type carriers that have one large base and no growth, whereas the landscape at Ryanair of 87 international bases growing by 50 aircraft per year (doubling the airline over the next five years) is infinitely more complex than these pilots are used to."

Mr Wilson said the airline remains available to resume talks with Fórsa and the Pilots' Committee - and urged the pilots to instruct their union to take up the company's offer of a working group to address their grievances.

Both sides have said they remain available for talks and want to resolve their difficulties.

Fórsa National Secretary Angela Kirk said the union was not in a position to consider calling off today's strike, as both sides could not agreed on the terms of reference.

She said Fórsa and Ryanair pilots went into yesterday's meeting with a strong position that they wanted to "reach agreement and suspend the strike and not disrupt the public".

She went on to say there has been a difficulty since Christmas, in that all the meetings that take place with Ryanair management are "at the eleventh hour", adding that: "management of Ryanair will only meaningfully come to the table when they are faced with strike notice."

She said Fórsa and Ryanair pilots will meet and look at options going forward.

Ms Kirk added that the prospect of further industrial action could not be ruled out while the union remains open to third party intervention.

Ryanair has also warned cabin crew they could be fired if they wrongly exercise discretion not to fly due to alleged fatigue.

In a memo to cabin crew, Ryanair's head of Inflight, Andea Doolan said that in recent weeks, a number of cabin crew have refused to complete their duty "... on the uninformed assumption that they have ‘discretion’".

It is understood the row arose after some cabin crew argued after a long day that they were "out of hours" and that it would be unsafe for them to fly, leading to a flight being unable to depart.

Ms Doolan told the cabin crew that this "behaviour" was unacceptable and could not be tolerated, as it resulted in delayed or cancelled flights, aircraft out of position and unacceptable delays for passengers.

She said that on the rare occasion where there is an issue of operating into discretion, only the commander of the aircraft can exercise that discretion, not the cabin crew - and that instructions from the operations department must be carried out.

She said that as cabin crew operate a fixed roster of 5 days on 3 days off the issue of fatigue arises very rarely, and was not a factor in any of the recent events.

She said Ryanair will not allow passengers' travel plans to be disrupted because a tiny number of cabin crew refused to operate flights, and warned that any such refusals will be dealt with through disciplinary procedures up to and including dismissal.

She acknowledged the hard work and dedication of "frontline" staff confronted daily by delays caused by Air Traffic Control staff shortages and strikes this summer.

However, she said that if a crew member thinks that disrupting flights or cancelling people's holidays is acceptable behaviour, then they are not suited to the industry.

Ryanair subsequently stressed in a tweet that the memo specifically deals with cases of refusal to fly where long hours or fatigue did not arise.

Cabin crew in Spain, Portugal, Italy and Belgium have already flagged that they will strike on 25 and 26 July over their contracts, terms and conditions.

Ryanair has said that it has not been formally notified of any such industrial action. 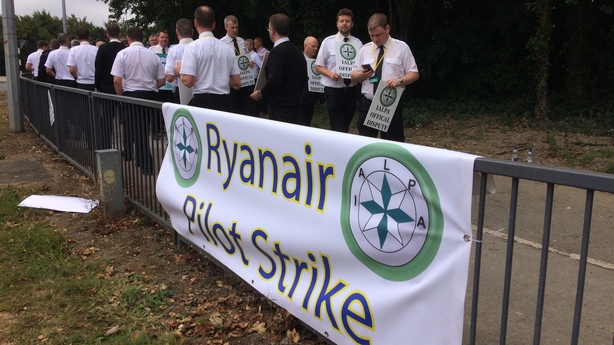