Gardaí said Friday night’s shooting near the National Stadium in Dublin was reckless and indiscriminate and they are treating the incident as attempted murder.

Forensic specialists are examining the scene of the latest Hutch/Kinahan feud gun attack that occurred on the South Circular Road in Dublin.

At around 9.45pm, a gunman got out of a car and started shooting near the National Stadium, causing panic among people attending a boxing tournament.

A 44-year-old convicted armed robber with links to the Hutch gang was chased and shot in the foot.

A second man, a British student in his 20s with no links to criminality, was caught in the crossfire and shot in the wrist.

Gardaí believe two gunmen wearing ski masks were involved. A gunman was seen leaving the scene in a dark-coloured car.

Two cars were later found burned out in north Dublin, a Lexus in Ferndale and a Mercedes in Dunsink in Finglas.

Investigating gardaí are appealing to members of the public who may have any information in relation to this incident or who may have been in the area of South Circular Road, St. Alban’s Road, Dublin 8, between 8-10pm last night.

Gardaí would like to speak to anyone who may have seen a black or dark-coloured Lexus car which was reported to have been in the area at the time.

Any drivers who were in the area with dashcams fitted to their vehicles are also asked to contact Kevin Street Garda Station on 01-666 9400, the Garda Confidential Line on 1800 666 111 or any garda station. 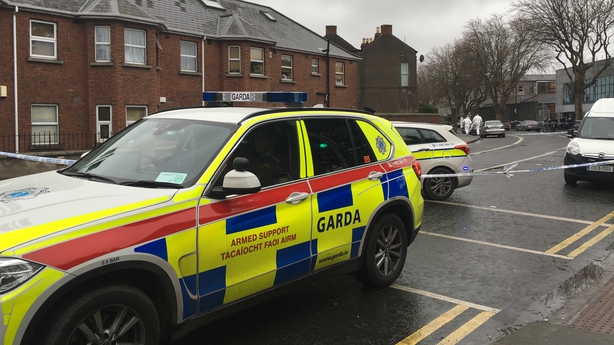 The Irish Boxing Association has strongly condemned the attack which it said has nothing to do with the sport.

The Association's Vice President Joe Hennigan said it was not going to stop the association promoting the boxing tournament and he hoped last night's attack was the end of it.

This is the second shooting in a week in a feud that has so far cost 14 lives.

Last weekend, a 27-year-old man was shot dead in a gun attack in Clondalkin, west Dublin.