Firefighters have been praised for averting loss of life after a fire broke out in a high-rise tower block near Belfast.

The blaze burst through windows of a ninth floor apartment in Coolmoyne House in Dunmurry, causing scorch damage on two sides of the 14-storey property.

The man whose flat caught alight was rescued by fire service personnel who also helped lead other residents to safety.

Northern Ireland Fire and Rescue Service Group Commander Geoff Somerville said the accidental fire, which he said was suspected to have been caused by a toaster, was well developed when crews arrived within five minutes of the emergency call.

"I am very relieved there is no loss of life and that is only because of the courageous actions of our firefighters here today," he said.

"We had 55 firefighters in attendance and thanks to their professionalism no one has lost their life in this premises."

The fire comes a day after the five-month anniversary of the Grenfell high-rise inferno, which killed at least 80 people.

Evacuated residents gathered outside the building as the emergency response unfolded. Some later went to a nearby community centre.

Some expressed concerns that fire alarms did not sound through the building when the blaze took hold.

The fire was reported from the 9th floor of Coolmoyne House in Dunmurry, near Belfast early this evening | Read more https://t.co/4TgVQN5661 pic.twitter.com/tIfqLbhVSV

Mr Somerville said the alarm system operated as designed, with the alarms inside the man's flat sounding and a soundless alarm system in the communal area to open air vents also activating.

He said alarms in other flats should only have sounded if they detected smoke.

"The fire alarm system worked as expected," he said.

Mr Somerville said crews had averted the spread of the fire to other flats.

"It flashed out through the windows of the flat on two different sides of the building," he said.

"When we arrived it was a very well developed fire and I'm glad to say it was very quickly brought under control."

A spokesman for the PSNI said the matter was being dealt with by the fire service. 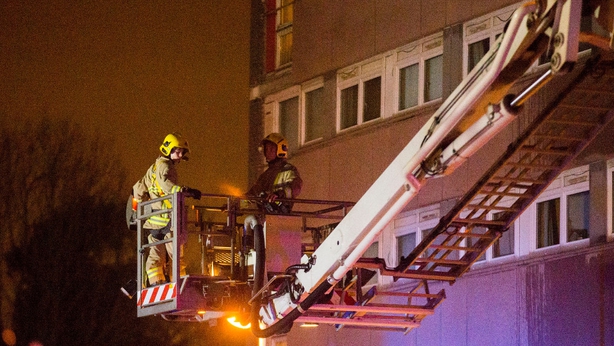 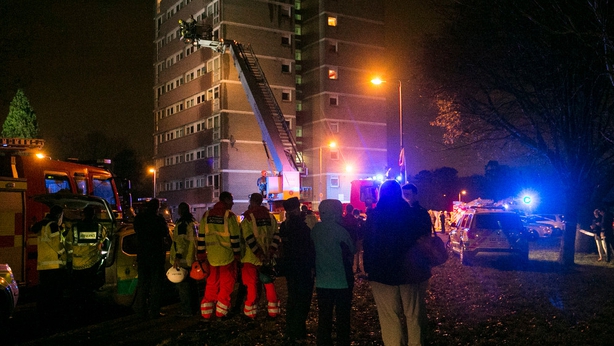 Robert Zwaagman, who lives on the 12th floor, said the first he knew of the fire was when fire crews arrived.

He insisted an alarm should have sounded throughout the building.

"Especially after the Grenfell Tower accident the main question and the main concern of mine is the fact why didn't the alarms go off, with such a big fire, on every floor?" he said.

Mr Zwaagman said it had been a "frightening" experience.

"I am okay now but just a couple of minutes ago I was shaking," he said.

Fellow resident Janice Sloan said: "It's such a shock to have such an event like this.

"The first we knew anything was wrong was the two fire brigades outside."

Footage obtained by Q Radio shows the extent of the blaze at Coolmoyne House, Dunmurry before it was extinguished by NIFRS. pic.twitter.com/Kia80pA6hm