Public Accounts Committee Chairman Seán Fleming has said the Garda Commissioner will be called before it to explain what he described as "a breakdown of all financial controls" at the Garda College in Templemore.

An Garda Síochána has published a report detailing financial irregularities at the college over a number of years.

For the last seven days, the force has been strongly criticised for serious irregularities in road traffic policing; today the focus is on accounting practices at the Garda College.

The Garda's Internal Audit Section examined financial transactions over a number of years at Templemore.

Its report, forwarded to Minister for Justice Frances Fitzgerald and Garda Commissioner Nóirín O'Sullivan, discovered financial irregularities and evidence that money was being spent on gifts and entertainment.

It also identified a large number of bank accounts as part of a non-transparent system of accounting.

One, a laundry account, was not being used for that purpose.

Opposition politicians said again today that the blame for these and other matters lies with the commissioner.

Ms O'Sullivan has already said these are legacy issues, and that while the accounting practices would not be acceptable by today's standards, there was no misappropriation of money or misuse of public funds.

However,  Ms Fitzgerald told the Dáil last night that the report raises serious governance issues and will be referred to the Comptroller and Auditor General and the PAC.

The audit report showed €124,903 was collected in rent for Dromad Farm, land that was bought for a tactical training centre.

The Office of Public works is the legal owner of the land and therefore, the report says, was entitled to the money, some of which was spent on entertainment, presentations, sponsorship and donations to charity. 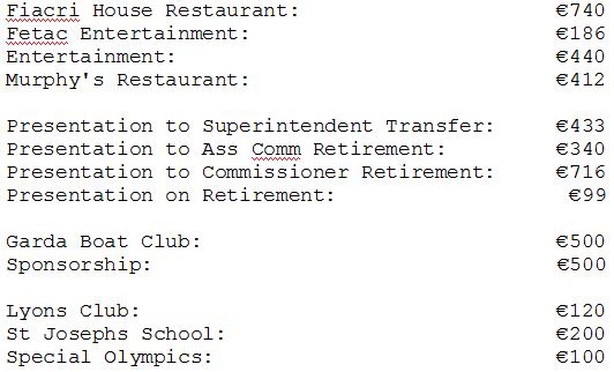 The holding company for the land was operated with Garda College management as directors.

The report says the legal standing of this is questionable.

The audit found 50 bank accounts and said the number and complex switching of funds between them resulted in "a non-transparent system of accounting".

Issues at the college bar, it said, "related to poor management and inadequate stock control rather than suspicion of theft or fraud".

It found €417,068 in the St Raphael (Garda Credit Union) Bar Account which was all transferred to the restaurant account to keep it going when student numbers were low as recruitment stopped.

It found 37% of the Laundry and Services account had nothing to do with laundry or services with money spent on:

It also operated a staff loan facility of up to €500 but these were repaid promptly.

The auditors said they could give no assurance that the financial controls at the Garda College are compliant with public financial procedures or the Garda Finance Code.

They say the issues are serious and present considerable risk to the organisation and should be dealt with in an open and transparent manner.

Garda Headquarters said today it recognises the gravity of the issues raised and accepts that while a number of the report's recommendations have been progressed, the substantive ones need to be addressed in a more proactive way.