A report published today concludes that Irish will no longer be the primary language in any Gaeltacht community in ten years time.

The research, commissioned by State agency Údarás na Gaeltachta, is based on census figures for 2006 and 2011.

The authors conclude that the social use of Irish in the Gaeltacht is declining at an even more rapid rate than predicted in their last report in 2007.

They also conclude that spoken Irish in the Gaeltacht is becoming more confined to the academic setting of the classroom while declining in the community setting.

A dispute between Údarás na Gaeltachta and the authors has delayed publication of the report by over a year.

The Údarás objected to the inclusion in the report of recommendations for preserving the language.

Some elements of the recommendations are highly critical of the State's approach to Irish in the Gaeltacht.

The research shows that of the 155 electoral divisions in the Gaeltacht, only 21 are communities where Irish is spoken on a daily basis by 67% or more of the population. 67% is regarded as a tipping point for language survival.

The report is being published by Údarás na Gaeltachta - minus the recommendations.

A compromise was reached several weeks ago and the authors agreed to publish the recommendations separately.

One of the authors, Professor Conchúr Ó Giollagáin, told Nuacht RTÉ he was not informed by the Údarás that the report was being published today.

He also said he has not been invited by the Údarás to the launch in Donegal.

Údarás Chairperson Anna Ní Ghallachair said that the authors of the report were made aware that it would be published this week and they had been contacted .

She said there was no official launch of the report and that was why the authors were not asked to be in attendance at today's meeting in Donegal, where the report and its findings were discussed

The Irish Language Commissioner, Rónán Ó Domhnaill, has expressed concern at what he describes as the worrying decline of the use of the Irish language in Gaeltacht areas.

Speaking on RTÉ's News at One, Mr Ó Domhnaill said the finding did not come as a surprise to him. He said the reports shows just how difficult it is to keep Irish alive in Gaeltacht areas despite efforts by community members.

Mr Ó Domhnaill said the role of the State in the matter needs to be looked at, including the provision of State services through Irish in Gaeltacht areas.

He said, currently, there is no requirement in the Languages Act, that the state should conduct it's business through Irish, and that this needs to be looked at.

He said the Government has the opportunity to revisit this as they have committed to publishing a revised Languages Act.

He added recommendations such as the one that State employees in Gaeltacht areas should be able to speak Irish should be part of it.

He also said that legislation alone cannot solve the problem, but he said, what is needed, is an environment to be created where the community can feel that the state is supporting them in it's efforts to keep the language alive. 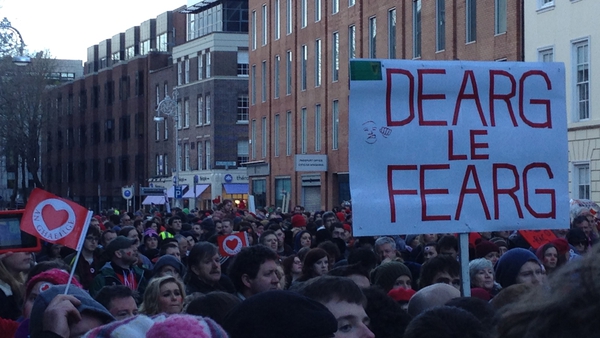