A debate on a Socialist Party Private Members’ Bill calling for abortion services to be introduced here took place in the Dáil tonight.

It was the first time an abortion bill has been debated in Dail Éireann.

Introducing the legislation, Socialist TD Clare Daly said this was the first time a bill was being presented to the House to deal with a situation that has been ignored for too long.

She said she was introducing the bill on behalf of the 150,000 women who have been “exported” from this country to seek abortion services.

Their voices had been sidelined and ignored, the deputy said.

Ms Daly said the bill was simply legislating for the X-case; it could go further, but she said it was just a first step that could be built on.

She said Britain had acted as a safety valve for this country to export the women it didn't want to provide services for, but that was changing now that thousands of women could no longer afford to access services in the UK.

The Minister for Health, James Reilly, said the Government has set up an expert group, which has not yet reported.

But he said that the Government would not be accepting the motion put forward in the Dáil tonight.

"On a technical level, the pressing responsibility is to take action to deal with the ruling of the European Court of Human Rights in the ABC case," Mr Reilly said.

"And the Government has already moved in a direction that can give confidence that the action we take will be well thought out on all the necessary levels.

"You will know that the court ruling places obligations on Ireland and last year (on 16 June) an action plan was submitted by Ireland to the Committee of Ministers of the Council of Europe.

"As part of that plan, Ireland is committed to ensuring the judgment in this case is implemented expeditiously."

Labour's Anne Ferris said that she is a Catholic, but that she had no fear of damnation in doing the right thing by expressing her belief that women have a right to abortion.

Deputy Wallace said it was hard to credit that six successive governments had failed to address the human right of women. He added that the X-case judgment was not a revolutionary judgment at the time.

Fianna Fáil's Billy Kelleher said the complexities of the debate needed to be acknowledged along with the varying views across the State and even in the House.

The law on abortion dated to criminal legislation from 1861 and the debate should be above party politics, Mr Kelleher said.

Sinn Féin leader Gerry Adams said he was personally not in favour of abortion, but said he was against judging or criminalising women who opted for terminations.

He said he had to set aside his personal convictions and face up to his legislative duties.

There will be further debate on the bill in the Dáil tomorrow. 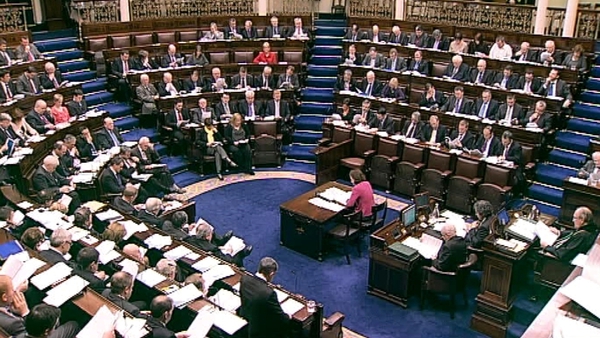 Legislation on abortion introduced in the Dáil