The National Director of the National Cancer Control Programme has said the impact of Covid-19 on referrals for breast, lung and prostate cancer has been significant.

Professor Risteárd Ó'Laoide was speaking at the HSE briefing this afternoon as the effect on cancer services was outlined.

The number of breast cancers diagnosed in April of this year was down by one third compared with the same month last year.

The figures show that number of breast and lung cancer cases detected remained below last year's throughout the period from March to May.

However, the setback to the diagnoses of prostate cancer has lasted significantly longer. 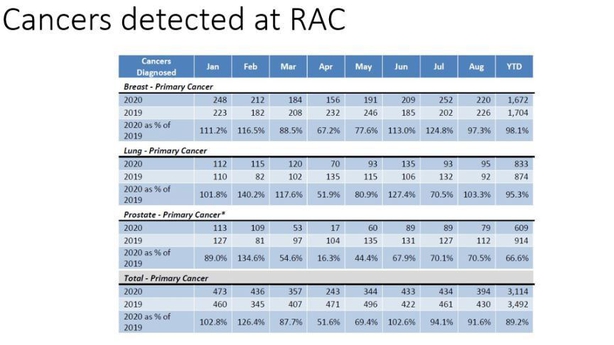 By the end of August the number of prostate cancers diagnosed so far this year was running at just 66% of last year's levels.

Professor O'Laoide said that the upshot is that 371 cancers in those three areas had effectively been lost by the end of August due to the impact of Covid-19.

However, he said that when other types of cancers are added into the mix the total number of what he described as "lost" cancers due to Covid-19 could be as high as 2,000 cases.

Prof Ó Laoide said counterparts in Northern Ireland and the UK are reporting a similar experience.

The Irish Cancer Society said the number of undetected cancers was "a concern" and urged anyone noticing ongoing changes in their health to seek medical advice.

"When it comes to having the best chance of a good outcome, detecting cancer early is vital," a statement from the charity said.

Last month, the national cervical screening programme CervicalCheck said it expects that all women who were due to have a screening test this year will have been invited by March 2021.

Figures show that the pausing of screening, due to Covid-19, resulted in more than 99,000 screening invitations being delayed.

At an Oireachtas Committee in July, the Irish Cancer Society warned there would be excess and avoidable deaths due to the postponement of cancer screening services.