The Scally Review has found "serious gaps" in expertise and governance of the CervicalCheck screening programme.

Presenting his report, Dr Gabriel Scally said the problems uncovered "are redolent of a whole-system failure".

This led to the scoping inquiry having to "delve into the full range of issues that have impinged upon the cervical screening programme and this increased the complexity" of the task.

He said it also placed him in a good position to identify the changes that are needed to renew and strengthen the screening service.

Dr Scally said he found no evidence of conspiracy, corruption or a cover up. He said he believes he got all the documents he needed, but had to get the Minister for Health's help to secure some documents.

Dr Scally said he is satisfied with the quality of management processes in the current laboratories and there is no reason the contracts can not be rolled on.

We need your consent to load this rte-player contentWe use rte-player to manage extra content that can set cookies on your device and collect data about your activity. Please review their details and accept them to load the content.Manage Preferences
The Government has accepted all 50 recommendations in the review into the crisis.

The report was brought before the Cabinet this morning.

The recommendations include establishing a monitoring programme involving women and families affected to ensure Dr Scally's recommendations are implemented in full by the Health Service Executive.

That programme will also publish regular reports on progress.

Some of those affected by the controversy had a five-hour briefing with Dr Scally yesterday on his findings.

The scoping inquiry in the CervicalCheck screening programme was set up to examine the non-disclosure of information to Vicky Phelan and the apparent widespread practice of non-disclosure, and who knew this was happening.

The controversy came to light after Ms Phelan, of Carrigeen, Annacotty, Co Limerick, along with her husband Jim Phelan sued the Health Service Executive and Clinical Pathology Laboratories Inc, Austin, Texas, over a smear test taken under the National Cervical Screening Programme CervicalCheck and analysed in the US laboratory.

She was diagnosed with cancer three years after her smear test results of 2011 were incorrectly reported as clear of abnormalities.

Since then it has emerged than more 200 women with cervical cancer should have received treatment earlier than they did.

'Most doctors involved in disclosure process were male'

The report said that "one key point that surfaced on several occasions was that most of the doctors
involved in the disclosure (or non-disclosure) process were male."

This the reports says this "led the women to develop concerns that the attitudes and lack of openness were accounted for by paternalism in the healthcare system".

The review found that colposcopists "didn't regard themselves as part of CervicalCheck" despite the fact that funding for the for their time in is attributable to CervicalCheck.

One of the recommendations of the report is that the Department of Health should enter into discussions with the Medical Council "so that it is placed beyond doubt that doctors must promote and practice open disclosure".

No accountable senior person responsible for delivery of programme

The report says that since 2010 CervicalCheck has not had a single, accountable senior person responsible for the delivery of the programme on a full-time basis.

At that time, the Head of Cervical Screening retired, but was not replaced.

Instead there was an organistional restructuring with the Programme Manager becoming the administrative and operational head of cervical screening, and clinical leadership coming from the Clinical Director.

The report says the position of Clinical Director, which is currently vacant, was most recently filled on a part-time basis by a Consultant in Obstetrics and Gynaecology based in one of the Dublin maternity hospitals.

The inquiry also found evidence that appropriate procedures were not followed when staff were being appointed to positions in CervicalCheck and the wider National Screening Service.

It also says that in recent years, CervicalCheck has experienced difficulty in attracting and recruiting new staff members.

Staff told the inquiry that as its budget was reduced during the financial crisis, CervicalCheck struggled to adequately replace departing staff.

Another issue highlighted in the report is an absence of regular performance appraisals for staff within CervicalCheck, which the author suggests a lack of effective oversight within the organisation. 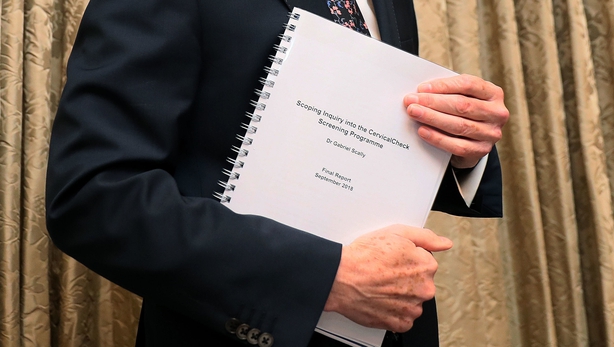 Appreciation 'all was not well' with national screening service

Some of those working within the National Screening Service told the inquiry that screening was downgraded after being absorbed into the HSE and they felt they had little influence within the HSE as a whole.

The report finds that it appears that there was an appreciation at the top of the HSE that "all was not well" with the National Screening Service.

A 2017 report by an external consultancy company commissioned by the HSE Director General found there to be a somewhat negative relationship and clear disconnect between the screening services and the HSE.

That report also identified issues of isolation, suspicion, lack of trust or support and poor or non-existent communication.

The Scally Review says eight recommendations were made by that review, but it did not perceive from the information available to it any visible

Signs of these recommendations being implemented except, arguably, the move of the National Screening Service into the National Cancer Control Programme.

The inquiry found a key weakness in the governance structures within the HSE in relation to CervicalCheck and the National Screening Service around how risks are identified, communicated, and managed.

The report said the decision to abolish an independent board of the HSE in 2012 led to a situation where it is difficult to see who was representing the patient and public interest.

The review says it is apparent to it that there is a serious gap in the arrangements for the proper governance of screening in general.

It says there is a need for an expert body to support the Department of Health in the development of policy on both new and existing screening programmes.

In relation to the knowledge of the Minister for Health about the issues, the Scoping Inquiry says it has not seen any evidence that any issues with regard to CervicalCheck were brought to the attention of Simon Harris prior to April 2018, when the department became aware for the first time that a case was scheduled for hearing on 19 April.

The report recommends that Mr Harris should consider seriously the appointment of two patient advocates to the proposed new Board for the HSE.

It also suggests that a National Screening Committee should be constituted to advise the Department of Health and the minister on all new proposals for screening and revisions to current programmes.

It says the National Screening Service, whatever its location within the HSE, should be able to access senior levels of the organisation and be located close to strategically and logically linked services.

The implementation of new governance arrangements for the HSE should include a substantial revision to the organisational approach to risk management and its reporting, it also recommends.

Some of the experiences cited in the Scally Review: