The midwife manager on St Monica's Ward at Galway University Hospital has confirmed that she told Savita Halappanavar that a termination could not be carried out because Ireland was a "Catholic country".

In a statement, she detailed the care she helped provide on Monday 22 and Tuesday 23 October.

Ms Burke told the coroner she was very upset about the matter and that she did not mean the remark about Ireland in a hurtful context.

She said that with hindsight it "sounded bad" and the remark was something she regretted.

Ms Burke said she was giving Mrs Halappanavar information because she was puzzled.

"She had mentioned the Hindu faith and that in India a termination would be possible," Ms Burke said.

She said the remark had "come out the wrong way and I'm sorry that I said it".

"I was trying to be as broad and explanatory as I could. It was nothing to do with medical care at all," she added.

Dr Ciaran McLoughlin said the remark had gone around the world and he stated public hospitals in Ireland did not follow religious dogma of any persuasion.

The inquest has been adjourned until tomorrow morning.

Earlier, the consultant obstetrician who treated Mrs Halappanavar has told the inquest there was a "systems failure" in the care that was given to her.

Dr Katherine Astbury said Mrs Halappanavar's clinical signs were not checked every four hours after her membranes ruptured, which was a breach of hospital policy.

She told the inquest that when Mrs Halappanavar requested a termination from her on the morning of 23 October, she outlined the legal position to her.

She said that Mrs Halappanavar had told her she was finding it very upsetting and difficult given that the ultimate outcome would be that her baby would not survive.

Dr Astbury told her "in this country it is not legal to terminate a pregnancy on the grounds of poor prognosis for a foetus".

She said it was her view that Mrs Halappanavar was emotionally disturbed, but not physically unwell.

She told Mr Halappanavar's barrister, Eugene Gleeson, that she felt at the time the prospect of viability for the foetus was poor as opposed to being non-existent.

The phrase "inevitable miscarriage" had been recorded in medical notes by a colleague of Dr Astbury on 22 October.

Dr Astbury told Mr Gleeson that "the law in Ireland does not permit termination even if there is no prospect of viability".

She said this was her understanding based on the X Case judgment and Medical Council guidelines.

Dr Astbury told Mr Gleeson it did not occur to her to consult her colleagues about the legal position.

She said Mrs Halappanavar had severe sepsis and her life was in danger on the afternoon of 24 October.

Dr Astbury said she felt she could now carry out a termination, but a scan showed there was no foetal heartbeat.

Mrs Halappanavar was brought to theatre at around 3.15pm and the foetus was delivered naturally.

After deteriorating further, she was moved to the High Dependency Unit.

Questioned this morning as to the content of the conversation she had with Mrs Halappanavar on the morning of 23 October, Dr Astbury said she made no mention of religion.

She said she used the words "in this country" and denied making any reference to Catholicism.

Dr Astbury she did not make a record of the conversation with Mrs Halappanavar regarding her 23 October request for a termination in the patient's medical notes.

When Mr Gleeson put it to her that she may have had other conversations with Mrs Halappanavar or her husband about the issue, Dr Astbury said she did not believe that this was the case.

Dr Astbury said she did not see Mr Halappanavar or his wife on Monday 22 October after a scan detecting a foetal heartbeat was performed and that there was no formal request made to her for a termination on that day.

She said Mr Halappanavar was also mistaken in thinking he spoke to her on Tuesday 23 October.

She said the risk of infection was explained to Mrs Halappanavar after her waters broke in the early hours of 22 October.

A scan was carried out later that morning to ascertain whether a foetal heartbeat was present.

Dr Astbury said she told Mrs Halappanavar that if a heartbeat was detected the only option was to "sit and wait".

Earlier, Dr Astbury said vital signs were checked at four-hour intervals during the day. but that there were longer gaps at night.

When Dr McLoughlin put it to her that this amounted to a systems failure, she agreed.

In addition, blood tests taken on the day of Mrs Halappanavar's admission to hospital on Sunday 21 October had not been followed up.

These tests showed an elevated white cell count, which is one of the criteria that would indicate severe sepsis.

Dr McLoughlin said it was another systems failure that the abnormal blood count had not been communicated to Dr Astbury or her team.

Dr Astbury said if she had this data on Wednesday 24 October she may have considered intervening sooner.

As it happened, there were no blood results available at that time and Dr Astbury said she was working on the basis of clinical signs.

The inquest was told this morning there was no retrospective interference with anything that had been written on her medical notes.

Declan Buckley SC for the hospital said a "squiggle" referred to during the course of yesterday's proceedings was a bracket to provide an emphasis about four entries on the chart.

Mr Buckley said it did not interfere with anything that had been written in the notes.

He said it appeared somebody who was reviewing the chart simply took a pen and marked four entries.

Mr Buckley said the chart in question was copied and put in the hospital safe on 14 November last.

He said the hospital's internal inquiry did not begin until 10 December and so this bracket was not added during that investigation.

Mr Gleeson told the inquest there were a "flurry of retrospective notes" up to 12 November.

He said he is seeking clarification about this. 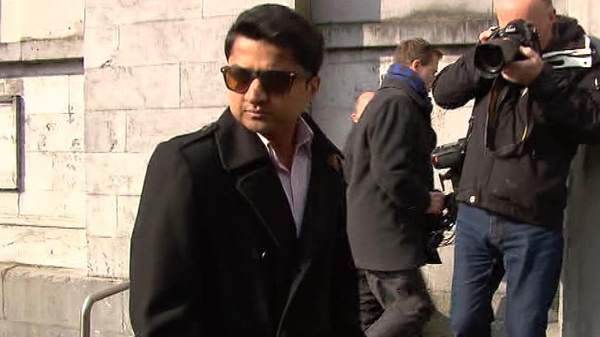