Here are seven key points about what German Chancellor Angela Merkel called an impressive response to a historic recession and the worst crisis in the European Union's history.

The nitty-gritty of what Ireland will receive from the recovery fund has not yet been made public.

Early in the negotiations a draft figure of around €3bn of the €750bn had been discussed, split two thirds in favour of grants and one third in loans.

It is not entirely evident yet to what extent that has changed, but we do know 70% of what’s due will be paid out in 2021/22 with the remaining 30% coming later when it clear which economies are particularly suffering.

But perhaps more important is the €5bn Brexit reserve, which is part of the new EU budget.

Ireland is likely to be the worst impacted country when it comes to Brexit, so it can be expected that we will get access to much of that amount.

Funding to protect the Common Agricultural Policy is also a particularly important element for Ireland.

The increase in funding for the Horizon research fund is also a positive, as Irish researchers and companies have been quite successful in winning money from it in the past. 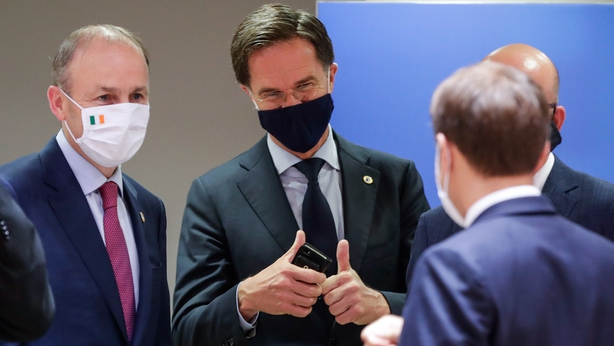 Ireland, as one of the stronger EU states economically, is already a net contributor to the financing of the union.

And it isn't as though we haven’t benefited over the years, with over €40bn received in terms of single market access as well as social, environmental and financial receipts when we were one of the weaker members.

So in the case of the recovery fund it is unlikely to be any different.

But exactly to what extent may not be clear for some time, until variables such as how much of the overall borrowings Ireland has to underwrite and the manner in which the money is allocated are clarified.

Also as the money is being paid back over a 30 year period, it is hard at this remove to calculate what the cost of that will be for each contributor.

However, the Taoiseach has made the point that what is more important is that the fund does its job and lifts the European economy, upon which Ireland is so dependent for exports.

When it comes to the multi-annual framework, or EU budget, the contribution is likely to be around €3.5bn a year.

Once again, how much we get back though won’t be clear for a while, until the minutiae has been worked out.

The €750 billion coronavirus rescue is a package of loans and - more controversially - grants, to help hard-hit countries through the recession triggered by the epidemic.

The sum will be borrowed on the markets by the EU executive, the European Commission, and is thus based on the biggest ever issuance of joint European debt.

This was once taboo for Germany, and was resisted this time by an even more "frugal" coalition of the Netherlands, Austria, Sweden and Finland.

But, despite Dutch leader Mark Rutte and Austria's Sebastian Kurz warning this would amount to forming the dreaded "transfer union" of well-run countries subsidising big spenders, it was approved.

Leaders like France's President Emmanuel Macron who were pressing for more joint debt hailed the move as a historic step forward for the union and for its single currency.

"At base what we are building is a common solidarity, and that's unprecedented as the budgetary function that Europe needs to become a geo-political power," he said.

Mr Rutte, however, stressed the temporary nature of the arrangement, insisting it was a "one off" to respond to the virus crisis.

The original Brussels plan for the rescue package would have seen €500bn distributed as non-repayable grants, subsidies from the EU to its poorer members.

Resistance from the "frugals" saw this bargained down to €390bn, with a further€ 360bn issued as loans.

Of the grants, €312.5bn will go to investment plans drawn up by national governments, and the rest to EU-led programmes, such as rural development, research and the green transition.

The amount each country will be eligible to receive will be determined by a weighted formula: 70% of the total to be determined by a "resilience" rating taking into account population and long-term unemployment, and 30% based on how much GDP has been lost because of the virus crisis.

The national programmes submitted by member states will be studied by the EU executive, the European Commission, and afterwards approved by a qualified majority of member states - a minimum of 55% of capitals representing 65% of the population.

Because the "frugals" remain reluctant to allow their more indebted southern neighbours to spend joint funds without labour market reform, there will also be an "emergency brake".

If a group member states it is unhappy with a national plan, they can thus call it in for discussion at a European Council summit, but it is not clear whether this amounts to a full veto.

Rescue up, budget down

The European Union's seven-year budget - or Multiannual Financial Framework - that begins on 1 January is now set at €1,074bn, €20bn less than planned before the epidemic.

The European Parliament will still have to approve the sum.

It now includes a special €5bn "reserve" to help the countries and sectors most affected by Brexit.

And it will be more flexible in allowing money to be moved to traditional regional support programmes and agricultural subsidies, and away from more recent areas of EU interest.

Nevertheless, EU spending must be in line with the Paris Agreement on climate change and the effort to build a carbon neutral economy by 2050.

Key to persuading the "frugals" to put aside their concerns about southern overspending was a decision to boost the rebates that some net contributors receive on their EU dues.

Germany did not need persuading to accept the deal, and its annual rebate remains at €3.67bn.