Seven weeks into the demonstrations marked by weekly clashes in Paris and other French cities, Mr Philippe said the government would introduce a "new law punishing those who do not respect the requirement to declare (protests), those who take part in unauthorised demonstrations and those who arrive at demonstrations wearing face masks."

He also announced plans to ban known "troublemakers" from taking part in protests, in the same way known football hooligans have been banned from stadiums in the past.

In future, Mr Philippe said, the onus would be on "the troublemakers, and not taxpayers, to pay for the damage caused" to businesses and property during the protests which began peacefully in mid-November over taxes but quickly became more radical. 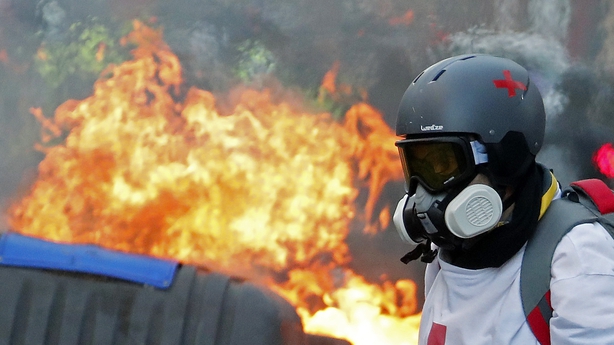 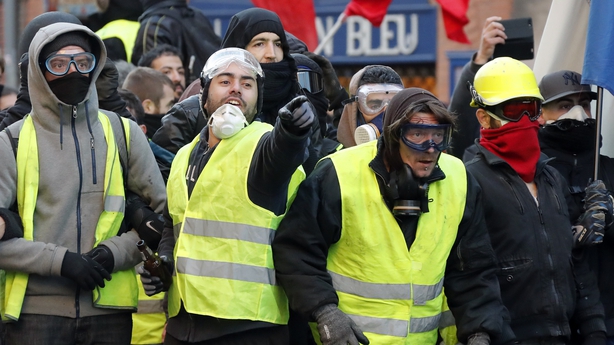 Many of the "yellow vest" demonstrators are demanding that President Emmanuel Macron resign, a demand dismissed as undemocratic by the government.

On Saturday, a group of protesters used a construction vehicle to smash open the doors of the building housing the ministry of government spokesman Benjamin Griveaux.

In other scenes that caused shock, a former professional boxer was caught on camera beating up police officers.

"Those who question our institutions will not have the last word," Mr Philippe said, announcing plans to deploy 80,000 security force members nationwide for the next round of demonstrations.

The images of renewed violence and destruction in Paris on Saturday underscored the difficulty of containing a leaderless movement that appeared to be petering out at the end of 2018 but has since gained new momentum.

Around 50,000 "yellow vest" protesters took to the streets again on Saturday to denounce President Macron's policies, call for his resignation or demand more of a say in national law-making.

Mr Dettinger, known in the ring as "The Gypsy From Massy", a town near Paris, turned himself into police in the capital on yesterday morning.

In a video posted on YouTube on Sunday he described himself as an "ordinary citizen" acting out of anger with what he called the repressive tactics of the police.

"I am a yellow vest. I have the anger of the people in me," he said.

Images of a policeman beating several protesters in the southern city of Toulon on Saturday were also widely condemned.

The police officer - a commander who was granted France's highest award, the Legion d'Honneur, on 1 January - was referred to investigators after appearing to punch one protester in the face several times.

While the number of protesters has dwindled since December, the determination of a smaller but increasingly radical core of "yellow vest" protesters poses a dilemma for the government.

French police signalled a stricter approach last week when they arrested one of the leaders of the "yellow vests", truck driver Eric Drouet, for failing to notify authorities about a demonstration.

The move led to criticism from political leaders on the far right and radical left, who have encouraged demonstrators to continue taking to the streets.

Budget Minister Gerald Darmanin has sought to distinguish genuine protesters, who want lower taxes and more help for low-income families, from those "who are in the business of ultra-violence".

"Faced with ultra-violence, we need to be ultra-severe. It needs to end," he told RTL radio.

The "yellow vest" demonstrations have frequently turned violent since they began in mid-November, particularly on 1 December when crowds ransacked a museum in the Arc de Triomphe and daubed graffiti on the famed monument.

The protesters drew support from a unlikely source yesterday when the two leading figures of the populist government in Rome urged the "yellow vests" to continue, in comments which risk ramping up Italy's war of words with President Macron.

The move underscored the increasingly sour relations between Rome and Paris, which have previously clashed over immigration policy, among other issues.