Those of us of a certain age will remember that Kenneth Wolstenholme line from the 1966 World Cup Final: "They think it's all over ... it is now!"

At times during the past year when one setback was quickly followed by another, Mary Lou McDonald was in real danger of becoming Mary 'Who' McDonald.

Cometh the hour, cometh the woman.

There was a hint of it at the Sinn Féin Ard Fheis in Derry in late November. During her presidential address at the Millennium Forum, the feisty articulate performer had her mojo back.

If there was a contest for leader performances at party annual conferences in 2019, Mary Lou would have easily won the popular vote.

Strife can make us or break us. Sinn Féin was in a cycle of decline. The party's necessity to respond was probably sealed by the Westminster December election results. Its vote slipped in Northern Ireland as the pattern of drift continued.

It was annihilated in Derry (Foyle) where the SDLP leader, Colum Eastwood, had a 17,000 surplus, 57% of the vote as he ousted Sinn Féin’s Elisha McCallion in the hometown of the late Martin McGuinness.

In South Down, Sinn Féin’s Chris Hazzard got a scare from the SDLP’s Michael Savage who cut the gap to 1,600 votes.

Their own voters gave Sinn Féin the very firm message that they wanted their politicians engaged on their behalf in day-to-day issues, at Stormont, indeed even at Westminster.

That hammering delivered in Derry by Colum Eastwood had to be influenced by the abstentionist factor in the House of Commons.

If Sinn Féin, by necessity, was in listening mode and open to absorbing and processing difficult messages, could the same be said for Fine Gael and Fianna Fáil?

Did anyone in Fine Gael HQ debrief Mark Durkan? He was the former SDLP Leader and former Westminster MP who accepted the Fine Gael invitation to run in the 2019 European Elections.

He was available and frustrated because he had lost his House of Commons Foyle seat to Elisha McCallion in the 2017 UK general election.

Durkan is universally respected for his political hard-drive. If John Hume was the SDLP visionary and Seamus Mallon the engineer, Mark Durkan was the draughtsman. Clever. Likable. Thorough.

He agreed to cross the dance floor and step outside the SDLP’s traditional links with the Labour Party and its new found affection for Fianna Fáil. He moved to Dublin and wore out shoe leather, knocking on the doors of estates, attempting to win two Fine Gael seats, alongside Frances Fitzgerald.

In those 2019 Euro Elections Mark Durkan tanked. He received 16,473 first preference votes. He came in a distant eighth in the four-seat constituency.

To anyone who was willing to listen to him, Durkan told how consistently on the doorsteps he heard sad stories about housing, health and a squeezed life. If anyone in Fine Gael’s HQ had sat Durkan down and heard his confessions, it would have amounted to a Chronicle of a Death Foretold.

Any gambler down on luck, any fisherman patiently waiting for hours for a change in fortune will tell you about the burst of energy that flows when the magic happens. The RIC fiasco gave Sinn Féin that hint of daylight and the sunny uplands beyond it. The Black and Tans angle was quickly tagged on and suddenly Sinn Féin had the all that was needed hint of what might be.

As the Black and Tans rumpus gained arms and legs, one of Leo Varadkar’s senior ministers, not normally prone to sending him text messages, dispatched an alarm bell. It said: "The genie is out of the bottle".

Mary Lou came north a number of times in the December/January period. Focused would be one way to describe the interactions. Some would say "formidable". Others may proffer "tetchy".

The day Northern Ireland Secretary Julian Smith gathered the different parties around the table in Stormont he let Arlene Foster lead off for the DUP; when it came to Sinn Féin’s turn it was made clear that Mary Lou McDonald was the Sinn Féin leader. 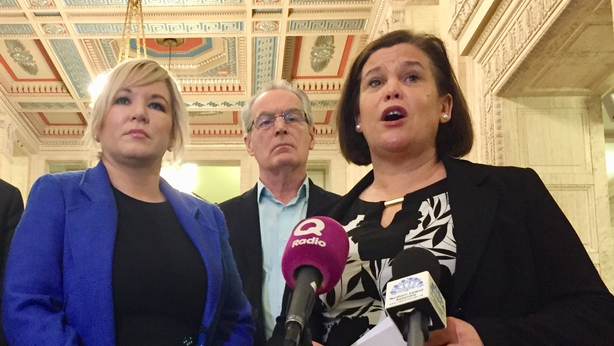 When Sinn Féin came to announce it would be backing the proposals put forward by the British and Irish governments, it was Mary Lou who addressed the media in Stormont's Great Hall.

As was noted by a number of rival parties, Pearse Doherty was on hand to answer the question, as gaeilge, in musical Donegal Irish. Michelle O’Neill, the MLA who would soon be Deputy First Minister, stood respectfully and silently by her leader's side.

More than a party

Fine Gael and Fianna Fáil made much of Sinn Féin’s 'backroom team' tradition during the General Election campaign. Sometimes north of the border the likes of Ted Howell, Padraic Wilson, Tom Hartley, Aidan McAteer, Bobby Storey, Richard McAuley and others are called 'The Felons Club members' or the 'Boys From the Old Brigade'.

The disparagers miss the point. Sinn Féin has a long tradition of planning, strategising, preparing the support base, exploring how to stretch and mould.

The weekend election is a perfect example of how Sinn Féin transferred that tradition of intellectual political intensity and on the ground work to its south of the border activity. It didn't just win the game. At times it seemed to be playing in a different league.

The best way to eat an elephant is in bites. You build a wall brick by brick. Sinn Féin’s election campaign was an extraordinary example of dogged incrementalism. The RIC Black and Tans Affair gave them the start. Then came another gift, another opportunity, the over 65s and the degrading signing-on mullarkey that Fine Gael and Fianna Fáil had not spotted.

Next, you box off all third level students and promise to abandon college fees. Pitch in abolishing property tax. Dilute the USC. And all the time hammer home the issues that had confronted Mark Durkan and anyone who listened during the 2019 European Election campaign - housing, health and a squeezed life.

Sinn Féin are many things but even their most bitter enemies, and they have many, would rarely call them stupid. By the time their election campaign reached its closing stages, the Sinn Féin operation had many of the qualities of the most successful chat show in the history of Irish television. It literally had something for everyone in the audience.

In fact they actually went as far as offering voters a choice - a seat in the Late Late Show audience, a contestant on Winning Streak or a participant on Love Island.

Oliver Callan and his able crew have made great mileage from Murf and Ringer over the years. It will take them time and craft to get a handle on the likes of Eoin Ó Broin and Pearse Doherty.

Ó Broin is whip smart, educated in Blackrock College, the University of East London and Belfast’s Queen’s University. He served three years as a Sinn Féin member of Belfast City Council and then worked with the party in the European Parliament. If there was a transfer market in the political trade, he would be in demand.

Pearse Doherty is another who is respected well beyond his tribe. As Finance Minister, Fine Gael’s Michael Noonan recognised his talents. There is a very firm understanding in sections of the Department of Finance that if a query comes in from the Sinn Féin Donegal TD, it should receive attention.

He is only 42, although he was a senator from 2007 to 2010 and a TD since then. It's no easy life, making the stretch between his base in Gweedore and Dáil Éireann and he went quiet for a short while. But in this General Election Pearse Doherty found new energy.

A feature of the Sinn Féin performance during the election campaign was the party’s ability to respond positively to events. If Sinn Féin were nimble, their opponents, in contrast, were frequently flat-footed, caught in the headlights.

Mary Lou McDonald took the lead role. She was very much the brand.

References to a push for unity were limited. The border poll during the term of a new administration was not a red line. In all the debates and arguments, nobody raised the question of John Downey’s extradition. After Miriam O'Callaghan unearthed issues in Sinn Féin’s response to Paul Quinn's murder, Mary Lou addressed her inconsistencies.

Simon Harris, the Health Minister who had introduced a crucial element of the Sláintecare proposals, making all future consultants appointments for the public sector only from 1 January, was curiously absent from the airwaves.

As the arguments about housing raged, I consulted a wise man. He is not a Guardian reader. He eats his dinner in the middle of the day. "Between NAMA and the properties that were sold off to wide boys who then flipped them on to vulture funds, the housing crisis is a mess," said he.

"There are now players in this game who have resources beyond those of the State and I don’t know where you start to solve the problem."

In the many years that I've used this octogenarian as a sounding board, this was the first occasion that I found him without a solution. To this well-to-do, self-made man, the analysis and policies of People Before Profit offer the nearest thing to a solution. I never thought I'd hear him say so. He never thought he would reach such a conclusion.

If Ireland still had its punt, would there by a run on the currency? How sits that €14.3 billion Apple money that an Irish government said it did not wish to collect, but the EU’s Court of Justice, at the behest of the European Court of Justice, is currently examining?

Now that the election is over, might the border poll issue and the push for unity be taken out of the closet again? Were those opinion pollsters who found the Brexit issue got no traction among voters asking the right questions? Could it be that the Brexit issue has already transported politics and realities south, north, in England, in Scotland and in the European Union to a different place?

In the immediate future Stormont and its power-sharing administration remains the laboratory. It is the place where two traditions must prove their capacity to co-exist and Sinn Féin and the DUP are at the sharp end of that equation.

While Mary Lou McDonald was leading her party to unexpected success, Arlene Foster and Michelle O'Neill were attending a PSNI recruitment drive.

The previous Friday, on Brexit night, Arlene Foster deliberately chose to go south to the Late Late studios in Dublin. Without the brooch.

The report of the public inquiry into the Renewable Heat Incentive controversy will be published next month. It will come the day after the First and Deputy First Ministers attend the Shamrock Ceremony in the White House.

An interesting consequence of Sinn Féin’s surge south of the border is it may well bring a new 'hang tight' dimension to its relationship with unionism.

We live in such fascinating times. There is no script, no precedent for what is happening.

Is it any wonder Gerry Adams has no time to get a haircut.