"It's not so much a youthquake...the last gasp of the pensioners that is holding the old party system together."

That's the assessment of the UCD politics professor David Farrell following the release of the exit poll carried out by Ipsos MRBI for RTÉ, The Irish Times TG4 and UCD.

The demographic breakdown of the first preference vote suggests that support for Fianna Fáil and Fine Gael is by the highest in the 65+ age group - 30% for each party in that demographic.

Support for the two parties that have been the biggest throughout the State's history is lowest among younger voters.

The exit poll indicates that support for Fianna Fáil is 14% among 18-24 year olds. Similarly support Fianna Fáil support stands at 15% for 25-34 year olds.

The demographic breakdown indicates Fine Gael has marginally more support among the younger cohort of voters.

Support for Sinn Féin appears to be strongest among younger voters.

According to the exit poll, support for Sinn Féin is the same in both the 18-24 and 25-34 age categories where the party stands at 32%.

Support for Sinn Féin looks lowest among people who are over 65 where it stands at just 12%.

The margin of error in this exit poll is plus or minus 1.3%.

Support for the Green Party is also highest among 18-24 year olds where the Exit poll puts it at 14% - some nine points higher than the 5% support it has among those over 65.

Speaking on RTÉ radio this morning, the outgoing Solidarity People before Profit TD for Dún Laoghaire, Richard Boyd Barrett, has welcomed the way the exit poll suggests there has been a historical decline in support for Fianna Fáil and Fine Gael.

He said this trend will continue to rise and was exciting.

The demographic breakdown in the exit poll indicates that may be the case but counts across 27 count centres will tell the real story of Election 2020.

Geography is one aspect of the demographic breakdown of the exit poll that will give rise to some concern in Fianna Fáil. 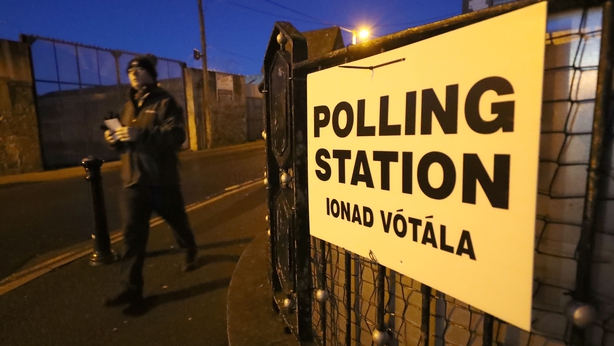 For the most successful party in the history of the State to recover any of the way to pre-crash levels of support it needs to have a good election in Dublin.

But the exit poll points to 14% support for Fianna Fáil in the capital - some eight points off its level of support nationally.

The party has put huge efforts into promoting its Dublin candidates in a bid to regain ground in the capital.

If the exit poll result is borne out in Dublin, the party may not pick seats in some constituencies where it expected to make gains.

Fianna Fáil's support in the rest of Leinster and Munster is 26% - four points higher than the national figure. It stands at 22% in the Connacht/Ulster area.

Fine Gael's support in Dublin stands at 21% - some seven points ahead of Fianna Fáil.

Fine Gael's support stands at 22% in the rest of Leinster and Connacht/Ulster. Support for Fine Gael appears to be highest in Munster where it stands at 25%.

The exit poll indicates that Sinn Féin's support is highest in Connacht/Ulster (25%) and the rest of Leinster (24%).

The party's support stands at 22% in the capital and 18% in Munster - which is some four points lower that the party's overall national figure.

Not surprisingly support for the Green Party is highest in Dublin at 13%.

Back to Professor David Farrell. Looking at the exit poll he said: "The risk of another election is very high now".

The next 72 hours will tell a lot more about that theory.