It has been a disappointing election for a number of high profile politicians, as three Ministers and one frontbench Fianna Fáil TD lost their Dáil seats.

She was eliminated on the sixth count.

Minister for Transport, Tourism and Sport Shane Ross lost his seat in Dublin-Rathdown, being eliminated on the fifth count.

Speaking to RTÉ News earlier, Mr Ross said it was "not altogether a surprise", but he was disappointed.

I think the position [now] is I certainly will not be elected, says Shane Ross #GE2020 https://t.co/9zMMPw4asx pic.twitter.com/fGVlmzy664

She secured 10,612 first preferences but it was not enough to take one of the four seats on offer.

Minister for Children Katherine Zappone is also in considerable difficulty in Dublin South-West.

Some Fine Gael junior ministers, such as Pat Breen in Clare, along with Michael D'Arcy and Paul Kehoe in Wexford could lose out too.

It was also a disappointing election for Fianna Fáil's Lisa Chambers who lost her Mayo seat on the seventh count.

Ms Chambers, who was a frontbench TD and Brexit spokesperson for Fianna Fáil, spoke of her disappointment over losing her seat.

She said she was "better as an individual" thanks to the time she spent in political life. However, she conceded that "today was not her day".

"It is time for all of us to take a moment to pause and reflect and see where we go from here," she said.

Former Labour leader Joan Burton lost her seat in Dublin West after first being elected to the Dáil in 1992.

She was eliminated on the fifth count, which also saw the re-election of Taoiseach Leo Varadkar. 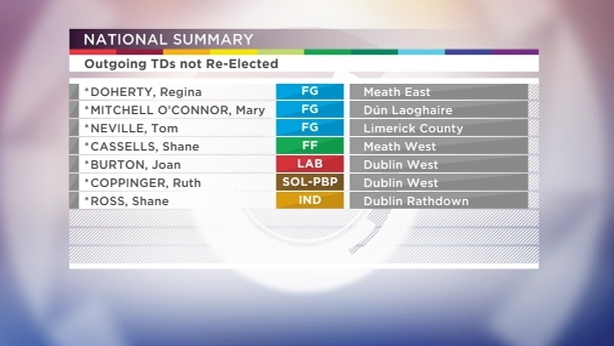 With counting continuing in more than 20 constituencies on Monday, there could still be some more big-name political casualties. Seat projections suggest that the path to forming a government could be intricate and lengthy.

In Kerry, outgoing Fianna Fáil TD John Brassil has conceded, saying that "barring a miracle" he has lost his Dáil seat.

Outgoing Fine Gael TD for Dublin North-West Noel Rock also indicated that he would be conceding his seat, saying on Twitter that it has "been the privilege of a lifetime to serve you in the 32nd Dáil".

While our performance has improved compared to 2016 in this constituency configuration, it looks like it may not be enough.

I'd like to sincerely thank every volunteer and indeed all 3,513 voters.

It has been the privilege of a lifetime to serve you in the 32nd Dail. pic.twitter.com/qLwq5EmXqe

Labour's Kevin Humphreys conceded that he will not retake his seat in Dublin Bay South, and expects Sinn Féin's Chris Andrews to take one of the four seats in the constituency.

In Dublin Central, Independent councillor Christy Burke looks set to be in contention for a seat as he is benefiting heavily from Sinn Féin leader Mary Lou McDonald's transfers.