RTÉ's Education Correspondent Emma O Kelly looks at some of the most frequently asked questions about this year's Calculated Grades system for Leaving Certificate students.

What are Calculated Grades?

They are grades arrived at by combining information from teachers and schools as to how a student would have been expected to perform had they sat their Leaving Cert exam, with data held by the Department of Education on the past performance of students nationally and in individual schools.

What role does my teacher and my school play?

Teachers were asked to use their professional judgement to estimate how well each of their students might have performed in this year's Leaving Cert exam.

They have produced estimated percentage marks - not grades - for each of their students.

Subject teachers in a school were asked to work together to ensure they were all applying the same standard, and this process will have been overseen and signed off by the school principal. All this work has already been completed.

How did my teacher estimate my mark?

Teachers were allowed to use a range of data in arriving at their mark, including coursework, end of term tests, mock exams, etc.

They were advised, however, to exercise caution with mock exam results because those results are not always reliable indicators of how a student will perform in the actual exams.

Teachers would also have taken into account a student’s general ability as well as their performance in class. They had quite an amount of leeway. The core driver was their "professional judgement".

I did hardly any work in 5th year, and it showed in my end of term tests and in my mocks. But I was planning to really get the head down in the final months, and felt fairly confident that this would work for me. Am I in trouble?

Not necessarily. And this is a situation this reporter (see below) strongly empathises with!

Teachers are expected to take into account different patterns of behaviour when it comes to studying.

Some students are consistent workers throughout the two years of the senior cycle, others rely on hard work in the months and weeks leading up to the exams and can do well as a result.

It is for reasons like this that a teacher's professional judgement is key. They will know that different approaches work for different kinds of students and they should have tried, as best they could, to take this into account.

I rooted out my old 5th yr report card. Not pretty! I would have been in Big Trouble with calculated grades 😬. Good luck to all students & teachers! I do believe that all will work hard for as fair an outcome as possible. pic.twitter.com/oXAKu9yOuj

What other information have my teachers and my school provided?

Teachers were also asked to rank students in their class. They were asked to draw up a list of students in each class group for their subject in order of their estimated level of achievement.

All of this information has been submitted by schools to the Department of Education.

What role does the ranking of students play in this process?

The ranking information that schools have submitted is as important and could even be more important, than the estimated marks that have been submitted.

While the mark your teacher has come up with may be changed - for better or for worse - the class ranking will not. If your teacher thinks that you are the second strongest student in her class then that will be reflected in the grade that you receive.

What is happening now with the marks and rankings that the teachers and schools came up with?

The Department of Education is using this information to create actual grades for students. This is a complicated process.

They want this year's results to be comparable to the results of previous years, so using complex algorithms they are applying historical national data to the estimates sent to them by the schools.

That data includes an individual school’s performance over the past three years in the Leaving Certificate exams. It also includes school Junior Certificate results.

The department says this process "will provide a pattern of expected results for the school group at each subject and level".

This means for instance that a school’s results this year should tally overall with the kind of results that same school has achieved in recent years.

I’m worried. My school doesn't generally get great results in the Leaving Cert exams. I expected to do much better than my classmates though, because I am academic and I’ve been working very hard. I’m worried that if school's results are standardised, to be similar to their results in previous years, that I will lose out. I've seen what has happened in the UK.

There was outcry this week in Scotland and England when Calculated Grade results published there revealed that students from schools in poorer areas were more likely to have had the marks given to them by their teachers reduced under the national standardisation process.

The process also seems to have particularly favoured affluent students, with the results of students attending private schools in England rising by 4.7% for instance.

There are concerns that the same could happen here, that students could be judged by their school’s postcode as opposed to their own ability and hard work.

The Department of Education has attempted to reassure students. It says "work is continuing to ensure that all students are treated fairly". (It is the department that emphasised the word "all").

The Department has said the standardisation process "does not impose any predetermined score on any individual in a class or in a school".

On the particular issue of a bright and hardworking student in a school that does not normally obtain very high Leaving Certificate results, it said "there will be no barrier to any excellent student achieving high grades in any school, provided the school has recognised the atypically high performing student".

I still don't feel that reassured.

I’m not sure that I blame you. The body that standardised the results in England defended the fact that the downgrading of results there affected students in disadvantaged schools disproportionately.

It said teachers in those schools had overestimated their student’s results. The Minister for Schools told Channel 4 News that had those results not been downgraded then this year's results would have been 12% higher overall compared to last year.

And there would have been 38% more A grades. He argued that the step was necessary in order to ensure that this year’s results were comparable to those of previous years.

The case was similar in Scotland but the outcry was so great that Scotland’s Minister for Education performed a spectacular U-turn and announced that all downgraded results would be replaced with the original grade that the teacher had awarded in the first place.

At least this controversy across the water will help to concentrate minds in Ireland.

Why are the results out so late this year?

This is an entirely new process. It is a complex one and it is really important that the Department gets this right. It is not something that can be rushed.

What if I'm not happy with the results that I get on 7 September?

You can appeal. But that appeal will be limited to how your data has been processed within the Department of Education and whether any administrative error took place.

You cannot challenge the estimated mark that your teacher arrived at for you.

If you appeal you are entitled to see the mark and ranking that the school submitted to the department but that is the only school-generated data that you will be allowed to see. The appeals process will open on 14 September.

You can of course always decide to sit the Leaving Certificate exams.

The Department of Education has been at pains to point out that the exams have not actually been cancelled.

It hopes to be able to run them in November. Any student who wishes to sit the exams may do so. But their results will come too late to be of use in applying for college this year.

How will I receive my results?

Calculated Grade results will be issued directly to students at 9am on 7 September via the Department's online student portal.

They will be sent simultaneously to students’ schools. 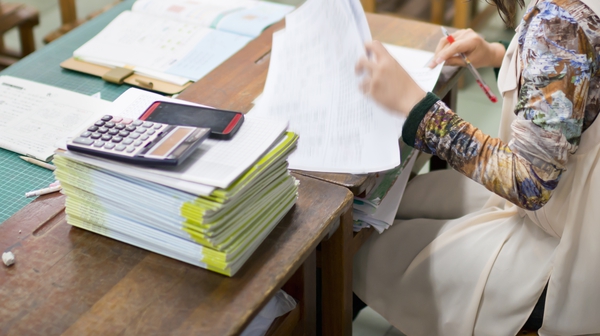