The Taoiseach has said he does not want to raise hopes or expectations by speculating as to when schools might reopen.

Leo Varadkar said the Government was keen to reopen schools in the early phases of easing restrictions, but as the plan to do this had not been completed, he did not want to speculate.

Schools have been shut since the middle of March as the Government moved to stop the spread of Covid-19.

He said: "I understand a lot of people are finding the lockdown difficult and I'd prefer not to raise hopes or raise expectations only to dash them."

Taoiseach Leo Varadkar has said he does not want to raise hopes or expectations by speculating as to when schools might reopen | Read more: https://t.co/4aM6oaDiGb pic.twitter.com/gdYrf7Ydsy

Mr Varadkar added he would like to see schools reopen, even for a day or two a week, because of the impact the restrictions could be having on the mental health and education of students.

He said he hoped the plan to ease restriction measures would be completed by the end of April or early May, adding that he hoped to give certainty to people at that time.

Meanwhile, the General Secretary of the Irish National Teachers' Organisation (INTO) has said he would like to see primary schools re-opened on an "orderly, phased basis".

John Boyle said the INTO would want to make sure that protections are in place for students, parents and teachers before schools re-open.

Speaking on RTÉ's Today with Sean O'Rourke, Mr Boyle said there are ten weeks left in the primary school year so "it is feasible" if public health experts advise that primary schools could re-open at some stage in June, but added "it's a huge decision".

Mr Boyle said there have been no discussions between the INTO and the Department of Education and he said a working group needs to be set up with the department to examine the issues involved.

He said different issues emerge in different schools, with transport challenges in small, rural schools where there are also mixed-age classrooms.

He said that classrooms need to be 60 square metres in size to allow adequate social distancing for 15 children and two adults - one teacher and an SNA.

He said any return needs to be on "an orderly, phased basis" and teachers need the opportunity to see all students, but cannot teach 15 children in the classroom and 15 at home at the same time.

He said classes could rotate between mornings and afternoon without play in the yard and with a deep clean carried out in between.

Mr Boyle said he sincerely hopes an immediate re-opening is not announced in early May without talks with teacher's representatives.

Meanwhile, the Association of Secondary Teachers, Ireland (ASTI) said members are committed to supporting students as was asked of them by Minister for Education Joe McHugh.

Speaking on the same programme, ASTI President Deirdre McDonald said: "If one academic year runs into another, we hope there would be some break before the next academic year starts".

Ms McDonald said the ASTI would not seek extra money should teachers have to work extra hours.

"What we have committed to give, we will give wholeheartedly", she said, adding "this is all crystal ball gazing right now."

Ms McDonald said members remain committed to supporting Leaving Cert students in July and the association will continue to follow the advice given by the National Public Health Emergency Team.

She said that the timetabling of subjects and students at secondary schools would be much more problematic to facilitate.

Earlier, Dr Gabriel Scally, honorary Professor of Public Health at the University of Bristol, said schools have to reopen sometime but the question remains as to how this can be safely done for pupils and teachers.

He said consideration should be given to bringing smaller groups back to the classroom and attending on different days, in order to enable social distancing.

He added re-opening schools would "all depend on how good we have got at keeping the virus down" and schools should not reopen if there are community cases.

There has been no change in Department of Education thinking regarding the closure or potential reopening of schools, according to a spokesperson.

Responding to comments made by Minister for Health Simon Harris over the weekend - where he said he would like to "see a situation" where schools could reopen, if only to allow students return for one day a week - the department reiterated that any decision in relation to the reopening of schools will be based on up to date public health advice.

A spokesperson said the department would be seeking that public health advice in the days prior to 5 May and that a decision regarding what will happen in schools after that date will be based on that advice.

The spokesperson said there was no other change to that current decision.

The spokesperson also confirmed that any decision as to the reopening or continued closure of schools will be made by the Department of Education. 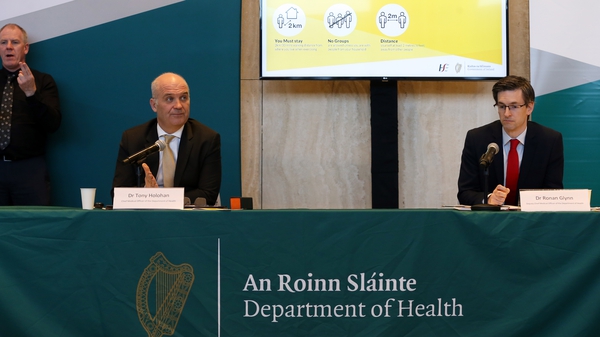 As it happened: Monday's Covid-19 developments