More than 200 pharmacy students demonstrated in Dublin city centre this morning against what they say are exorbitant fees that have trebled in recent years to more than €8000, and over the removal of payments for four- and eight-month internships they are obliged to complete.

While the students welcomed a "clarification" received yesterday that their internships could be "paid or unpaid", they said the clarification was vague and they needed assurances that they would be paid.

The students rallied outside Leinster House before marching to the nearby headquarters of the Pharmaceutical Society of Ireland, which regulates the sector. They handed in a petition to the society.

Student leaders said there that there was a danger that the profession would become the preserve of "the children of wealthy parents, or the children of doctors who didn't get into medicine".

They said most students could not afford to work for free for periods of four and eight months, and to pay final year fees of up to €8,500.

Changes were introduced in recent years to how pharmacists are trained and from this year students will no longer be paid for an eight-month internship that they complete during their final fifth year.

In the past, pharmacy students could earn up to €22,000 for full-time work they undertook in their final year.

The students, who are being supported by the Union of Students in Ireland, are calling for a reversal of what they call a ban on payments. 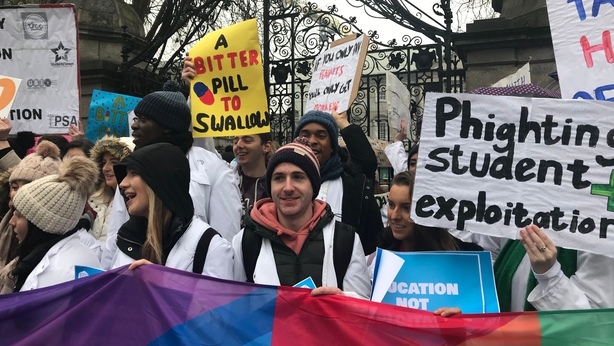 They say the changes are placing students under immense financial pressure and mental strain.

Yesterday evening the three colleges responsible for the delivery of the country's pharmacy programmes said they had received "clarification" from the body that regulates the profession stating that there was no legislative or accreditation ban on paying students for their placements.

In a joint statement, the Royal College of Surgeons in Ireland, UCC and Trinity College Dublin said that in light of this clarification future placements could be "either paid or unpaid".

The colleges say that they reiterated their concerns as recently as earlier this month at a meeting with the society.

USI said it cautiously welcomed today's statement. It called for immediate clarity on their position, given, it said, that the colleges had "previously refused to accept any responsibility for the financial burdens placed on students by the decisions they have made".

In 2014 a new structure to govern the formation of pharmacists was introduced.

What was a four-year degree requirement, followed by a one-year internship, was replaced with a five-year Masters programme, with unpaid internship components.

Students continue to spend their final year working on a placement, however they must pay the equivalent of a Masters fee for that year. The fee charged by the different colleges ranges from €7,500 to €8,500.

The changes were agreed by regulatory body the PSI.

In a statement the society said the new programme was designed following a review process "to align the qualification to internationally recognised standards with an approach taken so that learning and practical elements occur in an integrated way."

In reference to unpaid internships it said "one of the educational principles underpinning the new integrated MPharm programme is the importance, and maintenance, of the student - mentor relationship and ethos, as opposed to an employer and employee relationship".

The 2010 review on which the introduction of the new programme structure was based warned, however, that "removal of all payments and a move to five-year charging could decrease the attractiveness of pharmacy as a subject of study and impact upon recruitment".

That review, which was carried out by UK-based academics, heard complaints of a shortfall in funding for pharmacist formation.

A subsequent 2012 report noted in relation to the introduction of a Masters fee for the final year that "the most important consideration" was the students' ability to pay.

It said that Pharmacy would suffer if the fee was outside the reach of students.

However that report went on to state that it was "entirely appropriate" that students graduating into a lucrative profession should be asked to contribute to their qualification at the final stage.