Changes to the Leaving Certificate grading system have led to a widening of the achievement gap between disadvantaged or DEIS and other schools, according to an ESRI study.

The institute also said the grading system may be causing "demoralisation" and stress among some students.

ESRI Research Professor Emer Smyth said that overall grades have not improved, but a greater number of students are being exposed to more complex material through higher level courses.

Speaking on RTÉ's Morning Ireland, she said that students who stick with higher level courses fell that some of the subject, particularly maths, are occupying a lot of their time, while those students studying at ordinary level feel the gap is too great.

"Many of them feel that the gap is too great between higher and ordinary level and that doesn't really fairly reflect the kind of work load they are taking on.

"So they kind of feel that no matter how well they do, or how hard they work, there's a limit to the the grades and the points that they can achieve."

The study examines the early effects of the 2017 changes on student perception, behaviour, and performance in the exams.

It finds that while the changes have led to an increase in the number of students opting for higher level papers, which was one aim of the reforms, this has not been accompanied by improvement in attainment.

Students have also reported feeling additional pressure to opt for higher level papers as a result of the changes.

Prof Smyth said that students in DEIS schools have not gained in the way they should have under the new changes, but this can be traced back to the junior cycle, which shows that there are big differences between DEIS and other schools at the take-up of higher level at junior level.

In 2017, the old alphabetical system of grading bands was replaced by a numerical one, with significantly fewer bands.

The new structure also for the first time awarded CAO points to students who achieved 30-39% in a higher level paper, a H7 under the new system.

This was to encourage more students to sit higher level papers. Previously, there were no CAO points awarded for a mark under 40%.

This study compares the results of the past two years - under the new system - with the outcomes of previous years.

It finds that while in general students adopted the new grading scheme without much difficulty, increased higher level subject take-up has not translated into increased attainment.

Looking at Maths and Irish, the study found a significant drop in grades in both subjects at higher level as more students opted for those papers. 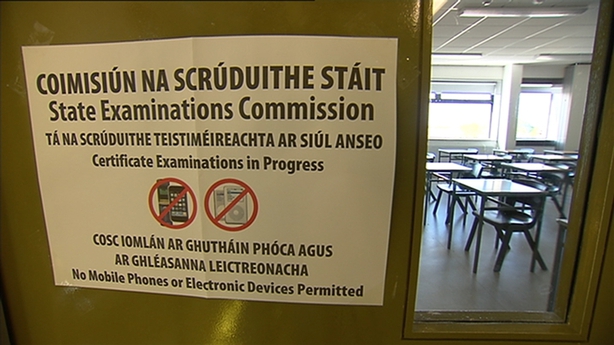 The results also reveal a growth in inequality between DEIS and non-DEIS schools with the gap in CAO points achieved by students in the different sectors widening.

It finds a greater decline in the higher level Maths results obtained by students from disadvantaged backgrounds or attending DEIS schools. By contrast, there is no decline in Maths results achieved in what they ESRI described as "Irish-medium schools".

As part of the study, ESRI researchers spoke to sixth year students and teachers in ten schools, who were selected to be representative of the post primary sector as a whole in terms of gender and socio-economic make up.

It gathered their views on the new system, as well as aspects of the Leaving Certificate process in general, such as the awarding of bonus CAO points for higher level Maths.

The impact of the grading changes on students choosing between higher and ordinary level papers was, according to the study, "the subject of considerable debate among students and teachers across all the case-study schools".

It reports that both higher and lower-performing students felt the gap between the points awarded for higher and ordinary papers was too wide and that ordinary level points did not fairly reflect the workload and effort involved.

The 2017 changes saw the maximum number of points awarded for ordinary level papers reduced and some students complained of a negative impact in terms of their motivation, engagement and academic self-image.

Students and teachers spoke about the incentives offered for persevering with higher level courses, particularly for Maths in terms of bonus points, but also in terms of points now awarded for lower marks in those papers.

While some supported the concept of bonus points, others felt it was unfair to solely incentivise this one subject.

Students suggested that the large discrepancies in points for higher and ordinary level subjects were unfair for lower-attaining students.

According to this report "the negative self-image of lower-performing students was further reinforced by the dominance of the 'points race' and the perceived excessive emphasis on maximising achievement in the exams".

"It doesn’t really matter for me what subjects I study, it’s my points … Like I’m not interested in most of the subjects I am studying, it’s just my points that I have to keep up." (Student)

Staff at the schools also spoke about the "fixation of students on marking schemes and the value of rote learning in maximising their performance".

"That’s [points] always on their minds, you know. Even when you’re going through exam papers they’re on about marks: accumulating marks … Where will I lose, where can I gain marks?" (Teacher)

The report speaks of the "normalisation" of grinds, which were prevalent across all ten of the schools researchers visited.

In its conclusions the report states that:

The report makes a number of wider conclusions too: