A Carlow man has been sentenced to three years in jail for animal cruelty.

Judge James McCourt also banned Kavanagh from being involved with canines or equines for the rest of his life.

His wife Jenny Kavanagh, who pleaded guilty to 30 charges of permitting animal cruelty, was given a 12-month suspended sentence.

She was banned from having canines for 15 years.

Over 11 days, 340 dogs and 11 horses were removed from the property of licensed dog breeders, at Myshall in Carlow.

The searches were carried out by gardaí and the ISPCA.

Jim Kavanagh, 48, pleaded guilty to 30 charges, with 96 other counts to be taken into consideration by the court.

Jenny Kavanagh pleaded guilty to 30 charges in relation to 15 animals.

She said dogs were observed in cages with no water, with bedding that was urine soaked and covered in faeces, horses with bones protruding, and a number of dead animals were found around the property.

Garda Dennehy said the animals were "forced to live in absolute squalor with straw that hadn't been changed in a long time".

The dogs appeared "scared" and "unsocialised", she said.

He described what they found as "deplorable conditions", which were "shocking, very shocking". 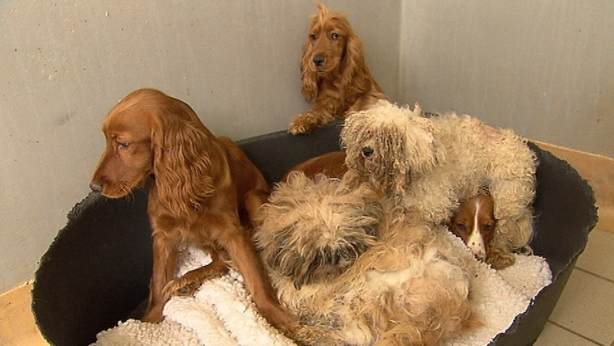 Mr Dowling said the condition of one animal, was "one of worst cases of animal cruelty" he'd seen in a long time.

He described "recurring issues" with the dogs' with eyes, ears and coats.

He observed bitches due to pup and said of one: "If she whelped in that environment they (pups) wouldn't have lasted very long.

"20 years in the job and never before have I come across something like this.

"The scale and severity was far and above anything I've come across."

Due to the large number of animals involved, the ISPCA enlisted the help of other SPCAs and the Dogs Trust.

Four horses and 20 dogs had to be euthanised.

The court was shown a ten-minute video of the search in which dogs were seen feeding on a decomposing horse carcass.

A dead sheep and lamb were seen on a trailer, suspected to have died during lambing.

There we also a number of dead dogs in sheds and around the property, which had not been disposed of.

Following the search, a closure order was served because of the "grossly substandard" conditions and the "massive animal welfare and health issues".

There were also public health conditions because of the sheds' proximity to a river and water treatment facility.

Six months prior to the search in 2015, the Myshall property was inspected by Carlow County Council for the purpose of granting a dog breeding licence and no issues were raised.

Colm Cody SC, representing Jim Kavanagh, said the evidence was "grim and inexcusable", but said "what we are dealing with here is neglect rather than cruelty".

Roisin Lacey SC, representing Jenny Kavanagh, said the Kavanaghs and their children have been subjected to abuse and threats on social media, which included giving details of their address and "talk about burning them out".

Jenny Kavanagh was described as a housewife, carer, mother and "an ordinary woman who has become embroiled in an extraordinary situation".

A large number of animal welfare activists were in court for today's hearing. They gathered outside the courthouse holding signs and placards. 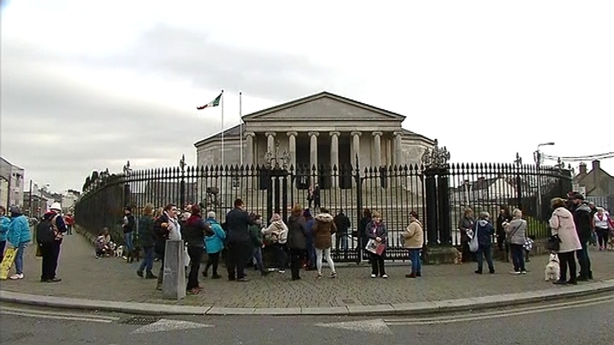 In passing sentence on Jim Kavanagh, Judge James McCourt said it was "extraordinary to find someone of farming stock guilty of such an appalling crime".

He said the images were "hard to comprehend" and the "scene was biblical".

In sentencing Jenny Kavanagh, he said a custodial sentence on the mother of five would serve no purpose.

However, he said he found it hard to credit that she had not been aware that something was amiss, with dead carcasses around the place.

Animal welfare campaigners cheered in court when the sentences were handed down.

A statement was issued on behalf of 52 animal rescue centres thanking Carlow gardaí for organising the raid and seizing the Myshall animals.

They said: "The independent animal rescue community welcomes the custodial sentence imposed on James Kavanagh. We hope it marks a new departure in sentencing for individuals guilty of animal cruelty."

Search under way for missing fisherman in Co Mayo