The High Court will give its decision next Wednesday on whether or not to allow objectors to Apple's €850 million data centre in Athenry, Co Galway to appeal its decision to let the project proceed to the Court of Appeal.

Two weeks ago, the court rejected applications by Athenry residents Allan Daly and Sinead Fitzpatrick, as well as Dublin-based businessman Brian McDonagh, seeking to have the permission granted by An Bord Pleanála for the 500-acre development overturned.

Mr Daly and Ms McDonagh then applied for a certificate from the High Court allowing them to appeal the decision to the Court of Appeal.

The grounds upon which they were seeking to appeal were presented to the court yesterday and this morning. 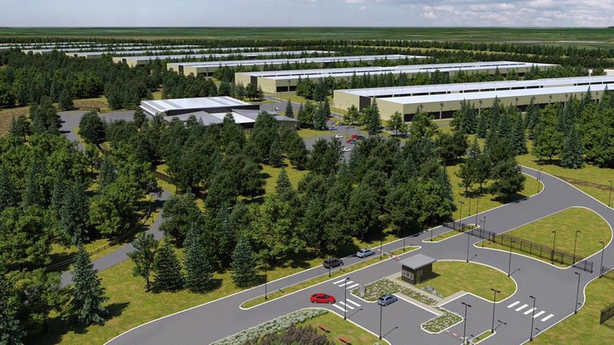 Apple's planning application only related to a single data hall, but that development is part of a wider master plan, which could lead to up to eight such halls being built on the site at Derrydonnell Woods.

In order to grant permission to appeal a High Court decision, a judge must be satisfied the issue in question is of exceptional public importance and it must be in the public interest that it be pursued.

That court will only consider an appeal if the case involves a point of law of general public importance or one necessary in the interests of justice to determine.

This morning, the court was also told that Mr McDonagh did not wish to apply for a certificate to appeal the High Court's decision to the Court of Appeal.

His barrister said Mr McDonagh had also agreed not to challenge the outcome of the current case before the High Court in the Supreme Court and to withdraw other actions before that court.

An Bord Pleanála's legal team of Senior Counsel Nuala Butler and Phillip Lee Solicitors, as well as Apple's senior counsel Rory Mulcahy, indicated if this happened their clients would not pursue Mr McDonagh for costs in his failed High Court case.