People arriving at Irish ports and airports will need a negative Covid-19 test from Friday, the Cabinet has agreed.

Travellers can have either a professional antigen test taken a maximum of 48 hours prior to arrival, or a PCR test taken up to 72 hours earlier.

The requirement for a negative test applies to all arrivals, including those from Britain.

The Department of Transport is in discussions with airlines and ferry companies to ensure certified antigen tests or PCR tests are checked before people board flights or boats to Ireland.

The Government is to introduce legislation allowing for the re-establishment of mandatory hotel quarantine to the Dáil on Thursday.

It has also agreed that adults and children should reduce their social contacts in the weeks ahead, while masks for children from third class upwards will also be advised.

The Cabinet will also examine legislation that would allow for the re-introduction of mandatory hotel quarantine.

Speaking on his way into the Cabinet meeting, Taoiseach Micheál Martin said there has been some improvement in Covid-19 case numbers, the five day incidence level of the disease and "the overall picture", but that this was from a high level and said "vigilance is important". 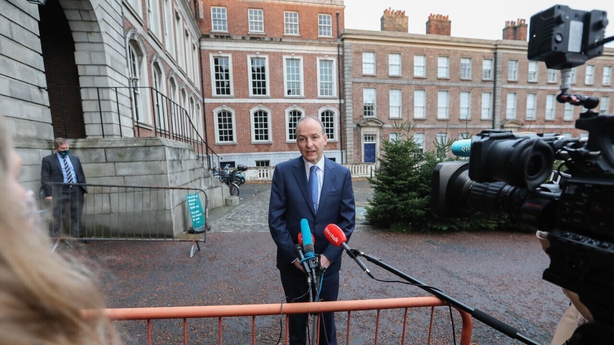 Mr Martin said the "key evidence from the public health doctors yesterday was a very, very high incidence rate of Covid among five to 11-year-olds and their parents".

"This is what is concerning the public health doctors and hence they are saying to reduce the level of socialisation across society and in particular inter-household mixing," Mr Martin said.

Asked about the new Omicron variant, he said that "we do have to allow the science to inform us in terms of how infectious it is, how virulent it is and the impact of vaccines on it," and more should be known about it in the next two to three weeks.

"In the intervening period we have to take the precautionary principle in respect of how we behave in that context," Mr Martin said.

Minister for Health Stephen Donnelly said if the "relatively small number of people" who remain unvaccinated chose to get the vaccine in the next two weeks, Covid-19 hospital numbers would reduce by half and ICU Covid numbers would fall by more than that.

He said the NPHET analysis showed what the situation is like versus the "sobering modelling forecasts" of two weeks ago.

"I'm delighted to be able to say that we can really see the impact of the efforts that people are making," Mr Donnelly said.

Minister for Transport Eamon Ryan said he believed legislation for mandatory hotel quarantine would be a "preparatory move at first" and there are no flights from so-called "red list countries coming in at the present time".

In relation to the introduction of antigen tests for inbound travellers, Mr Ryan said he believed it could be introduced "fairly quickly".

Minister of State for Skills and Further Education Niall Collins said the new guidelines will be "optional, not mandatory" but people should "exercise your best judgement for the right reasons".

Speaking on RTÉ's Today with Claire Byrne, he said that "we are in a very, very good space right now relative to last year, society hasn't closed down and most areas and activities are open and remain open".

Minister Collins said the wearing of face masks is not mandatory in secondary schools and the same approach will apply to primary school children aged over nine.