There have been 1,491 new cases of Covid-19 notified to the Department of Health.

There were 193 people in hospital who have tested positive for the virus, a rise of six overnight, of whom 28 are in ICU, two fewer than yesterday.

There were 1,641 new infections reported in Northern Ireland today and three further deaths.

"The positive news is that take-up in Ireland is extremely high, which shows people understand the benefits for themselves and for their communities of getting vaccinated.

"These figures continue to increase, and each person who has come forward should be commended."

Dr Holohan added: "It's understandable that after the period of time that Covid-19 has been with us, that some people become tired of it. But the virus does not become tired.

"It doesn’t care if we are fed up, it only sees the opportunity to spread from person to person when we let our guard down.

"Risk assess your plans this weekend. Remember that if you have any cold or flu like symptoms at all, you should err on the side of caution and stay at home - do not meet up with others, and do not go to work.

"If you are an employer, remind your employees to continue working from home where possible for now, and not to attend work with any Covid-19 symptoms. Vaccines work, but they must also be supported by us all choosing to act as safely as possible."

Meanwhile, the Health Service Executive revealed that walk-in vaccination clinics will reopen in many locations across Ireland this weekend.

Health Service Executive CEO Paul Reid has spoken of his pride after the six millionth vaccine dose was administered this morning.

"It is a very proud day for Ireland with Kellie Harrington reaching the Olympic final and that we have reached the six millionth vaccine," he told a media briefing.

He described it as a "great milestone" to have six million vaccines administered.

He said uptake of the vaccine continues to remain strong. This week the HSE estimates they will administer 230,000 vaccines and 200,000 next week.

Mr Reid confirmed that registration on the HSE's vaccination portal would open for 12-15 year old's next Thursday, 12 August.

HSE CEO @paulreiddublin says there have been more than six million vaccines administered in the country | Read more: https://t.co/LgdqO9hgdW pic.twitter.com/9xjqjtotCo

He added that the attendance at the walk-in vaccination centres at the weekend was "remarkable".

He said this was a "significant milestone for the vaccination programme."

"Young people showed up in great numbers. It was a great moment for the HSE, for Ireland and for the vaccination programme."

"We were genuinely taken aback by the overall experience."

Mr Reid said attendance was strong in both rural and urban areas. He said of the 30,000 of those who attended walk in "over half" hadn't already registered on portal.

Of those, almost 80% of people were unvaccinated and 6% were fully vaccinated.

He said of 31 patients who were partly vaccinated, 27 had an underlying condition.

Dr Henry said Donegal remains "quite high" with a 14-day incidence rate of 795. While it has decreased slightly over the last two weeks, it still remains the highest followed by Louth and Galway.

Mr Reid said he and Dr Henry held a conference call last Friday with the maternity units which were not in full compliance with all HSE's advice on the attendance of partners at maternity units.

They were given a "commitment" from those hospitals that there will be "greater communications" on the "exceptions" where partners are not allowed to accompany expectant mothers.

Dr Henry said that expanded guidance would be issued to maternity units tomorrow to look at the attendance of partners at the 12 week scan and Caesarean sections also.

Mr Reid said the HSE is waiting for further guidance from the National Immunisation Advisory Committee and policy decision from government in relation to Covid-19 booster shots.

"We do envisage there will be a booster campaign and we are certainly planning for that scenario."

Mr Reid also said that the HSE believes that there is further potential for walk-in vaccination facilities, "therefore we will be running them again this weekend".

He directed people to the HSE website for further information.

HSE National Lead for Testing and Tracing Niamh O'Beirne said demand for testing remains high but it is steady. She said it could range anywhere from 13,000 and to 22,000 a day.

Pop-up test centres are still operating to support communities that are very busy for testing "which continues to be Dublin, Donegal, Athlone and Cork," she said.

An additional pop-up testing site will open this weekend in Dundalk.

The positivity rates in walk-in testing is around 12% and "that is continuing to rise," she said.

"We continue to have both high referrals from the 15 to 24 age group but also high positivity. Positivity in that group has now risen to 19.5 %."

Ms O'Beirne said that communions and confirmations and gatherings around those events "have been consistently a problem throughout the pandemic when they did take place, similar to weddings, funerals and indoor gatherings".

"Not necessarily the church ceremony but the after events with family and friends do provide environments for the disease to transmit," she said. 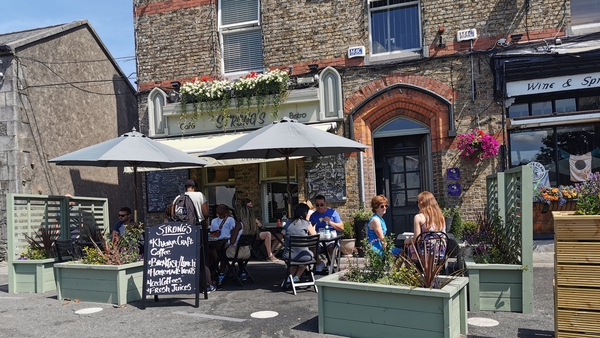 HSE urges public to 'stick with us' after regulation confusion