Minister for Health Stephen Donnelly will sign all the required regulations, which will bring mandatory hotel quarantine in Ireland into force.

It is expected that the facilities will be up-and-running before the end of the week.

It is understood that the contract is to be awarded to the Tifco Hotel Group, which has 24 hotel properties with more than 2,550 rooms in total.

The move means that anyone who travels from 33 specified countries will have to undergo two-week mandatory quarantine in a hotel, at their own cost.

The same applies to any passenger who arrives in to the State without the required negative PCR test for Covid-19.

Speaking earlier on RTÉ's News At One, Taoiseach Micheál Martin said he believed the new rules would have a deterrent effect against travel into Ireland, adding more countries could be added to the list.

However, Sinn Féin's Health spokesperson David Cullinane said that all passengers engaging in non-essential travel should face such a quarantine regime.

He said he also wants to see the detail of the provisions, such as how the gardaí and Defence Forces will engage with private security firms, and how workers in the hotels will be protected.

The move comes as the HSE's lead for infection control said today that Covid-19 case numbers are "stuck" and possibly rising, and warned of a real danger of another surge of the virus.

Speaking on RTÉ's Morning Ireland, Professor Martin Cormican said the amount of vaccine distributed so far is not enough to reduce the spread of the virus in the community, and the more people come together indoors, the faster the virus spreads.

Prof Cormican said the number of new cases being reported was disappointing, and urged the public to "be very careful" as "there is a risk wherever people come together".

He said that while the situation in hospitals has improved and transmission in schools remains stable, there has been an increased spread in workplaces and other settings.

"It makes no difference to the virus if it's a wake or a birthday party," he said.

Meanwhile, a school in Co Tipperary closed and sent all of its students home due to concerns about the virus.

The primary school made the decision to close this morning and parents were sent a message asking them to collect their children as soon as possible.

Its understood the decision was made by the school while it awaits a full public health assessment and its not yet clear when the school will reopen.

Figures from the Health Protection Surveillance Centre show that over one in four Covid-19 cases in the past two weeks are still under investigation - representing almost 1,900 cases in the 14 days to 20 March.

Of the 7,395 cases during that period, over 50% were close contacts of a confirmed case; almost 20% were community transmission and there were 112 patients who caught the virus in a healthcare setting.

Prof Cormican also said it is "reasonable and proportionate" to keep the list of countries affected with mandatory hotel quarantine under continual review, adding the main concern with incoming travellers is the risk that they will bring a variant of the virus into the country.

Elsewhere, the Chairperson of The Federation of Early Childhood Providers has said it is time to prioritise the sector for vaccination and provision of antigen tests.

Speaking on RTÉ's Drivetime, Elaine Dunne said it was time for the Government to realise that those in the childcare sector are frontline workers, and that they cannot operate in a socially distanced way in their job.

She was speaking after two crèches were hit by Covid-19 outbreaks, in north Dublin and in Co Offaly.

Ms Dunne said there are 20 confirmed cases of Covid-19 in a crèche in Tullamore, affecting 12 children and eight staff, but they are waiting for more test results this afternoon.

Another crèche in north Dublin is dealing with several cases of the virus.

Ms Dunne said the owner of the crèche in Tullamore was contacted by a staff member on St Patrick's Day to say she had tested positive for Covid-19.

She said the HSE commended the owner on her policies, procedures and protocols in place, that she had done everything correctly, but the area where she is "is a community full of Covid at the moment".

She said the crèche is closed until Friday and it will be re-assessed then.

Meanwhile, the majority of the population stayed local, within 10km of home, during the week ending 12 March, according to the Central Statistics Office. 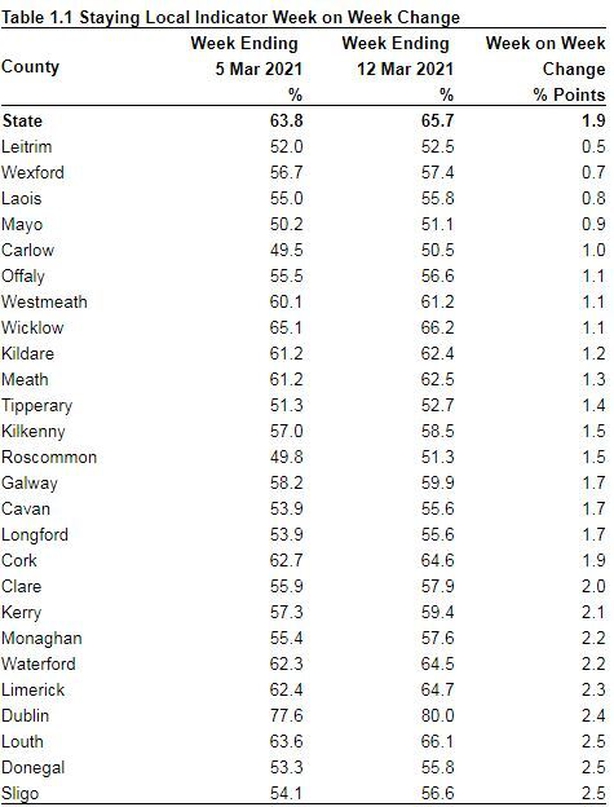 Its latest figures show that an estimated 65.7% of people stayed local in the seven-day rolling average.

Dublin continues to be the county with the highest percentage of the population staying local at 80%, reflecting its urbanised nature and access to services compared to other counties, the CSO said. 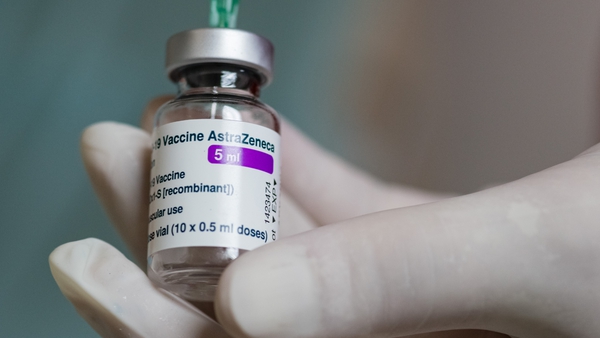