People aged between 16 and 69 who are at very high risk of developing severe Covid-19 have been moved up the list of the Government's vaccine allocation strategy.

The strategy, which had originally been met with criticism by patient advocate groups, has now been updated by Minister for Health Stephen Donnelly after the National Public Health Emergency Team endorsed recommendations by the National Immunisation Advisory Council.

The new rollout strategy means the order in which people will receive the vaccine has changed.

People aged 65 and older who live in long-term care facilities and frontline healthcare workers have already been vaccinated under the first two stages of the strategy announced on 8 December last year.

Under stage three, Ireland is currently vaccinating people aged 70 and older, starting with those aged 85 and older.

The provisional vaccine groups that were announced in December would have seen other healthcare workers vaccinated next, followed by people aged 65-69, key workers, and then people aged 18-64 with certain medical conditions.

However, the updated strategy changes the allocation of vaccines in these stages.

The new fourth stage of the roll-out, which comes into effect after all those over the age of 70 are vaccinated, will see vaccines going to people aged 16 and 69 who are considered at very high risk of developing severe Covid-19.

This includes people in this age group who are severely immunocompromised, obese above a certain BMI, have uncontrolled diabetes, undergoing certain treatments for cancer, and/or are living with certain chronic illnesses.

The Government's criteria for this cohort is explained in the below chart. 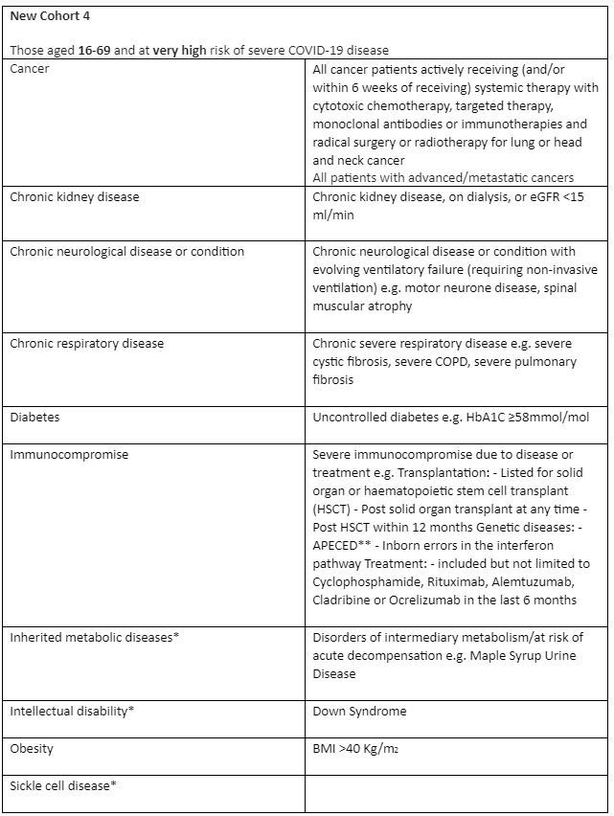 The next group, cohort 5, involves people aged 65-69 who have a high risk of severe Covid-19 disease due to other underlying illnesses such as chronic heart disease, severe asthma, schizophrenia or bipolar disorder.

The criteria for this cohort, which features the same conditions as cohort 7, are explained in this chart. 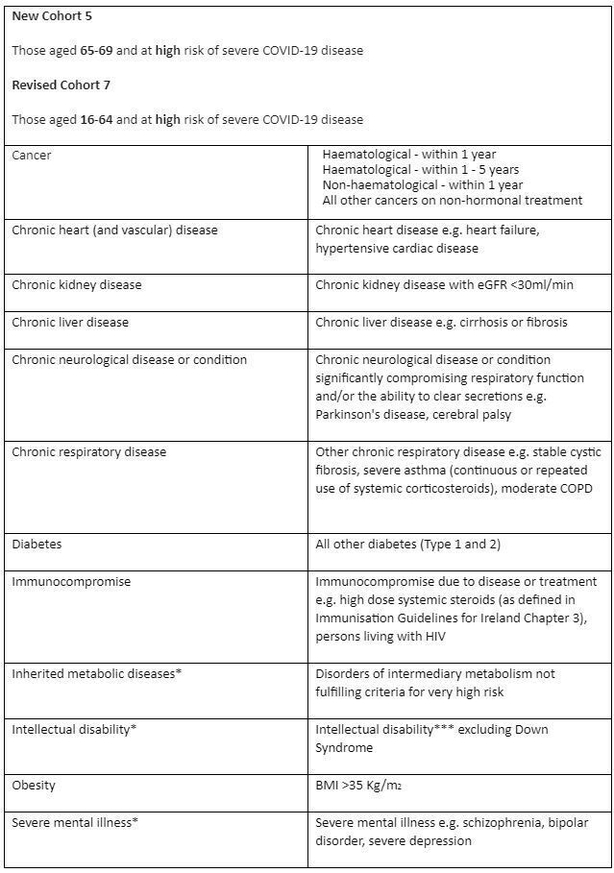 After people aged 65-69 with the above conditions are vaccinated, the Government's strategy will focus on cohort 6.

This includes anyone else aged between 65-69, other healthcare workers who are not in direct contact with patients, and workers essential to the vaccination programme.

People in this group will be vaccinated in parallel, as outlined in the below chart.

The roll-out strategy will then focus on people aged between 16-64 who have the same conditions as the people aged 65-69 who were vaccinated in cohort 5.

Mr Donnelly said the overall aim of the strategy remains the same.

"We are continuing to vaccinate those who are most likely to suffer severe disease and sadly, death, as a result of contracting Covid-19," he said.

"The changes we are making are based on the latest clinical and medical advice that those we are moving up the list would suffer the worst outcomes if they were to get the disease," he added.

The Department of Health said more national and international evidence has become available to provide a more detailed analysis of which conditions may increase the risk of developing severe illness or death.

Medical conditions and the magnitude of the risk they pose will continue to be monitored and periodically reviewed.

"Accelerating the vaccination of those with certain pre-existing conditions is consistent with the advice given to Member States by the ECDC," Minister Donnelly said.

NIAC has also recommended that while any of the three currently authorised vaccines can be given to adults aged 16-69, mRNA vaccines should be preferentially given to those aged 16-69 years at very high or high risk who have certain medical conditions which may limit their immune response to the vaccine.

Preferential selection of an mRNA vaccine should not result in a vaccine delay of more than three weeks, as any benefit of using a higher efficacy vaccine may be lost.

Taoiseach stakes it all on Covid vaccine roll-out