There were double celebrations for nursing home resident Norita Mills this week - not only did she mark her 102nd birthday but she also became the first resident at Dublin's Beneavin House to receive the Covid-19 vaccine.

Norita, who celebrated her birthday at the First Care Nursing Home in Glasnevin with a socially distanced party and cake, is the home's oldest resident.

"For 102, she's the sharpest tool in the box. You'll never pull the wool over her eyes ... that's for sure," said nursing home team leader Anthony Core.

He added that there is always "plenty of banter".

"I know she's an elderly lady but at the same time she still has a sense of humour," he added.

"It was no problem. I'm one of those people, I just have it done and it's over."

It comes as Minister for Health Stephen Donnelly said that by Wednesday night almost 122,000 Covid-19 vaccines had been administered to frontline healthcare workers, as well as to residents and staff in nursing homes. 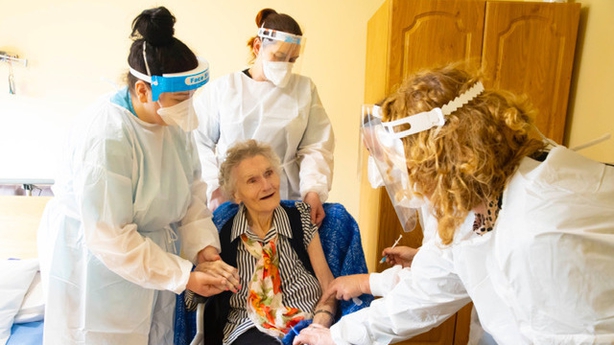 "It was no problem. I'm one of those people, I just have it done and it's over," Bridget said.

"You miss your family and you miss your visits of course but that's part of the way they take care of us."

She said all of the residents at Beneavin are excited to get the vaccine and she "didn't hear anyone say they didn't want it".

Like many nursing homes across the country, the past year has been a difficult one for the more than 100 residents at Beneavin.

"We're not allowed gather in groups. When we play our bingo there are only so many of us, but we're apart," Bridget said.

She said the last time she went outside the home to somewhere like the shops "must be nearly a year ago".

Bridget said it is very strange because she was used to going out and meeting people.

However, she still gets to walk outside within the grounds of the home.

"You miss your family and you miss your visits of course but that's part of the way they take care of us," she said.

Bridget was diagnosed with Covid-19 last April, but thankfully her symptoms were mild.

"I didn't feel sick but I tested positive for it so I was in isolation for two weeks," she said.

"It was hard not getting out, not mixing but the staff are keeping the residents safe and they're doing a very good job of it here."

While it has been tough at times for residents at Beneavin, Covid-19 has also been a challenge for staff.

"It's an opportunity to see their families again without wearing face masks and have hugs and kisses. Hopefully eventually that will happen."

"I was working on the Friday just as normal and then all of a sudden on the Sunday there was a sudden onset of symptoms," he said.

"It was a scary time. It makes you second guess everything. Even for example being on the bus, you're constantly watching people ... they might wipe their nose and then all of a sudden they're touching the bars."

He added that "maybe before you wouldn't notice small details like that" but after coming back to work he was "a lot more wary".

He said staff tried to keep the residents as engaged as possible.

"We actually had Zoom calls and things with a lot of family members and did fitness classes to keep residents active and keep up their muscle mass."

Senior manager with the First Care Group Linda Nugent described the roll-out of the vaccine in Beneavin House as "a new beginning".

"It's an opportunity to see their families again without wearing face masks and have hugs and kisses. Hopefully eventually that will happen," she said.

Ms Nugent said the nursing home has "done its best" to bring the community and families into the facility.

The home has also tried to keep levels of social contact with families up for residents during the pandemic via FaceTime and other social media but Ms Nugent said "it doesn't really substitute for that hug".

"When the guidelines allow, we also do in-home visits and window visits," she said.

This optimism seems to have filtered through to the residents, with Bridget Ryan already making plans for her birthday in a few months.