The Chair of the Irish Epidemiological Modelling Advisory Group Professor Philip Nolan has said that while case numbers of Covid-19 appear to be stabilising, "our health services remain very much under strain and very much under threat and will do so for the coming weeks".

Speaking at this evening's National Public Health Emergency Team briefing, Prof Nolan said the five-day case average of 5,283 has begun to stabilise, compared to 6,000-7,000 cases per day on average a little over a week now.

"It does look like we are beginning to turn a corner," says @President_MU. He says the demand for Covid-tests remains very high, but the positivity rate has fallen | https://t.co/Oae0QTuHiF pic.twitter.com/0VN6DvtrCm

Prof Nolan said the early signs of improvement are coming from such a high level of disease but that "our health services remain very much under strain and very much under threat and will do so for the coming weeks".

Another eight deaths related to Covid-19 have been reported by the Department of Health, it brings the total number of deaths to 2,352.

Prof Nolan said the number of cases in the last two to three weeks essentially dwarf the two preceding waves of the disease.

He said the current wave of disease makes the October wave of the disease look relatively small.

Prof Nolan said that means that one in 76 of the entire population has been notified as Covid-positive in the last fortnight. 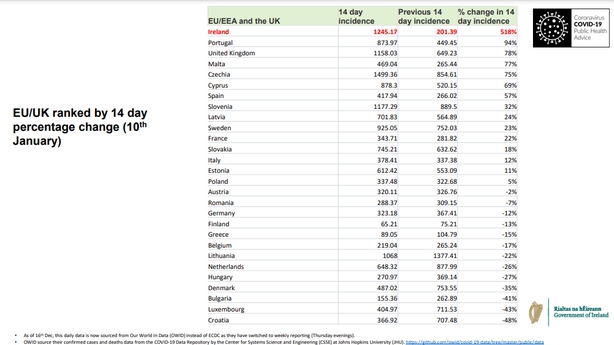 In Northern Ireland, a further 16 people with Covid-19 have died, 15 of which occurred within the past 24 hours, the health department has confirmed.

It takes Northern Ireland's total number of virus-related deaths to 1,476.

An additional 759 cases were also confirmed in the region - a fall of just over 350 on yesterday's number.

The Chief Medical Officer, Dr Tony Holohan, said "we are the worst in Europe in terms of percentage deterioration and heading for one of the higher countries, in terms of overall incidence".

He said a significant number of people are losing their lives and they expect to see an increase in those numbers in the coming weeks as a result of the transmission that has already happened or is likely to happen in the coming weeks, even though it is an improving situation.

Dr Holohan said there is no reason to believe that we can not turn this around very quickly.

Dr Holohan said no single factor led to the surge in Covid-19 cases but he said research showed that levels of socialisation increased very quickly in the run-up to Christmas, some which reached pre-pandemic levels.

He said it was as if in the population there was nothing happening, that there was no pandemic. 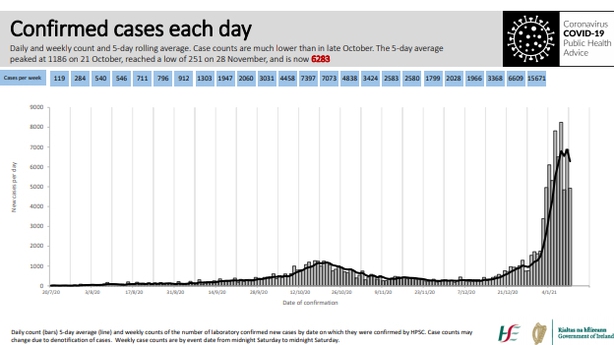 He presented figures which showed that during the move from Level 5 to Level 3 in December the levels of retail activity rose to summer levels and later to pre-pandemic levels.

He said the levels of activity in the grocery and pharmacy sector and traffic in the days running up to Christmas also moved to pre-pandemic levels.

He said there has been a significant decline in all these activities since then.

The Director of the National Virus Reference Laboratory Dr Cillian de Gascun has said the UK variant was detected in the first week of November and "it may well have been here in late October", but they do not have samples to go back that far.

He said from the start of this year, they will be using a new sampling framework, which will give a more representative sampling that they can look at on a weekly basis.

Dr de Gascun said the virus is likely to become more transmissible because the virus is "becoming more used to us".

He said he fully expects the UK variant to become the more dominate one here but he said that does not mean that public health measures will not be able to bring it under control.

Half of people in ICU with Covid-19 are on ventilators

About half of the people in ICU with Covid-19 are on ventilators to assist with their breathing.

The HSE's Clinical Lead for Intensive Care, Dr Michael Power, said of the 146 patients with Covid-19 in ICU, 76 are being ventilated.

Dr Michael Power, the HSE's Clinical Lead for Intensive Care, says 76 of the 146 people in ICU with Covid-19 are on ventilators to assist with their breathing | https://t.co/Oae0QTuHiF pic.twitter.com/P5uvxAbc0l

Dr Power said staff are being redeployed across the hospital system to deal with the increasing pressure on ICUs.

He said the HSE is very grateful to those who have been deployed and appealed to other nurses to do this to help with the surge.

He said he hoped that this will help build supply ahead of demand.

But he said the number of healthcare staff out of work due to Covid-19 is a concern and a challenge.

Ireland now has the highest daily number of new confirmed Covid-19 cases in the world for every one million people, according to figures published by the Our World in Data organisation. 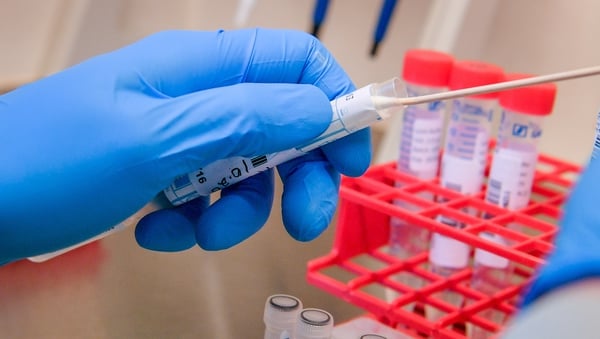