Pfizer has said its mRNA vaccine candidate does not contain foetal cell lines.

It questioned the use of human foetal cell-lines with origins in abortions, being used in the development and production of some vaccines for Covid-19.

Foetal cell lines were used to create vaccines for diseases such as hepatitis A, rubella, and rabies.

Most vaccines currently available were developed using cell strains cultured from two foetuses that were aborted for other purposes in the US during the 1960s.

The bishops said it was morally permissible for Catholics to accept vaccines with foetal cell lines, especially if the potential risk to life or health is significant or if a more ethically acceptable alternative is not readily available.

However, Pfizer, which rolled out its vaccine in the UK this week and is likely to be the first vaccine used in the EU, says it does not contain any such cells.

A spokesperson confirmed that it is a synthetic pharmaceutical product.

Ireland will align with the guidance offered by the European Medicines Agency (EMA) when it makes a decision on vaccine authorisation.

The EMA is due to decide whether to authorise Pfizer's vaccine for EU countries by 29 December.

The death toll in Northern Ireland now stands at 1,099 with 56,719 confirmed infections.

Minister Swann said some pro-life activists are criticising a vaccination programme that will save many lives. 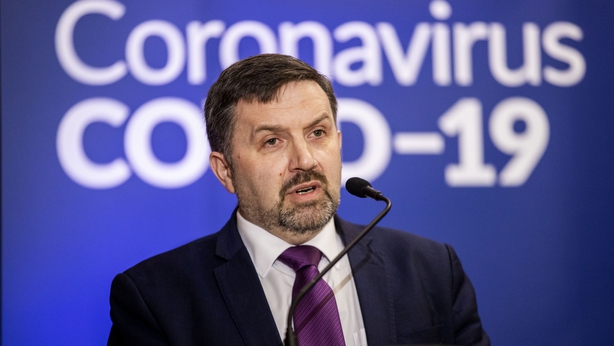 He said: "The Covid-19 vaccination programme is not compulsory. People are entitled to their own views and I fully respect that.

"However, they are not entitled to mislead others and potentially deter them from taking a vaccine that will protect them from a lethal virus.

"Making unfounded claims on social media is overstepping the line and I urge them to think again.

"Firstly, it should be stressed that the Pfizer vaccine does not contain any human cells.

"Secondly, and crucially, it must be remembered that vaccines have saved millions of lives worldwide."

In a statement, Mr Swann said: "We need widespread take-up of the Covid-19 vaccine in Northern Ireland to protect the population, particularly older and vulnerable citizens in our community.

"Widespread take-up will also help us move gradually towards the easing of restrictions in society.

"It is disappointing that people calling themselves pro-life would be objecting to vaccination programme that will save many lives."

It is the case that the development and testing of some vaccines can include the use of human cell lines grown in labs, having been replicated from feotal cells obtained in previous decades following abortions.

Mr Swann said: "If people want to object on those grounds and leave themselves unprotected from Covid-19 that is their choice.

"They will be at odds with other pro-life advocates including the Irish Catholic Bishops' Conference who issued a very clear statement this week.

"Any link between any vaccination development and abortions is incidental and remote, involving cells replicated in labs.

"As the Irish Catholic Bishops' Conference stated, refusal to accept a vaccine could contribute to significant loss of life in the community and especially among those who are most vulnerable.

"In matters of conscience, I believe saving the lives of our fellow citizens in the here and now must come first."