The latest National Public Health Emergency Team briefing has heard that the infection rate is "static" and no further improvements are expected in coming weeks.

The briefing heard that there have been six further deaths and 183 new cases bringing the total to 73,228 cases.

However, Deputy Chief Medical Officer Dr Ronan Glynn said a technical issue may have led to an under-reporting of around 100 cases.

There have been 183 cases of Covid-19 and six more Covid-related deaths reported by the Department of Health.

Dr Ronan Glynn has said this may be an under-report of up to 100 cases due to an IT issue | Read more: https://t.co/FQAxvsK6bI pic.twitter.com/d2hQDqn3uT

Dublin accounts for 56 of the cases, 26 were detected in Donegal, 13 in Limerick, 11 in Kilkenny, 11 in Monaghan with the remaining 66 spread across 15 other counties. 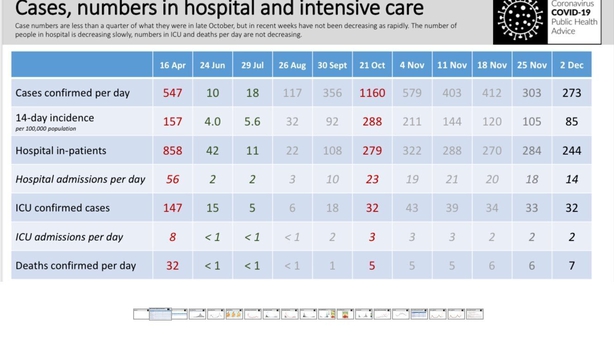 There are 32 people being treated for Covid-19 in intensive care units across the country, up one from yesterday.

As of 2pm, there were 239 people bring treated in hospital with Covid-19. There were ten additional hospitalisations in the past 24 hours.

Chair of NPHET's Irish Epidemiological Modelling Advisory Group Professor Philip Nolan said there has been huge improvements in Covid-19 indicators compared to the end of October.

There have been huge improvements in Covid-19 indicators compared to the end of October, Professor Philip Nolan has said.

Professor Nolan said the rate of testing is high by international standards and the positivity rate remains at around 2.7%, which he said is more or less constant.

He said there had been rapid decrease in cases in early November but this is slowing.

The number of cases dropped from 1,200 to 264 and it had been hoped to get the numbers lower but this has not happened.

Prof Nolan said we are at a "constant level of disease" and have reached the full extent of gains over the past six weeks.

If the reproduction number rises to 2 over the Christmas period it would significantly accelerate the spread of Covid-19, Prof Philip Nolan has said.

He said this would see between 800 and 1,200 cases a day by mid-January | Read more: https://t.co/FQAxvsK6bI pic.twitter.com/sifLWSTkS7

The infection rate is "3 to 4 times greater" than we would have liked and he urged people to use "extreme caution" to avoid a surge of infection over Christmas and the New Year, he added.

In relation to the 'R' number he said two to three weeks ago it was in the region of 0.6 but now it is closer to one.

There is a concern that the 'R' number could reach 1.4 unless people are exceptionally careful to restrict their movements, Prof Nolan said.

Where we find ourselves in January depends very much on the mantra that every contact counts and the more contacts we have the higher the reproduction rate, the higher the number of cases, Prof Nolan added.

He said his personal target is to limit close personal contacts to four people a week and said it is up to each of us to keep level weekly contacts as low as is reasonable.

Prof Nolan said numbers had been trending down to an R number of 0.7 to 0.9 and it was reasonable to expect further gains but that has not happened.

The 'R' number is now close to 1 and case numbers are static. He said he is "not disappointed just realistic" and we need to keep contact numbers down.

Chief Medical Officer Dr Tony Holohan said there is an average of three contacts per confirmed case, which he said was too many if we are to maintain the current level of infection. 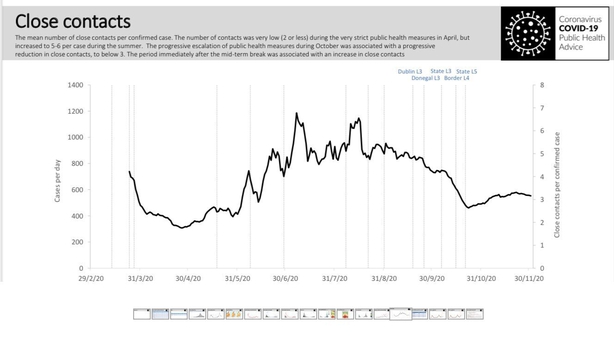 He urged people not to engage in "discretionary socialising" over the coming weeks and asked people not normally resident here to put off coming home and for people here not to take foreign holidays.

In relation to vaccines, Dr Holohan said they were another means to guard against Covid-19, but he warned that it would not mean the end of other hygiene measures.

However he added that this will not do away with the need for social distancing measures in the coming weeks and months | Read more: https://t.co/FQAxvsK6bI pic.twitter.com/NHXIDm2yht

He said vaccination will start with a particular cohort of people, but for the rest of the population there will still the need for a high level of compliance with the guidelines on public health.

Dr Holohan said vaccine misinformation was becoming a growing issue and concern. He said vaccines are one of the most cost-effective interventions ever provided by science to protect public health.

In addition, Dr Glynn urged people not to rely on unsubstantiated information online about Covid-19 vaccines. 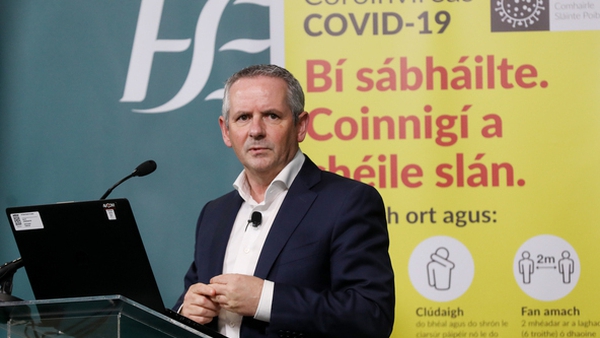