It has been a busy week of news about Covid-19, with Level 5 restrictions eased on Tuesday and positive news on the development of potential vaccines for the coronavirus.

Tere have also been 183 new cases of the virus, and six Covid-related deaths, reported by the Department of Health.

Both the Health Service Executive and the National Public Health Emergency Team held press briefings where a number of these issues were discussed.

Here are five things we learned from both briefings:

The CEO of the HSE, Paul Reid, has said Ireland has capacity to acquire 16 million doses of Covid-19 vaccines.

He said that while "there will be no shortage of the vaccine", the fact that they will arrive at different stages means that there will be a "prioritisation process", which is currently being finalised.

The health chief said it is "realistic" to expect the vaccine programme in Ireland to start in Ireland in early January of next year.

Mr Reid also said that the HSE has taken deliver of nine ultra-low freezers at start of this month to store vaccines, in particular the Pfizer vaccine, which has to be stored at -75C.

Paul Reid says Ireland overall will have the capacity to acquire almost 16 million doses of a Covid-19 vaccine. He added that "although there will be no shortage of the vaccine", they will arrive over an extended period of time | https://t.co/cxqof20NLh pic.twitter.com/fE0iWxHayV

The HSE chief cautioned that the vaccine will "not be our first line of defence".

He said there is a risk from a HSE perspective that people will lose "the great basic principles" that have helped to slow the spread of Covid-19 during the year to date.

Misinformation about vaccines is a concern

Speaking at the second of the day's two briefings, Chief Medical Officer Dr Tony Holohan said misinformation about vaccines generally, and the Covid-19 vaccine in particular, are a cause for concern.

Dr Holohan said vaccines are one of the most cost-effective interventions that have ever been provided by science to protect public health.

He said the authorisation processes being carried out by the European Medicines Agency on Ireland's behalf are "very exacting" and will ensure appropriate decisions are made.

He said vaccines are one of the most cost-effective interventions ever provided by science to protect public health | Read more: https://t.co/FQAxvsK6bI pic.twitter.com/42GgSsZmfA

His deputy, Dr Ronan Glynn, said there are a very small but very vocal group of people who are opposed to all vaccines, while many others have legitimate concerns about the Covid-19 vaccine.

Dr Glynn said we need to be careful not to mix these two groups up.

He said it is "very understandable" for people to have concerns about the vaccine, but urged people not to rely on unsubstantiated information that they read online about vaccines.

HSE Chief Paul Reid said "further lockdowns" may not be needed in the new year, but only "if people follow all of the precautions" if mixing with others over the coming weeks.

He said the reopening of restaurants and gastropubs gives people a "great opportunity to meet with friends and family".

However, he said the HSE was encouraging everyone to "keep a heightened level of guard".

HSE's Paul Reid says as people meet up in the coming weeks, he urges them to "keep a heightened level of guard at all stages" | https://t.co/cxqof20NLh pic.twitter.com/GWhJOQD1TN

Mr Reid said people will naturally want to hug each other and wish each other a happy Christmas, but warned this will pose "an extreme risk".

He said the risk for individuals during the phase leading up to Christmas is that if they are infected, or a close contact of a confirmed case, then they may have to spend Christmas Day in isolation or with restricted movements. 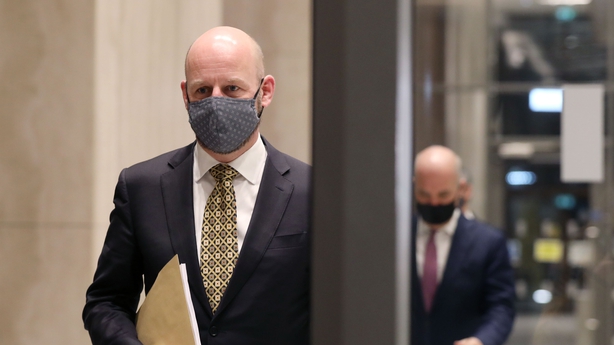 Professor Philip Nolan, the chair of the Irish Epidemiological Modelling Advisory Group, said this evening that his personal target is to limit close personal contacts to four people a week.

He said it is up to each of us to keep level weekly contacts as low as is reassonable.

Ireland is on the way to reaching a "key milestone" of having completed 2 million tests for Covid-19 later this week.

Speaking earlier this afternoon, HSE Chief Executive Paul Reid said that over 1.9 million tests have been carried out since the outbreak began

The demand for Covid-19 tests has decreased by over 50% over the last six weeks.

The detection rate over the past week is approximately 3%, he added. This is down from a peak of over 7% on 26 October.

Paul Reid says it is likely that Ireland "will reach a key milestone" of having completed 2 million Covid-19 tests later this week | https://t.co/cxqof20NLh pic.twitter.com/dV0WC9QARk

The HSE's National Lead for Testing and Tracing, Niamh O'Beirne, said that over 85% of people get their result within 36 hours of their swabbing appointment.

The R number, or reproduction number, which shows how much Covid-19 is being transmitted throughout the country, remains below 1.

The HSE's Chief Clinical Officer, Dr Colm Henry, said there is a "continued state of steadiness in disease indicators", with the 14-day incidence rate of the virus per 100,000 people at 84, which is down from a peak of 307 on 26 October.

He also said the R number is estimated to be between 0.8 and 1.

Professor Philip Nolan said there is a realistic concern that we might see a reproduction numbers of around 1.4 over Christmas unless we are exceptionally careful to restrict our movements.

He said a R number of between 1.2 and 1.4 over the festive period would see us having between 300 and 600 cases a day in the second week of January.

Prof Nolan said that if the level of social mixing over Christmas is higher, and the R number reaches 2 for a brief period between 22 December and 6 January, we could see between 800 and 1,200 cases a day by mid-January.

If the reproduction number rises to 2 over the Christmas period it would significantly accelerate the spread of Covid-19, Prof Philip Nolan has said.

He said this would see between 800 and 1,200 cases a day by mid-January | Read more: https://t.co/FQAxvsK6bI pic.twitter.com/sifLWSTkS7