The Minister for Agriculture told the Dáil he was only informed yesterday about an issue relating to defective hand sanitisier used in schools and healthcare facilities.

Charlie McConalogue said that tests began on suspect batches of ViraPro hand sanitiser as far back as September after the European Anti-Fraud Office notified Revenue about issues with the product in Denmark.

He made a statement to the house this evening in which he confirmed that it was known on 16 October that the product "did not meet the standards of approval".

The Minister said that his Department should have issued a public notice at that point and should have informed other Government Departments who had been using the product.

He has ordered a review of what had unfolded so that "the system of regulation is robust".

The Minister said lessons needed to be learned about what had happened and how the issue was communicated to the public.

He said the primary responsibility for the recall of the product lay with the company who had been behind its distribution, and he said when it became clear they had not taken steps to recall the product, his Department took the decisions to issue a public statement on the matter last night.

Throughout the day Mr McConalogue faced repeated calls to appear before the Dáil to explain why the recall of the hand sanitiser was not made public on Tuesday of this week when its approval was revoked.

ViraPro was used extensively in schools, nursing homes and healthcare facilities until it was recalled.

The Minister said tonight that his Department contacted the Health Service Executive on 21 October about the issues with stocks of ViroPro it held.

This conflicts with what the HSE told RTÉ News today, namely that it was only informed yesterday.

Also tonight, the Department of Agriculture said a  number of other sanitary products under the Virapro brand were not on the Department's approved list for biocidal products.

The company concerned has been advised to withdraw all of these products from the market, it said in a statement.

"The Department is therefore advising, on a precautionary basis, that all sanitary products in the ViraPro range should be returned to the supplier. Members of the public are advised to stop using these products because they are not authorised for use."

Meanwhile, the Department of Education has told RTÉ News that it was told of the faulty hand sanitiser and given the name of the product range on Tuesday.

However in a subsequent clarification it acknowledged that it had received information on Tuesday, including the name of the product.

Schools have questioned why they were not informed of the problem until late Thursday night.

The Clinical Director of the National Poison Centre, Dr Edel Duggan, has said parents should seek advice if their child has exhibited headaches or blurred vision over the past couple of days.

The recall of ViraPro hand sanitiser was confirmed to RTÉ News last night and the Department of Agriculture said it was removed from the Biocidal Product Register due to possible public health concerns.

The department said ViraPro PCS 100409 was recalled as prolonged use "may cause dermatitis, eye irritation, upper respiratory system irritation and headaches".

According to the Department of Agriculture's Biocidal Product Register, the hand sanitiser should have been "withdrawn from use" on Tuesday.

The HSE confirmed that the product is manufactured in Turkey.

It said that all stocks held by the HSE have been quarantined and a dedicated recall team has been put in place to coordinate the removal of all the product which is in the healthcare system. 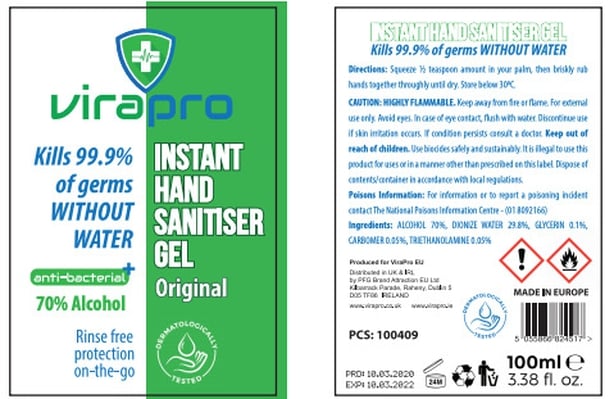 In a statement issued to RTÉ News, the HSE said: "This product is no longer legal for use or sale in Ireland and should be removed from circulation with immediate effect".

The company which distributes the hand sanitiser said it is contacting all its customers to advise them of the problem and is offering a full replacement.

The Portfolio Group said that it is 'very concerned' with the development.

In a statement issued to RTÉ News, it said: "We are grateful to the Department for its diligence. Following discussions with the Department, albeit at the time their concerns had not been confirmed, nonetheless we immediately sealed the product off in our warehouses to prevent any distribution of this batch."

The Portfolio Group said it has contacted the manufacturer of ViroPro which it said is "investigating the matter".

The Department of Education said schools using the sanitiser could close today if they choose and could not find an alternative.

It said funds would be made available to schools that needed to buy additional products as a result of the recall.

Assistant Secretary at the Department of the Taoiseach Liz Canavan says the Department of Education has advised all schools of the withdrawal from the market of ViraPro Hand Sanitiser due to possible public health concerns | https://t.co/adKnmJS2Xv pic.twitter.com/hJNmLXkBWk

The principal of St Patricks Boys' National School in Drumcondra in Dublin said a decision was taken late last night to close the school today as it could not replace the recalled ViraPro hand sanitiser as such short notice.

Speaking on RTÉ's Today with Claire Byrne, Natasha Bassett said there was no way to access an alternative supply after 11pm last night, when they learned via social media, that the product has been recalled.

She said that after such a difficult year, today was dress up day at the school and while this added to the disappointment for school children, it also slightly increased risks and added to the level of uncertainty.

Schools have been contacting worried parents to reassure them about the issue, many who had been using ViraPro confirming it was now withdrawn.

Our Lady Immaculate Senior School in Darndale in Dublin is one of a number of schools that has been using the product. Principal Derry Amphlett said it is being removed from the school, but no ill effects had been reported by pupils or staff.

A secondary school in the midlands said it has been using the product at the entrance to the building, but no student has reported ill effects.

A principal in another secondary school said she has been in the school since early this morning putting up signs advising students not to use the product.

A consultant in infectious disease at St Vincent's hospital, Professor Patrick Mallon has said the recall of the hand sanitiser from schools is an "unfortunate hiccup" which should not take from the vital importance of hand sanitiser and handwashing in the response to Covid-19.

Professor Mallon called on adults, parents and children to continue to focus on the importance of handwashing in the ongoing fight against the spread of the virus.

He said that parents "need to recognise that as we continue during a pandemic there is a need to focus on safety" and schools that closed today due to a lack of suitable hand sanitiser were making that difficult decision for safety reasons.

Mr Mallon said while the issue is having a severe impact on some schools, it is important that handwashing is the focus.