The extent to which Covid-19 can change the dynamic in a workplace or residential setting is starkly evidenced by the manner in which the virus took hold in the Nightingale Nursing Home.

The 31 bed facility outside the village of Ahascragh in Co Galway is the location of a major outbreak, with the vast majority of residents and staff infected.

The problems began to emerge at the weekend, when the HSE was informed that a resident, who had been admitted to hospital, tested positive for coronavirus.

That triggered swabbing of all staff and residents on Monday.

By the following night, the scale of the challenge facing all concerned was apparent with 25 out of 27 residents identified as having Covid-19.

One of the residents has since died. Two others have been admitted to hospital after their conditions deteriorated.

A total of 17 employees were also infected with seven out of eight nursing staff and ten of the 11 care assistants confirmed as cases.

While some residents and staff are asymptomatic at present, an adherence to self isolation protocols means the number of people available to work at the home has been dramatically reduced.

This morning, only the clinical nurse manager and a care assistant were able to attend for duty.

Staff at the home say they have appealed for assistance from the HSE but that the response has not reflected the scale of the gap in service as a result of the infections. 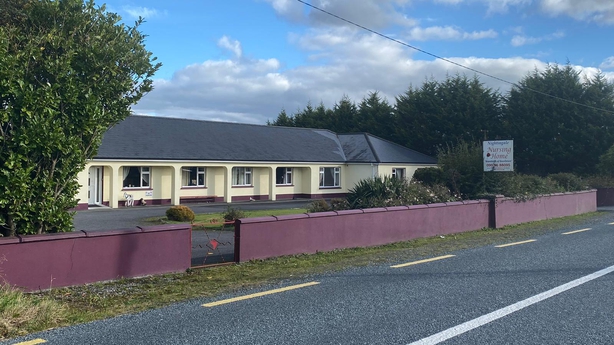 This evening, the HSE said "stable staffing" was in place for the next three days.

But with 17 staff members isolating until at least the week after next, there are concerns about the manner in which care will be provided at Nightingale until the end of October.

Relatives of some of those living in the home today spoke of how they held the facility in high regard. It has no previous outbreaks of Covid-19.

Stringent control measures have been in place since the start of the pandemic, with restrictions on visits and diligent cleaning protocols.

Páraic Mac Donnchadha, whose 92-year-old mother is one of the residents, told RTÉ News that "you could not even pick up a biro" in the building for the last seven months, such was the level of caution being employed.

Like many others, he expressed shock at the pace and rate of infection. He said he was worried for his mother's welfare but also mindful of the effect the outbreak would have on staff.

Céiteach Mac Stiofán, from Ahascragh, said people in the locality had been stopped in their tracks by the scale of the problems at the home.

He said the thoughts and prayers of those living in the small east Galway community were with residents and staff.

Earlier, broadcaster Mac Dara Mac Donncha, whose mother is a resident in the Nightingale nursing home, said the home was left with little choice but to make its problems public.

In an interview on RTÉ Raidió na Gaeltachta, he said the home had since been inundated with offers of help from people as far away as Kerry and Donegal.

They were prepared to come and work voluntarily there, in what he said was a wonderful display of community spirit.

Chief Operations Officer at the Heath Service Executive,  Anne O'Connor, said the HSE would be helping to staff the facility over the weekend.

She told RTÉ's Six One news the HSE is "challenged" in relation to agency staff and has found that many healthcare workers do not want to go into a place with an outbreak.

Ms O'Connor said that what is happening in nursing homes is a symptom of the growing community transmission.

Dr Martin Daly called on the HSE to continue to support the Nightingale nursing home for the next 14 days.

It was a tweet by the Ballygar GP earlier today that appeared to bring the issue into the public domain.

"I was very upset at how upset the nursing manager at the nursing home was over this, and the fact they had had little support from the HSE despite it being sought," he told RTÉ's Drivetime.

Dr Daly added: "It required the intervention of the media to raise this issue. An undertaking has now been given that more staff will be deployed to the nursing home."

Minister of State for Mental Health and Older People, Mary Butler, speaking on the same programme, said the Covid-19 cases in the Nightingale nursing home were seeded two weeks ago.

She said the virus is rampant in the community.

CEO of Nursing Homes Ireland Tadhg Daly told Drivetime: "We must redouble our efforts to put the sector on a stable footing as we head in to a challenging winter."

He said the level of community transmission of Covid-19 is "again having a disproportionate effect" on the nursing home sector.

Staff have been deployed to a nursing home in Co Galway where the vast majority of residents have tested positive for Covid-19, with an infection control team on site, the Minister for Health has told the Dáil | Read more: https://t.co/3BUtSHNfDo pic.twitter.com/ChUBqz8Lou

Mr Daly called on the HSE to "desist from recruiting staff from the private sector", as he warned that staffing remains the biggest challenge in the safe management of nursing homes.

He spoke to the Taoiseach two weeks ago and informed him that members are finding it increasingly difficult to hold on to staff due to the recruitment of tracers and swabbers.

Mr Daly said the reduction in the number of clusters in nursing homes during the summer months showed how the level of community transmission can affect residents and staff in these settings.

"It is a stark reminder of the need for all of us to adhere to public health guidelines."

Earlier today, Minister for Health Stephen Donnelly said some comments made in the Dáil about the Galway nursing home outbreak were "factually incorrect" and "spread fear and anxiety very wrongly in the community".

He said he could not go into detail about the circumstances of any individual nursing home, but that staff have been deployed there.

"The HSE is doing everything it can to protect nursing homes. The sort of comments that were made in here this morning are factually incorrect and they spread fear and anxiety very wrongly in the community."

Staff have been deployed to a nursing home in Co Galway where the vast majority of residents have tested positive for Covid-19, with an infection control team on site, the Minister for Health has told the Dáil | Read more: https://t.co/3BUtSHNfDo pic.twitter.com/ChUBqz8Lou

Speaking on RTÉ's Liveline, the Nightingale nursing home's director of nursing Patricia MacGabhann said she has tested positive for Covid-19.

"I want to go down there and get everything sorted, but I can't," she added.

"We are trying to keep our residents alive...we really feel abandoned," she said of the HSE's response.

She said the HSE had sent a nurse and a carer overnight which "took the pressure off". She was told "not to panic" and to "leave it with them".

However, Ms MacGabhann said that when the morning shift started today, there was "one nurse and one carer" looking after all the residents.

"It is uncivilised...we just want our older people to stay safe and the bottom line is, to stay alive."

In a statement, the HSE said it was currently providing supports to a nursing home in east Galway.

"The HSE is supporting the nursing home and is working to source staff. Additional supports include the provision of staff from Roscommon Hospital, Community Healthcare West and Saolta Hospital Group."