The Government has announced a further €16 million support package for pubs, bars and nightclubs, in what the two main bodies representing Irish publicans have described as a "paltry gesture".

The package will include a 40% top-up to the restart grant for those venues that remain closed to assist with their re-opening.

It will also waive court fees and associated excise and stamp duties relating to the renewal of pub and other liquor licences in 2020.

To qualify for the scheme, companies must have 250 employees or less; turnover of less than €100,000 per employee; and reduced turnover by 25% as a result of Covid-19.

The Licensed Vintners Association and the Vintners Federation of Ireland have said the package "shows how little regard this Government has for the troubles of the pub industry".

"This is the third time the reopening of the pubs has been delayed and they have had weeks to put a package together," LVA Chief Executive Donal O'Keeffe said.

"We had been calling for a plan to support the pub sector since mid-July and this is all the Government managed to put together. It is disappointing in the extreme."

He said publicans "are facing into an autumn of uncertainty with no guidance from Government about how and when they will be allowed reopen".

"The Government is allowing thousands of pubs wither on the vine and the damage being done to local communities across the country is incalculable," he said.

Tánaiste @LeoVaradkar announces there will be a 40% top-up in the restart grant for pubs, bars and nightclubs that remain closed to help them to reopen. | https://t.co/sl5fKQvmnp pic.twitter.com/TSuIKLV8GF

At a media briefing after Cabinet met this afternoon, Tánaiste Leo Varadkar said the decision not to reopen pubs will be a real disappointment to publicans, staff and their patrons.

He said the National Public Health Emergency Team was working with the Government on protocols that might allow for the reopening of pubs in the future "if the virus starts going in the right direction again".

But he said he could not put a date on that at the moment.

Speaking at the same briefing, the Minister for Public Expenditure and Reform Michael McGrath said the Government was trying to give pubs that remained closed a "fighting chance" of surviving.

He described the new measures being announced to support the industry as important.

Mr McGrath said that as moratoriums began to expire on loans, he hoped that the banks would show forbearance to allow their customers to get through the current period.

The Tánaiste said Ireland is the only country in Europe where 'wet pubs' - those that do not serve food - remain fully closed.

He said there had only been "one significant cluster" of cases in restaurants here to date. 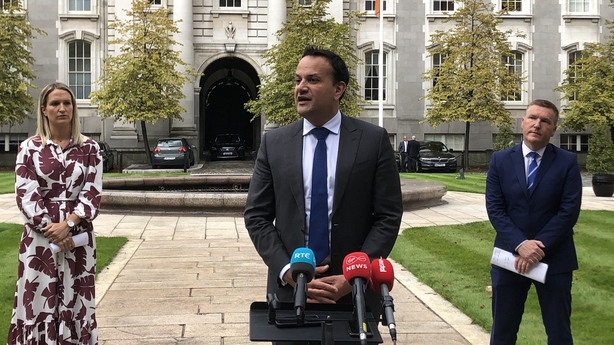 Mr Varadkar said he wanted to make sure that as many pubs that can reopen will reopen, adding that pubs were important to Irish culture, in both urban and rural areas.

He said he would like to see bars being given a chance to prove that they can reopen safely, but he said we needed to first see cases of the virus fall.

Mr Varadkar said the Government was still asking people to limit their number of social contacts.

He said that over 90% of clusters of the virus had occurred at private homes, "and not just house parties" he added.

Mr Varadkar said we had seen some scenes that had been quite concerning in recent weeks, where social distancing had broken down.

The 40% top-up to the restart grant is too little too late, according to the Labour Party's enterprise spokesperson.

In a statement, Aodhán Ó Ríordáin said the Government needs to move to announce supports for wet pubs immediately.

"Warm words from the Tánaiste and Government will not guarantee the survival of our pubs," he said.

The Drinks Industry Group of Ireland (DIGI), which is the umbrella organisation that represents Ireland's drinks and hospitality industry, including pubs, restaurants, hotels, off-licences, brewers, and distillers, also criticised the measures.

"Pubs in Ireland have been closed for almost six months, significantly longer than any other EU country. There has still been no explanation from the Government as to why Ireland is a special case.

"Furthermore, the Government have not provided any certainty or even a rough timeline for pub re-openings. This is little comfort for the thousands of business owners who face the real prospect of permanent closure, and soon," said DIGI in a statement.