69 new coronavirus cases have been confirmed in the Republic, 29 males and 40 females, bringing the overall number to 292.

Of the new cases, 48 are in the east of the country, 13 are in the south, five are in north west and three are in the west.

A further ten cases have been confirmed in Northern Ireland, bringing the total there to 62. Overall there are 354 cases on the island of Ireland.

In a new development this evening it was conformed that the Government is to pay GPs a new fee for COVID-19 telephone consultations and respiratory checks, on both public and private patients, under a new deal seen by RTÉ News.

It means patients will not face charges for these services.

GPs are to be paid €30 for telephone triage calls with patients on COVID-19, under the deal reached following talks involving the Irish Medical Organisation, the Department of Health and the HSE.

The fee will be covered for medical card and private patients.

If a COVID-19 test is required, the result will be sent to the GP and where a second telephone consultation with the patient is needed, a further payment can be claimed by the doctor.

If a GP invites a patient for a respiratory assessment in their surgery, a fee of €75 will be paid by the State to the GP.

A series of other non-COVID19 supports have also been agreed, to help GPs manage the situation for other patient consultations.

Earlier, the CEO of the Health Service Executive, Paul Reid has said we are in a race against time and appealed again to the public to support efforts to combat and slow the spread of the virus.

Around 80% of Covid-19 cases will be a mild to moderate illness, close to 14% have severe disease and around 6% are critical.

69 new Covid-19 cases have been confirmed by the Dept of Health, bringing the overall number to 292. The number of tests carried out has increased to 6,636 as people are urged to continue to observe social distancing guidelines | Read more: https://t.co/LJmjYlOSGn pic.twitter.com/eRDsvdmrA1

Thirty thousand Covid-19 testing kits are due to be delivered to Ireland on Thursday and the Chief Operations Officer at the HSE said it is even possible that the country could run out of testing swabs by then if that delivery does not arrive on time.

The HSE said this afternoon that their immediate focus is in the limited time that they have is to ramp up the resourcing of contact tracing management programme and teams.

Already 19 Covid-19 testing hubs have been set up around the country, including one at Croke Park in Dublin with more expected to be rolled out in the coming days.

In addition, clinical assessment hubs are to be set up all over the country where doctors will be able to assess infected people who are worried about worsening symptoms, to see if they can be still be treated at home rather than in hospitals.

Mr Reid said that he will be meeting the operators of the country's private hospitals in the next 24 to 36 hours and expects to reach an agreement with them about the use of private beds and facilities.

Earlier, the Minister for Health said the effects of the coronavirus will last for many months and the fallout could potentially go well beyond that.

Speaking at a press conference, Simon Harris also said the top priorities for the next the next government will be steering the country through this global pandemic on the public health front as well as protecting the economy from it.

He said it will be with us for quite a period of time.

Mr Harris said the private hospital sector has been engaging with the HSE in relation to the use of beds and facilities, and that he hopes a swift agreement can be reached. He said there are 1,900 hospitals beds in the private sector and 164 ventilation rooms.

The minister said that efforts are under way to maximise capacity, and added that he was very confident that an agreement can be reached.

The next seven days will be critical in the fight against the spread of the coronavirus, he said.

Those with other non-coronavirus ailments have been advised to contact their GPs by phone saying people still had to mind their own health.

The conference also heard that a decision has been made to make sure that every newly graduated doctor is offered an internship here in Ireland.

Mr Harris said there are well over 1,000 graduates looking for a job here, and that it was so important to continue testing for Covid-19.

"We have made a conscious decision to test as many people as we can. This will mean a massive number of tests being done."

He added that they would need to source capacity beyond private hospitals. He said CEO of the HSE Paul Reid was looking at care facilities and hotels.

Meanwhile Dr Colm Henry, clinical lead of the HSE, has said there are "large volumes of people" waiting to get tested for Covid-19.

He said there will be delays getting people tested and that it is difficult to carry out the test in the time that patients would like.

He said it is important that people self isolate while they are waiting for their tests to be carried out.

He said the first line of defence remains testing, contact tracing and self isolation.

Earlier, Minister for Finance Paschal Donohoe insisted that any response from his department must be proportionate and consistent with public health policy.

Speaking on RTÉ's Morning Ireland, Minister Donohoe acknowledged "the strain that the retail and many parts of our economy are under".

However, he refused to be drawn on whether Government would cease VAT payments for businesses, or whether they would introduce a "decree" to force non-essential businesses to close down.

Mr Donohoe said that his Department was already planning for a recovery and said "we [have to] handle these matters in the same spirit that our public health crisis is now being handled at the moment - we have to be honest, while offering justified hope.".

He added: "I think it's also important to emphasise the ability that we have to recover. We can recover from this public health challenge."

Mr Donohoe said that further announcements would be made later this week to alleviate pressure on people and businesses.

However, he pointed out that the spread of the coronavirus is expected to grow and that there will be "a relentless campaign over the coming weeks and months to tackle the virus".

It comes as Chief Executive of Retail Excellence David Fitzsimons forecast that another 200,000 more people will lose their jobs by the end of the week on top of the 140,000 who have already been put out of work because of restrictions arising from the cornavirus.

He called for, among other things, a decree today suspending all non-essential commerce, the introduction of a business boost grant and the suspension of VAT and rate payments for a year. 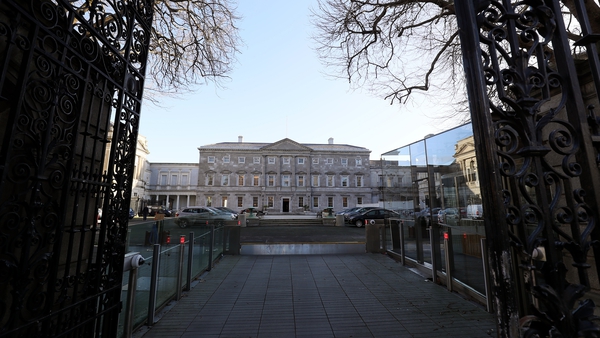