A case of the coronavirus has been confirmed in the east of Ireland, according to the Health Protection Surveillance Centre.

The patient, a man in the eastern part of the country, is receiving appropriate medical care, according to the HPSC.

It said the patient was identified and tested in line with established protocols for the investigation of suspect cases of Covid-19.

The case is associated with travel from an affected area in northern Italy, rather than contact with another confirmed case.

The Director of the HPSC said efforts are under way to identify and locate people who came into close contact with the man.

Dr John Cuddihy said the "contact tracing process has commenced" but he said it is "too early to know the detail" of how many people came into close contact with the man.

He said the work will involve identifying "all stages of the journey" made by the man and "it might include a variety of different settings."

Dr Cuddihy said "it is a process and we are being very thorough, so it will take some time, but the people who need to be notified will be notified" and given the necessary advice.

The Chief Medical Officer at the Department of Health said "the procedures that are now kicking into place take some time, which is not to say that they don't happen with any degree of urgency".

Dr Tony Holohan said "significant numbers of public health doctors are now mobilised in relation to this case" as part of the effort to identify and locate people.

Dr Holohan would not be drawn on whether the man had been on the same flight as a woman who was diagnosed with Covid-19 in Northern Ireland earlier this week.

However, he said the case is associated with travel from an affected area of northern Italy, as opposed to contact with another confirmed case.

He also said they "won't be confirming" if the man used public transport but he said if it was used, it will form part of the contact tracing by the public health authorities and if people need to be followed-up, that will happen.

Dr Holohan said the reason that certain details are not being released is in order to protect the confidentiality of the patient.

"We have nothing to hide, but we have something to protect," he added.

He said "we have been preparing for this eventuality for months" adding that shows the policies and procedures in place here have worked.

Deputy Chief Medical Officer Dr Ronan Glynn said the man being treated is "in the care of health service staff" and is not at home self-isolating.

He said "all the receiving hospitals have isolation rooms in place and are in a position to assess and treat a case as necessary.

Dr Glynn said a case in the Republic of Ireland "is not a surprise and is not unexpected."

He said "it changes nothing in terms of our approach", adding that the country remains in a containment phase.

Dr Holohan said he expects "there will be further cases" and that "we have a high likelihood of containing the cases" with the infection prevention control measures that are in place.

However, he said, based on advice from the European Centre for Disease Prevention and Control, planning is also under way to deal with any spread of the coronavirus here.

He said the ECDC has categorised the likelihood of a widespread community transmission, similar to what happened in Italy, as moderate to high elsewhere in Europe.

Dr Tony Holohan, Chief Medical Officer with the Department of Health, speaks at a press briefing tonight after the first case of the coronavirus was confirmed in the Republic | Read more: https://t.co/och2EC7QGS pic.twitter.com/VnDFHbj2dS

Earlier, Taoiseach Leo Varadkar and Mr Harris held a conference call with their counterparts in Northern Ireland regarding the coronavirus.

They discussed the situation regarding the virus on the island of Ireland, and also internationally, and noted the good cooperation in place between authorities North and South.

All agreed to continue with their close cooperation and to remain in close contact in the period ahead.

Govt urged to focus on national planning over virus

Meanwhile, a healthcare expert from the Royal College of Surgeons said the urgency of Covid-19 merits the cessation of government formation talks and for political leaders to instead focus on national planning to deal with an outbreak of the virus here.

Professor Sam McConkey, Associate Professor of International Health/Tropical Medicine at RCSI, said he believes a higher level of planning, including the re-allocation of staff and funds to negotiate what is happening with coronavirus, is required.

Prof McConkey said the Government needs to make the public health concerns a top priority and liaise with all government departments about measures needed to limit the spread of the virus.

He said civil servants in the Department of Agriculture need to consider quarantine measures in the event of a widespread outbreak in Ireland.

Prof McConkey also said that an '"open, transparent national discussion" should take place to decide upon "acceptable levels of social control and social distancing" as Irish people are not used to being told what they can and cannot do.

He said the spread of the virus onboard the Diamond Princess cruise ship and across northern Italy showed that efforts to contain the spread had failed.

He said the "draconian measures" of mass quarantine and social distancing in China seem to have reduced the spread of the virus so Ireland needs to consider how best to approach an outbreak here.

The chief executive of the Irish Tourism Industry Federation has called for a "prudent but proportionate" response to Covid-19 as he expressed hope it would not affect the St Patrick's Day festival.

Eoghan O'Mara Walsh said the festival is "fundamentally important at shining a favourable spotlight on Ireland Inc" for trade and culture.

He said that public health must come first but he has his "fingers crossed" that the festival will go ahead.

Meanwhile, three more patients from England have tested positive for coronavirus, bringing the total number of UK cases to 23.

Two of the patients had recently returned from Italy and the other one from Asia.

The cases are in Gloucestershire, Hertfordshire and Berkshire. 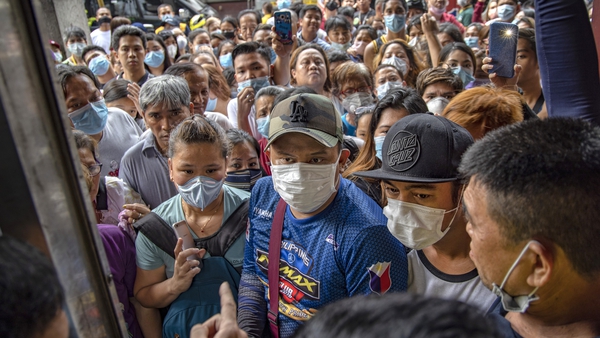 Coronavirus: Eight weeks that have shaken the world