The family of one of the two missing Coast Guard Rescue 116 crew members has said "we need those boys home" as she appealed to fishermen along the northwest coast to assist in the search for the missing men.

Orla Smith, whose brother Ciarán is lost at sea, said local knowledge was key to the effort to bring him and second missing crew member Paul Ormsby home.

Speaking this afternoon, Ms Smith said both families were devastated when their loved ones were not found with the wreckage of Rescue 116, when it was recovered from the water off Blackrock Island yesterday evening. 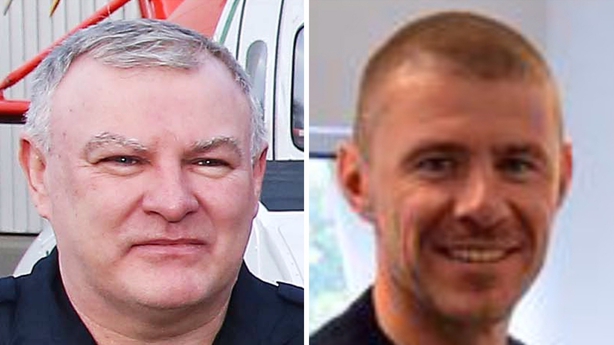 But she said they were still hopeful that their bodies could be found.

She said both the Smith and Ormsby families needed to get them home.

"It is a living nightmare for all of us ... we need those boys home now".

"We are doing our best to keep going and to stay as strong as possible and as positive as we possibly can but it is tough.

Orla Smith, sister of winchman Ciarán Smith: 'It is a living nightmare … We need those boys home now.' https://t.co/VUN0Ld0jXe pic.twitter.com/jQKkjp9q9p

Ms Smith said both families had been hugely comforted by the support and love that had been shown to them since Rescue 116 crashed on 14 March.

Fishermen from around Blacksod, Co Mayo, are willing to take part in a major sea search in the coming days in the hope that they can locate the men.

They are asking their counterparts in fishing communities along the Mayo and Donegal coastline to assist in a co-ordinated survey of an area stretching from Achill to Aranmore Island in Co Donegal.

Ms Smith continued: "To all fishing vessels, big and small, from Achill Island to Aranmore we are appealing them to please come and help us now.

"We need them, we need their knowledge. We need them to assist in the ongoing efforts to find Ciarán and Paul."

It is hoped that larger fishing vessels might also take part, so that the operation could extend around 35 nautical miles off shore.

The body of Mark Duffy was recovered from the wreckage over a week ago and Captain Dara Fitzpatrick died a short time after being rescued following the crash on 14 March.

The Air Accident Investigation Unit has said there was no indication of any mechanical problems in the seconds before the impact.

It is thought the inquiry into the cause of the crash is now likely to focus on operational issues.

This will take in a number of separate headings, as investigators analyse the flight recorder for any indications of what went wrong.

Investigators are likely to look at things like human behaviour, navigational equipment and procedural issues, in an effort to identify the exact reasons why Rescue 116 crashed.