Shares in Permanent TSB soared over 16% today after it announced a potential deal worth about €7.6 billion to buy some elements of Ulster Bank's business here.

The lender said it has entered into a non-binding Memorandum of Understanding with Ulster Bank owner NatWest regarding a potential acquisition involving certain elements of the Ulster Bank Retail and SME business in Ireland.

Earlier this year Ulster Bank announced a phased withdrawal from the Republic of Ireland over the coming years that will be managed in an "orderly and considered manner".

The bank, which is owned by UK lender NatWest, has 1.1 million customers here, along with 2,800 staff in 88 branches around the country.

It is expected that about 400 to 500 Ulster Bank employees, who are wholly or mainly assigned to the retail and SME loans that are being acquired, will transfer to Permanent TSB.

As part of today's potential deal, it is proposed that NatWest Group will become a shareholder of Permanent TSB and will take up to a 20% stake in the lender.

"We see this as a once in a generation opportunity to fast-track the growth of an Irish bank with a strong community and customer service ethos that has evolved over its 200-year history. It also supports the investments we are making in the transformation of our in-branch and digital banking services," he added.

Speaking on Morning Ireland, Eamonn Crowley said the Ulster Bank deal will be self-financing through the 20% stake NatWest is taking in PTSB and the cash PTSB will pay it.

As a result, he said, the bank does not intend to have to raise funds from existing shareholders, including the state which owns 75% of the bank.

The Ulster Bank loans being sold are linked to 100,000 customers, which breaks down roughly between 60,000 mortgage customers and 40,000 SME customers.

Permanent TSB currently has 76 branches around the country.

Two branches will be amalgamated when and if it takes on the 25 Ulster Bank branches and so the newly enlarged Permanment TSB will have a total of 99 branches if the deal completes.

PTSB had €14 billion worth of mainly mortgage loans at the end of 2020 and its CEO said the proposed deal with Ulster Bank will push its mortgage share above 20%.

In its statement today, Ulster Bank said there are other customers and customer products which are not covered by today's announcement and it will update on those as appropriate.

"While performing tracker mortgages are not part of today's MOU, Ulster Bank and NatWest Group are working on a similar pathway for these customers with strategic banking counterparties. We will update in due course on this," the bank added.

Ulster Bank said that while there is no change for customers today, over the coming months it will make a series of changes for its customers as it implements its phased withdrawal.

The lender said it will proactively contact customers when they need to move bank and or close accounts, adding that it will ensure that customers have ample time or notice periods as well as the support they need to complete the process.

"Branches will continue to play an important role and in the second half of 2022 we will begin to phase out traditional counter/ cash services to concentrate on in-person support to move bank and/ or close accounts," it added.

Ulster Bank Chief Executive Jane Howard said the bank was today announcing a significant update to its phased withdrawal process from the country.

"Our agreement remains subject to further due diligence, assessment and relevant approvals and may not result in a transaction," Ms Howard added.

"Today's agreement with PTSB, will provide a good solution for these customers and colleagues, building on our recently announced agreement with AIB. We remain in talks to find a similar constructive solution for our performing tracker mortgage portfolio," she said.

"We expect, in the coming months to have further updates to make to customers and colleagues on progress including on other products and services which are not covered by today’s announcement," she added.

AIB's main rival Bank of Ireland is in talks to buy the bulk of Belgian bank KBC's Irish assets, a move that could leave the country with just three retail banks.

The Irish and UK governments will effectively both be shareholders in PTSB upon completion, since NatWest remains 62% taxpayer-owned, a legacy of the financial crisis of a decade ago.

Finance Minister Paschal Donohoe said that while he acknowledged that significant further work is required before a final transaction is agreed, he believes a successful delivery of a transaction on the scale described in today's announcement would be a very positive development for both PTSB and the staff and customers of Ulster Bank.

"The successful conclusion of a transaction in line with that described in PTSB's announcement would be a very positive outcome providing a significant number of Ulster Bank customers with certainty as to the destination of their loans, and a large number of staff with comfort in terms of job security," Paschal Donohoe said.

"However, I appreciate that the conclusion of any transaction is subject to normal due diligence, further negotiation and agreement of final terms, as well as obtaining appropriate approvals," he added.

Paschal Donohoe said that for Permanent TSB, the acquisition of these loan portfolios would provide the bank with additional scale, further strengthening its role in the marketplace.

"With the withdrawal of Ulster Bank and KBC from the market, an enlarged PTSB has a more important role than ever in providing meaningful competition for consumers both in terms of product choice and pricing," he said.

"I am hopeful that these discussions will lead to a successful outcome and remain supportive of the bank as shareholder," he added.

The Financial Services Union has described today's Memorandum of Understanding as a positive development and a step forward.

General Secretary John O'Connell welcomed the commitment that a significant amount of staff will transfer to PTSB from Ulster Bank and that they will keep their current terms and conditions.

He also noted that some branches would also be taken over by PTSB.

"The withdrawal of Ulster Bank from the Irish banking market has caused huge anxiety for staff and customers," he said.

"This announcement provides some clarity and gives some reassurance for staff," he added.

However, Mr O'Connell said that a lot of unanswered questions remain and as a result the union has sought a formal meeting with the CEOs of both banks.

He also highlighted the issue of 600 staff based in Northern Ireland and said the union is now seeking assurances on job certainty for Ulster Bank staff based in Belfast. 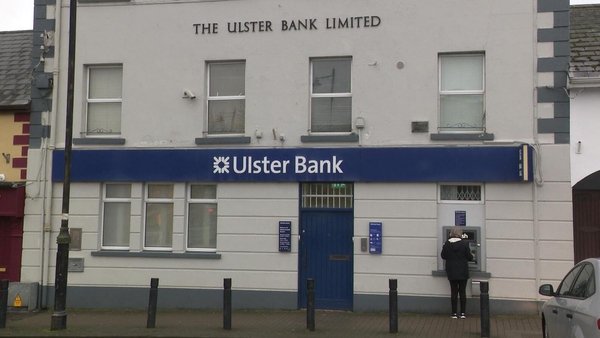 The 25 Ulster Bank branches to be bought by PTSB