Two students from the National School of Art and Design won the James Dyson award for developing a sustainable healthcare product called the Personal Patient Pack, that could dramatically reduce medical waste.

Best friends Máire Keehan and Hannah Grogan study product design at NCAD in Dublin. They specialise in designing medical devices, and together, they developed the Personal Patient Pack.

"The Personal Patient Pack reduces waste by 67% per patient by allowing single use devices that you would use at the scene of an accident to allow these devices to be carried with the patient throughout their healthcare journey, until they are discharged from hospital," Hannah explained.

"The pack itself can be laundered, and re-used and re-scanned again. You are not throwing out anything to do with the pack. 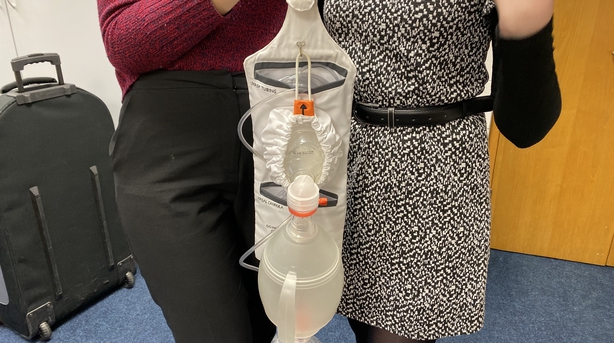 The pack is traceable to each patient. The students incorporated radio frequency identification, also known as RFID technology, into the pack.

"That means that you can scan the RFID technology with an iPad, and this can link with the app that we have designed that has the patient records implemented into it," Hannah said. "If this pack was to get lost at any stage of the patient's journey, you just have to tag the iPad with the pack, and it will say, for example, it's Mary Byrne's pack, bed 2, Ward 3. None of the patient's devices will ever be lost throughout their journey."

There is a lot of interest from paramedics and hospitals who are interested in the Personal Patient Pack. "We've been to the head of procurement at St James's Hospital, and he really welcomed the idea," said Máire. "He worked with us very closely, throughout the development stage. We know that nurses and doctors, and procurement RFID specialists, they're all on board. It's just a matter of testing an analogue pack without the technology to see how it goes. We have plans on how we can do tests to see if it's a viable solution."

Hannah and Máire also sought the opinion of Andy Lyle, Operations Director at Medicall Ambulance service. He was not expecting to be as impressed with the product as he and his colleagues were.

"We just thought it was a really clever idea," he said. "The reaction was pretty much the same; Why hasn't anyone thought of this before?"

The goal for a paramedic is to do what is medically best for the patient, and medical waste is not a consideration at the scene of an accident. "If there is a system in place or a device there for us to store the equipment, we'll use it and therefore save on disposable items," Mr Lyle said.

The HSE and the NHS have been in contact with Hannah and Máire to say they are interested in the product, and Minister for Health Simon Harris tweeted to congratulate them on the design and winning the Dyson award earlier this year.

Worst impact of virus on equity markets 'behind us'