The Government has signed the contract for the National Broadband Plan, paving the way for the start of the rollout of high-speed broadband to almost 540,000 premises around the country that currently cannot get it.

The inking of the contract by Minister for Communications Richard Bruton and David McCourt of the winning consortium, National Broadband Ireland, took place at a school in Laragh, Co Wicklow.

Speaking after the signing ceremony, the Taoiseach said the NBP is a national solution to a national problem.

Leo Varadkar added that NBP is about making sure no part of Ireland is left behind when it comes to jobs and services.

He said the opposition has had five months to come up with an alternative plan that would be quicker and cheaper, but had not.

He said if the contract had not been signed now, it would have put the process back another five years.

In relation to the risk of cost overruns, Mr Vardakar said he would wager that the cost would come in at less than the €3bn euro budget.

Minister Bruton said it had not been an easy project and has been challenging.

But he said the Government had developed a model with the consortium that will pass all the tests.

He added that an immense number of protections are in place in order to protect those depending on the plan and the state.

Speaking on Drivetime, Minister Bruton the average customer in a rural area will pay the same as a customer in an urban area for high-speed broadband.

Mr Bruton said a "controlled price of 100 euro will be paid to National Broadband Ireland (NBI) from the retailer".

He said it will be the responsibility of the retailer to charge each customer, "whether their customer is in Letterkenny or in Dublin".

It is understood that work on rolling out a high-speed broadband service to the 540,000 premises throughout the country currently without one is likely to begin in January.

However, it could be up to seven years before every last home or business is brought online under the €3bn plan, which will be implemented by the National Broadband Ireland (NBI) consortium. Initially, the focus will be on connecting 300 broadband connection points in community settings such as GAA clubs, community centres and public libraries across the country.

These shared hubs will provide a free high-speed broadband service to people living in rural areas while they await the arrival of a high-speed connection to their own premises.

Surveys of ducts, poles and other infrastructure will begin within the next two months, with the west and midwest likely to see the first work, RTÉ News understands.

But it will be the end of next year before the first of the more than half a million premises requiring a connection will receive one.

By the end of 2021, it is expected that a quarter or 130,000 of the total premises in the NBP will be online, with 40% connected by the end of 2022 and 95% of the population capable of receiving a high-speed service after year five.

Carrigaline in Co Cork, parts of Connemara in west Galway, as well as several counties in Kilkenny and Limerick will be among the areas where NBP activity will first start.

Further information on where the 300 Broadband Connection Points will be located is available at www.nationalbroadbandireland.ie.

Members of the public can also register on the website to receive updates on NBP rollout progress.

It will also soon become possible to check when an NBP connection is likely to arrive at a particular premises, by putting an Eircode for the property into the website.

National Broadband Ireland says around 650 people will be employed directly and indirectly during the first year of the rollout.

NBI says its current team of 60 will grow to around 225 during the first two years.

The NBP aims to bring high-speed connectivity to those living in rural areas who cannot get such a service from commercial operators, because it is too expensive for such companies to provide one.

In total, it aims to connect 1.1m citizens or 23% of the population, by enabling 540,000 homes, farms, businesses and schools in the intervention area to have direct access to broadband over fibre-optic cable.

However, urban areas without commercial high-speed connectivity, including parts of Dublin, Galway and Cork cities, will also get access via the service.

The original tender required a minimum download speed of 30Mbps, but NBI has promised to provide a minimum of 150Mbps rising to 1Gbps for those willing to pay for it.

The project will see the State paying a capped subsidy, contingencies and VAT totalling up to €3bn over the 25 years of the contract.

NBI is set to provide €220m in equity and working capital, as well as meeting uncapped financial obligations of around €2.5bn, excluding VAT, over the period.

These include performance bonds, as well as operating, maintenance, upgrade and revenue risks.

Analysis - Broadband plan reaches the end of the beginning

The NBP process has been running for seven years and has been beset by a series of delays, challenges and controversies along the way.

Eir and SIRO, two of the three bidders shortlisted by the project team at the Department of Communications, withdrew from the tendering process, leaving just one remaining challenger, National Broadband Ireland.

It later attracted criticism after the make up of the consortium appeared to change a number of times.

The final consortium is led by Granahan McCourt, a US based private investment firm that is focused on telecoms and technology, led by Irish-American businessman, David McCourt. 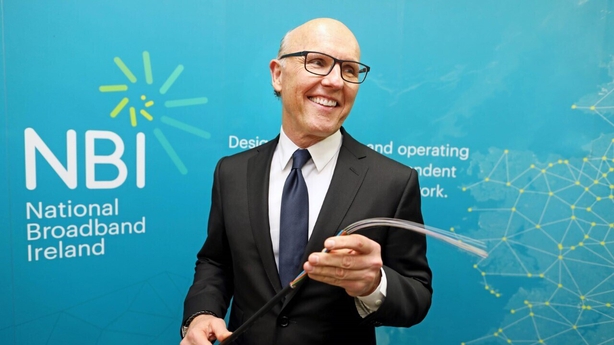 Other members include Mr McCourt's long-time associate and Berkshire Hathaway board member, Walter Scott, as well as enet, Actavo, KN Group, Nokia and the Kelly Group.

Just over a year ago, then minister for communications, Denis Naughten, resigned amid controversy about private meetings he had with Mr McCourt.

A Government commissioned review later found that the procurement process was not influenced by the contacts between the two men.

The cost of the plan to the State has also escalated considerably, from a predicted €500m to €3bn.

Earlier this year, it emerged that eir, the telecoms company that withdrew from the tendering process, had claimed it could complete the NBP for €1bn.

The Government has also faced criticism for its decision to opt for a model that will see NBI retain ownership of the network at the end of the 25 years.

Last week, the European Commission approved the NBP, saying it did not breach state aid rules.